Run a quiz by connecting a bunch of BBC micro:bits, via Wi-Fi, to the Ubidots IoT platform using a single XinaBox IoT Starter kit.

Run a quiz by connecting a bunch of BBC micro:bits, via Wi-Fi, to the Ubidots IoT platform using a single XinaBox IoT Starter kit. 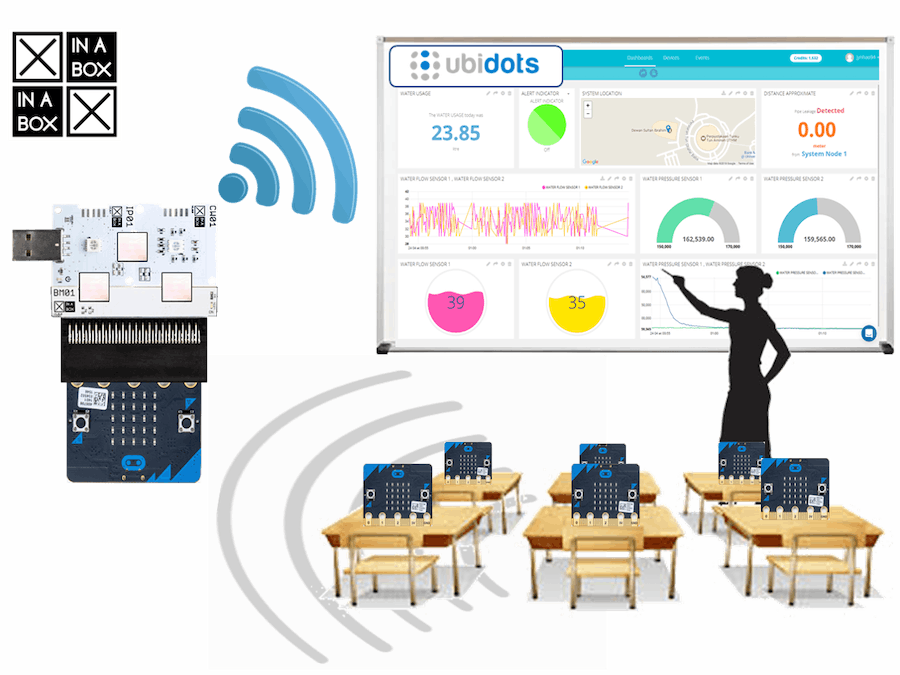 This post builds on a recent how-to I wrote that shows the reader how to connect a micro:bit to the Ubidots IoT platform via Wi-fi and using the XinaBox IoT starter kit.

With the functioning kit and connection to Ubidots from that how-to we will connect a number of micro:bits to create our own little 'IoT network'. This is a very simple IoT based voting app - each micro:bit 'votes' with their A-button or B-button. We'll show the results in our Ubidots dashboard. The process is summarised in the following image:

The process of conducting a quiz using a Wi-fi enabled IoT network of micro:bits

So if you haven't yet, pop over to this blog first to get connected.

To successfully build this project you should have the following:

Your assembled XinaBox IoT Starter kit will look something like the picture below. For the duration of this post I am going to refer to this as the MICROBIT GATEWAY:

A correctly assembled micro:bit XinaBox IoT Starter Kit - referred to as a gateway in this blog

We are going to enable the following process to unfold:

Whilst I will not go into any detail on this here, the code could be adapted quite easily to transfer other types of data, such readings from external sensors connected to the classrooom micro:bits or triggers that are coded onto the micro:bits.

Firstly, let me say to anyone not comfortable with MicroPython - there are only 4 edits in total that you need to make in the code to get it working and these are just entering things like Wi-fi password :)

When using radio on a micro:bit you will need to choose a few parameters. Feel free to change the ones I am using in the MicroPython code, but if you do just remember to change them in the code for both the classroom micro:bits and the gateway.

I've put a lot of comments in the code, most of which are just to explain what different bits of the code are responsible for. Comments are prefixed in one of 2 ways:

And please bear in mind the following:

This section relates to the Code for the Classroom Micro:bit that is appended to this post.

Each of our classroom micro:bits is going to use radio to send the following messages to the micro:bit gateway:

The NAME we give to each of the classroom micro:bits is important:

In the code it is called "thisMicrobitID". You must change it for each classroom micro:bit.

Edit the code as appropriate then flash onto the classroom micro:bit(s) you are using.

This section relates to the Code for the Micro:bit Gateway that is appended to this post.

The micro:bit gateway has to do the following:

There are a few edits you need to make in the micro:bit gateway code:

Once you've edited these items flash the code onto your micro:bit gateway.

Step 4: powering up all the micro:bits

Once you've flashed all the micro:bits with the appropriate code it is time to power them up and get started.

When you power up the micro:bit gateway this is what should happen:

The red square only appears when the gateway is booting up

Once the square disappears:

As the micro:bit and the CW01 start communicating a red tick flashes a few times

When the tick finishes flashing a sad face shows - this is OK. Its sad cos no one is sending it data. When the micro:bit gateway receives a radio signal from one of the classroom micro:bits and succesfully processes it we get another couple of ticks followed briefly by a happy face.

NB: click the A-button on the micro:bit gateway to initiate a new quiz. If you are not in test mode the gateway will not start processing messages until you click A. An up arrow appears briefly on the LEDs if all is well.

The classroom micro:bits display the following:

This confirms your message has been received and sent over to the CW01. If you don't see the ticks it may be for one of the following reasons:

If neither of these work, reboot the micro:bit gateway and try again.

I found that if I had my micro:bit gateway plugged in to a USB port on my laptop, and if I then plugged a classroom micro:bit into a different USB port on the same machine, my gateway would not work. Rebooting the gateway sorted it out for me, but be aware of this.

Step 5: Checking the data is received in Ubidots

Make sure your 'network' is powered up and running and click a few buttons on the classroom micro:bits to ensure some data is being send to Ubidots.

We need to confirm that it is being received there. Open up your Ubidots dashboard then wait 10 seconds or so - give Ubidots time to receive some data and process it. Then:

If everything is working properly, you should see each of the variables you are sending from your micro:bit listed here! You should also see the values change as new data is sent from the micro:bit gateway to Ubidots.

If you left the gateway code as is, the following variables should be listed:

The Devices / YOURMICROBIT view showing all variables we are sending

If you do not see your variables listed then check the following:

If all these items check out and still the variables are not showing, please get in touch with me and I will try to help.

Step 6: Using the data in Ubidots

We are going to set up a few different visualisations in our dashboard:

We will use a temperature gauges to show the total number of votes for the A-button and the B-button:

Your gauges should show up in your dashboard and should look something like mine below:

You might be wondering why I didn't make a pie-chart? It is the obvious choice, so lets make one quickly:

That should do the trick!

Bear in mind - the more data points there are (i.e. the more classroom micro:bits) the richer the visualisation will look. In the MicroPython code we flashed onto the micro:bit gateway you will notice that there is a variable called testMode. When you are using the code for a real quiz this should be set to False. By setting it to True we allow classroom micro:bits to vote many times on the same quiz. This ensures we have a wealth of data points to build our dashboard with.

2: Show the total number of votes

It is useful to know how many people have voted - especially if you know the total who are eligible to. For this section we will calculate this and then show it in a visualisation.

Although its easy to see how we can calculate total votes (countof_a + countof_b), we don't have a total number of votes variable that we can use. We'll have to create a new variable:

The red highlights show where to select Synthetic from the 2 views of the variables page.

We now need to create an expression to calculate the sum. Type the following in the area on the left:

Why did we have to use fill_missing above? Variables work a bit differently here than in MicroPython (or most programming languages). All raw data sent to Ubidots is time stamped, which means a variable is a named array of values & time stamped pairs. The time stamps for the values of countof_a and countof_b that we want to use here are different. So, when we try to add the variables, the system does not really know which values we want to add. By telling Ubidots to fill_missing we are effectively telling it to ignore the time stamps and just add the most recent values. My thanks again to S, the Ubidots support operator who helped me with this.

A gauge is a nice way to visualise this:

3: Have the results of a vote emailed to you

Once a vote is completed you press the A-button on the micro:bit gateway to start a new quiz. What we will do here is trigger an email to get sent when the A-button is pressed, and we will include the results of the vote in the email.

We use the event functionality in Ubidots. An event has 2 parts:

We have some challenges to overcome:

I came up with a work-around that is a bit hacky - I am sure there are better ways! My solution is based on the following observation:

Events have a trigger and an action. In events it is easy to use the last value of the variable used in the trigger. We therefore need to ensure that the last value we send is useful in this context.

So, in the MicroPython code for the micro:bit gateway, we do the following:

Hence, in Ubidots we can use summaryOfVote in 2 ways:

We now have what we need, so lets set up our event:

We now set our 'if' trigger. If something happens it will trigger Ubidots to react in a certain way...

So, this trigger is set off when the A-button is pressed on the micro:bit gateway and a previous vote has been conducted where 1 or more votes were recorded. We now need to specify the action that this trigger will initiate:

Percentage of votes for A = {{last_value}}

This should work... it was a serious Eureka moment for me when the email came through - I hope you feel a similar excitement!

You will probably have noticed that we are sending some variables I haven't used anywhere in the dashboard. I had plans for them, still do, but this is already quite long. Please have a play with them yourself and I'd love to hear about anything interesting you might come up with.

Also, where I've encountered issues relating to my lack of knowledge of how Ubidots works I've solved them in the micro:bit gateway MicroPython code. I think someone who knows the workings of their IoT platform more intimately then I do would be able to do a lot of the work I've done in Python on that platform.

Although I am quite pleased with the way this works the point of this project was not the quiz - it was to show how an entire classroom of micro:bits can be networked with a single XinaBox Wi-fi gateway. The underlying code proves that ANY data collection activity that you might use in a classroom could quite easily include an IoT element. Conversely, I think that if you are conducting a data gathering exercise using micro:bit it can be enriched greatly, and with little hassle / expense, by getting the data onto an IoT platform.

13 projects • 10 followers
Hobbyist: some of this I write from scratch, some I work with developers and test / edit. Java + micro:bit are my thing. Work at XinaBox.cc.
ContactContact