Monitor and control your garage door from the web.

Monitor and control your garage door from the web. 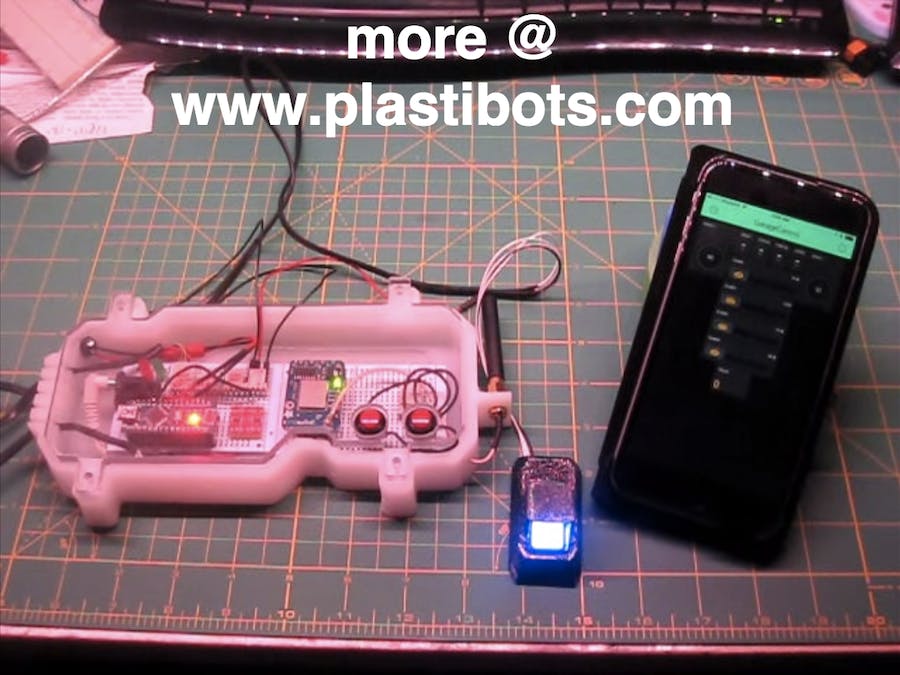 I’ve got a lot of stuff in my garage, and having 3 kids (one of them being me!) with forgetful minds, the garage door is sometimes left open over night.  I don’t really like that sinking feeling after waking up the next day to find the door was left open.  Between loosing valuables and critters that make a mess of garbage, I finally decided it’s time to take a stance!  I have an IP Cam mounted inside the garage and, for the past few years, have used it as a means to monitor valuables.  I wanted to take it to the next step by getting notifications of door status both inside my house (blinking LED in the hallway I could check before bed time) and on my various smart devices (iOs/Android).  I also wanted to be able to remotely open/close the doors as well as do away with the keycode entry system I have, and instead use a fingerprint scanner to open/close the doors.  (I’m good at scope creep).  During my daytime job I spend much of my time managing it, and, in my hobbies, loosing control of it! It’s my style, what can I say.

A full write-up with quality pics and details can be found here.

The project takes a number of features of the garage openers that are already in place.   I pulled additional lines from each opener that are uses for the manual opener buttons already located in the garage.   These are connected to 2 relays in the controller and triggered by Blynk or the fingerprint scanner.  I also added to limit switches to each door.  The circuit is closed when a door is fully open and open when the door closes.  These are used to feed status to the Open? LED’s in Blynk.  Wires for the open/close, limit switches and remote LED monitors all run into the enclosure.

The fingerprint scanner is going to be mounted outside in the elements.  Many hours were spent on Tinkercad designing an enclosure that would shelter the unit from the elements while still providing ease of access.  I also decided to take a gamble and try waterproofing the fingerprint scanner board.  After doing some research I came across NeverWet.  Although Rustoleum does not recommend it be used on electronics, it seems many people have tried with success, so I decided to roll the dice.  I decided to first try it on a spare Nano I had laying around.  After it was complete, I did the water dunk test and it worked fine.   It leaves a milky residue layer over everything.  I did some testing to see if the layer provided any conductivity which would be bad news – but did not detect any.   Afterwards, I took a chance on the Fingerprint Scanner, which also worked.   I’m still toying around with designs on the enclosure. Primarily to come up with something that provides better shelter from the elements.   As for functionality, the FPS allows for enrolment of up to 200 finger scans, so I can do the whole family.Latest Design:  Allows for a cover to protect the unit and will open/close on its own:

I am using Blynk to remotely monitor and control the garage doors.  The picture over there>> is the iOS version.  It’s a pretty slick app and approach.   You can create buttons, sliders, graphs, LEDs and tag them to Analog, Digital or Virtual Pins on your Arduino.  They can  be on the sending or receiving end of state changes.  The Analog and Digital pins match those pins on your Duino directly.  The real benefit is in the Virtual pins.  Blynk needs a method to assign actions to react, and uses Virtual Pins for this.  The idea is you assign a Blynk button to a virtual pin, then use a subroutine within your sketch to intercept the state change (i.e from 0 to 1) and then write whatever code you want to react.  In my case, when one of the door buttons are pressed, the function catches that, and triggers a door to open.    I added a password-like feature by using 4 sliders.  The concept is that you use each slider to identify a digit of a 4-digit password, then the app unlocks the buttons to open / close the doors for a period of time.  The Arduino sketch actually takes care of this.  The sliders will reset to 0 after a period of time.  Additionally, a LED illuminates when the correct password was entered.  Although it’s obvious that this whole approach is limited in security, it adds an additional level of obfuscation that does the trick for what I am trying to achieve here.  As they say, it keeps the honest people honest.Blynk is relatively new and  the developers are adding new functionality all the time.  I have high hopes for the upcoming LCD widget.  As my sketch has quickly approached the 32K limit, I will be looking to the LCD widget to offload some code responsibility to allow me to use the Blynk app to enrol new fingerprints to the scanner (amongst other things).  I’ll be using the LCD widget to relay next step text while enrolling.

Showing components hooked up via breadboard and the Blynk app customized with a few buttons and status LEDs.  If you are looking for an easy way to get our device into the IOT world, you have to check out Blynk.  It’s easy to setup and use.  Took me less than 5 minutes to get it integrated into this project!  The great thing about the app is that you simply download it, generate an Authorize token, open a sample Blynk app, add in the auth token and fire up the connection. Done.  The sample apps provide enough examples to get you started with building your project.

Final Control Board & Custom Enclosure with FPS ready for install:

This was one of my bigger projects as it contained many components and spanned both local control and the Internet via smartphone.  The enclosure was custom milled out of a single cutting board.  One of the biggest challenges I had was issues with the Nano / CC3000 freezing and locking up.  This not good as it required a physical power cycle.  This thing sat mostly complete on my desk for 2 weeks while I tried to figure out how to solve the issue.  I also used this as debugging time to see how long it would remain running.  Now that I have fixed the crashing issue, it has been running non-stope for days now.  More on that below.

The Nano/CC3000 crashed about once per day. The controller would lock up and could not be recovered without physically powering cycling the controller.   To deal with the issue I tried a few different methods:

It never fails…  Try as best as possible to re-create a similar environment to what it would be like in the garage, I ran into a few issues. 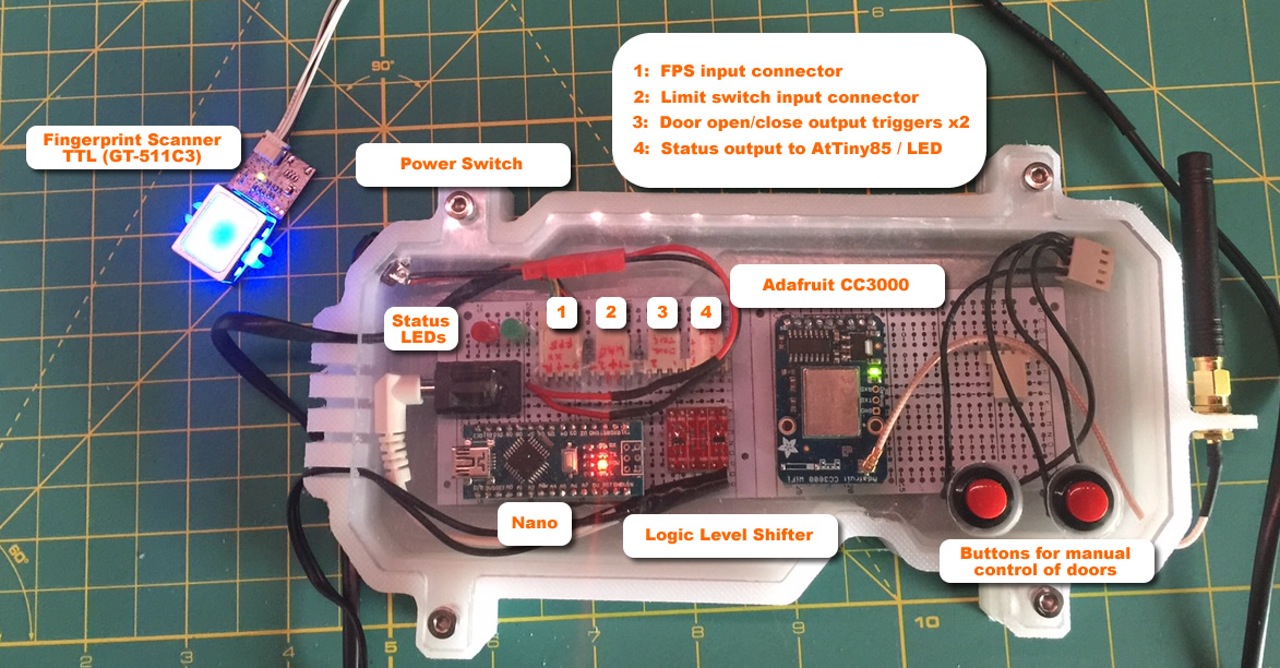