Many publications exist about moisture sensors for applications, e.g. plant watering systems. Making a DIY Sensor is fun and cost-saving.

Many publications exist about moisture sensors for applications, e.g. plant watering systems. Making a DIY Sensor is fun and cost-saving. 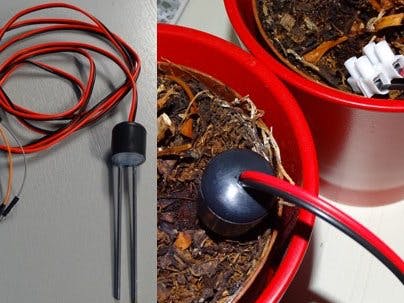 With the aim of building a system for watering a significant number of plants that are stored in a shed during the winter season, I searched the www to see what moisture sensors are available in the market. You will find many solutions. Most helpful was the publication from Andreas Spiess (I like his Swiss accent) on YouTube:

After seeing this, my conclusion was to make a sensor myself, because for my plant watering project (upcoming), I will need a few sensors for several plants.

I selected the ESP 32 as microcontroller, because of its multiple 12bits ADC inputs and the capability to generate PWM signals at higher frequencies than e.g. an Arduino Uno can do. In this project a 600 kHz signal will be generated for each sensor.

The Sensor is made of simple low cost materials that are widely available and it will be functioning as a capacitive moisture sensor.

Here you see the result:

The DIY Sensor is made with simple materials:

All the individual parts

The pins are cut from fondue forks, that are chromium plated which will help to avoid corrosion. The construction with a terminal block enables easy connection of the copper cable wires to the chromium plated pins. The pins (that do not bend), facilitate easy insertion into the soil of the plant.

How simple can it be!

As an indicator for the measured moisture levels, I am reusing the water level indicator developed for my previous project :

For making this indicator, see my previous project: https://create.arduino.cc/projecthub/Pedro52/arduino-esp32-diy-water-level-sensor-and-diy-level-indicator-3d513d?ref=user&ref_id=328463&offset=0

Step 4: The Electronic set up

In the breadboard set up, I used an ESP 32s (Node MCU). The reasons for this choice are as stated in the introduction.

My plan is to expand this set up with functionality for making a complete plant watering system with on-line monitoring and warnings. (the ESP 32 has WiFi and Bluetooth on board).

Fritzing diagram with set up for 1 sensor

The circuit diagram for the sensor is as follows:

The practical setup on the breadboard looks as follows:

Device under test on the breadboard

The ESP 32 is powered with 5 V from the USB port and has a 3, 3V regulator on board. One output GPIO pin is connected via a 10KOhm resistor to one side of the Moisture Sensor and sends a 600 kHz signal to the sensor during the 5 measurements (for a period of 5 seconds). One input pin of the ESP32 (12 bits ADC) is connected via a diode and an R/C network (1MOhm and 1 uF). The other leg of the sensor is connected to GND.

The sensor is only powered for the duration of the measurements to avoid electrolysis effects on the chromium plated pens.

The loop function in the Arduino Sketch is simple and consists only of the calling 2 functions:

The 1 second delay between measurements are just for experimentation and demonstration purposes. In practical applications this will be far less frequent (normally a few times per day, depending on how thirsty your plants are)

The plot monitor of the ARDUINO IDE as well as the serial monitor have been very useful during experiments. A view of the plot monitor graph is given below:

Readings from the plotmonitor of the Arduino IDE

Measuring the moisture levels is done with the following code:

Levels determined based on the measurements

Hereafter the bracket in which the average value falls is determined in accordance with the above table and the moisture level is indicated on the Moisture Indicator with a color, which is very easy thanks to the <Adafruit_NeoPixel.h> library:

For downloading the sketch through the USB port onto the ESP 32, it is required to hold down the Boot button.

I am interested to hear if someone is actually going to reproduce this project.