A plug-n-play device to give birth to bare bone clone Arduino by uploading bootloaders on different AVR chips.

A plug-n-play device to give birth to bare bone clone Arduino by uploading bootloaders on different AVR chips. 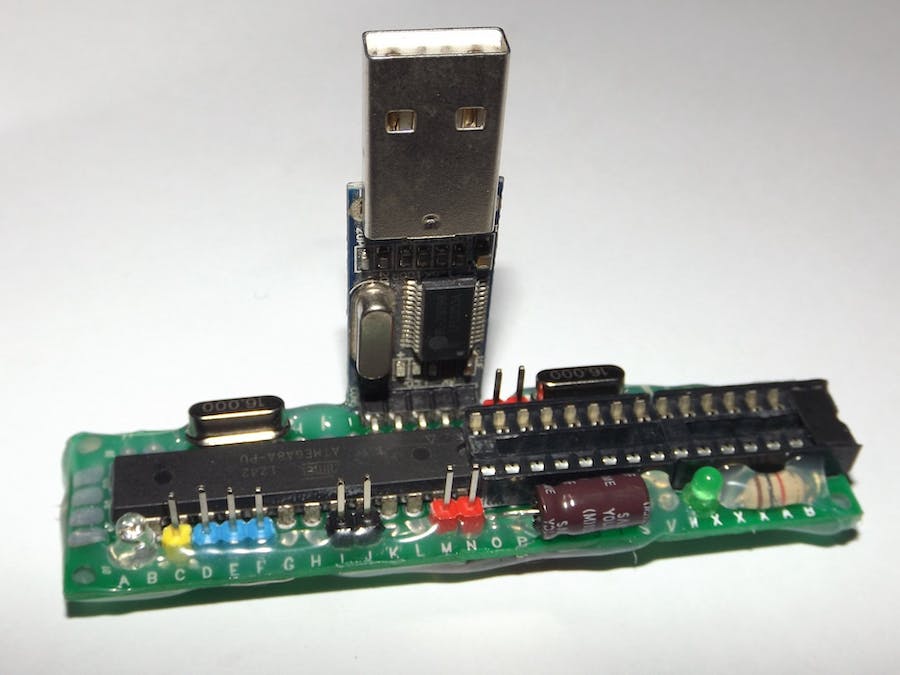 Every time you do a new project with Arduino, do you just buy a new board or rip off your last project to reuse Arduino?

Many of us just don't. Specially for soldered/permanent projects it's not the way to go. Many of us make a clone of Arduino by burning bootloader on virgin Atmega328P/168/8A or Attiny45/85 AVR microcontroller. There is a nice tutorial how to do so on Arduino homepage where an existing Arduino Board is used as ISP (In System Programmer). This project is just a permanent version of that method, a permanent Arduino ISP for plug-n-play burning bootloaders.

Step 1: Follow the Arduino ISP Tutorial and first burn a bootloader in a fresh Atmega328P with the help of an existing Arduino Uno board.

Step 2: Now swap the fresh bootloaded Atmega328P with the Atmega328P on Arduino Uno board. We are doing this, because the on board microcontroller already has the sketch/code for Arduino ISP program. Also placing the freshly burnt chip on Uno board will work - no worries.

Step 3: Now plug in the Prolific USB-Serial adapter into computer and install the driver. A new COM port will appear. In my case COM12. Then remove the USB-Serial adapter. (Show com port pic in h/w properties).

Step 4: Next, solder the USB-Serial adapter, IC socket, two 16 MHz crystals, LEDs and SPI+Power pin headers on the protoboard by placing the components on front side and connecting those components with wires on the back side.

Step 5: Finally insulate the back side with Hot Glue, fill the gaps among wires and wait for cooling up to five minutes. Now the Rig is ready. Expand your Arduino family and enjoy the fatherly joy!

Burning Bootloader with the Rig

Step 2: Run Arduino IDE, since the mother microcontroller already has the ISP programmer mode code in it, all we need is to do following 3 steps:

55 projects • 184 followers
"What Kills a 'Great life' is a 'Good Life', which is Living a Life Inside While Loop"
ContactContact