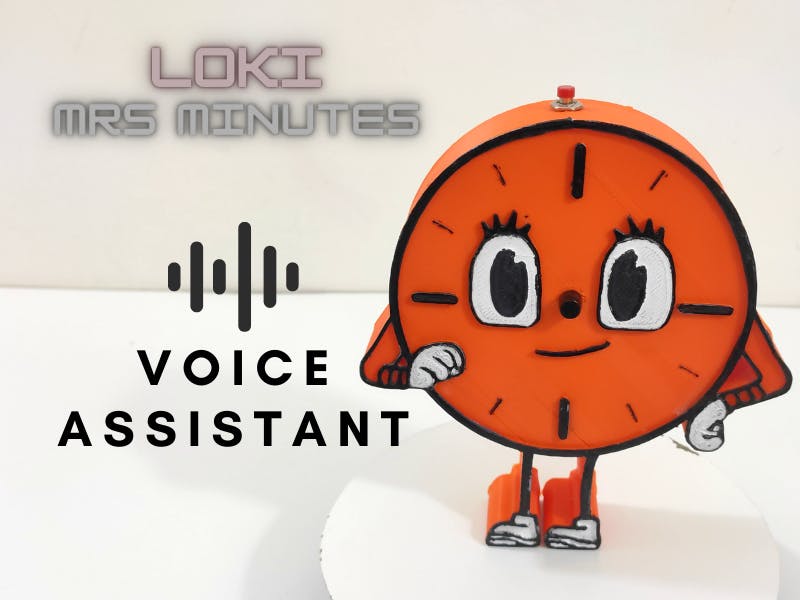 Just so you know, I’m a very big fan of marvel, and recently their new series LOKI is by far my most favorite series of all time. So, I thought it would be fun to make one of the characters come to life.

Meet Mrs.Minutes she is an AI character in Loki, who works for a fictional agency called Time variance authority which is controlled by Kang the conqueror. Mrs. minutes can do a lot of stuff in the series, she talks, interacts with other characters, and of course fetch data and information almost like Friday and Javis in Iron man movies.

So, that’s what I exactly did.

But I did cheat (or let's say borrowed a lot) a lot to get to this point. So, Make sure to read the full instructions to build your own AI Mrs. Minutes. Also, make sure to grab the supplies below to do the project with ease.

Before I started modeling I tried searching if someone has done a similar project already and I found this amazing Mrs. Minutes clock project by a Thingiverse user PhilippHee. But unfortunately at the time of documenting the project page is down on Thingiverse, I will make sure to update the link once the page is back up.

Anyway, I had downloaded the STL file a few weeks back. So, instead of me creating the project completely from scratch. I edited and remixed his project for my need by using fusion 360. You can see the images above to see how the image was modified to meet the need for this project.

Once the STL file was ready, it was time to print. I took the model into Cura and sliced it. You can either use a single color to print and then paint the eyes and the outlines on top of it. Or change filaments while printing as I did.

You can check this link to see how to change the color while printing just using one nozzle.

The above images are reference images where you need to pause to change the color of the filament.

To print this model I used PLA and a larger nozzle with a diameter of 0.6mm and a layer height of 0.4mm for faster printing. It approximately took 9 hours for the complete print for this model, during the print I had to change the filament 3 times. But still, I managed to mess it up by not selecting the proper layer height to change the color.

Anyway, this gave mean opportunity to explain, how you could change the color if you had not used the multi-color 3d printing technique.

Note: Don't make any large motions while removing the support material, the thickness of the face is very small and can break quite easily.

You can just stop here and continue with the rest of the tutorial but for me, the color wasn't that appealing so I fixed the color. I used a black marker for the outline and a whitener for the eyes. After messing with it for a while I changed the colors completely! You can see in the image above It looks way better than the original color I printed it with.

Since the 3d model is ready we can start with the brain for Mrs. Minutes.

Before messing up with voice assistance let’s deal with the hardware issue we have first. You can see raspberry pi zero w does not have any sort of Audio input or Audio output.

To fix this I used a USB sound card with a micro USB to Full-size USB adapter. This will take the audio input and output through USB and send it to respective audio peripherals.

For the audio input, let’s use a collar mic because this will nicely fit within Mrs. minutes nose. But the 3.5mm stereo jack that comes with the mic won’t work with the sound card. So, I replaced it with this audio jack. And for the audio output, we can use any regular speaker. But in this case, we’ll end up building an audio amplifier circuit as well. So, instead, I’m going to use a desktop speaker which is power by USB.

This might seem a bit tricky to set up, but it’s fairly easy and even the google assistant service documentation page have a hardware guide on how to set up the speakers and microphone.

Now check the microphone and speaker connection by the command

Note down the card ID and device ID.

Once you have the ID, create a new file called .arecordrc in /home/pi using the below command

paste this code into the nano editor

And replace the Card number and device number with the ID you found in the previous command. Then press ctrl+X to exit and press Y to save the file.

You can use this command to record the audio

and this command to play the audio you recorded.

Then create a new project, and you set any arbitrary name. On the next page, scroll down to the bottom and select the device registration, and set up the device. Once it's done, download the credentials which we'll use later.

Then go to this link and enable google assistance API.

You can follow google documentation for more detailed information

In the documentation, the python packages are installed in the virtual environment, but later this could be a problem when running the script on the startup.

So, I used the following command

Getting the authorization code

If everything was successful, you will see a response similar to the following:

This will start the google assistant during boot with a stable internet connection.

Since we have modified the pushtotalk.py, google assistant will always be listening and we don't need a trigger word. This is where we turn a bug into a feature. Since the microphone is omnidirectional and the voice is muffled (as well as the recording volume is low) other than the uni-direction the assistant won't get triggered because of the background sounds and voices.

Step 13: Putting Everything Together

It’s time to put everything into the enclosure, First, let’s start with the placement for the power supply and then followed by the raspberry pi zero w and the sound card. Now we can fit the microphone. For the speaker, I’m going to open up the desktop speaker and take the speaker out, and just like we did with the microphone, I will change the audio jack of this speaker as well.

Then solder everything together and stick em up with some hot glue to stay in place. Finally, add some heat inserts and cover the back of Mrs minutes.

There are many changes that can be done.

So, this brings us to the end of the tutorial if you like this article make sure to follow me to read more upcoming projects and also make sure to subscribe to my youtube channel!

Because of some difficulties the video had been delayed, I will upload the video and update here soon stay tuned!