A revolutionary wearable technology that combines the power of sensors, AR and data analysis to ensure that menopause isn`t a pause

A revolutionary wearable technology that combines the power of sensors, AR and data analysis to ensure that menopause isn`t a pause 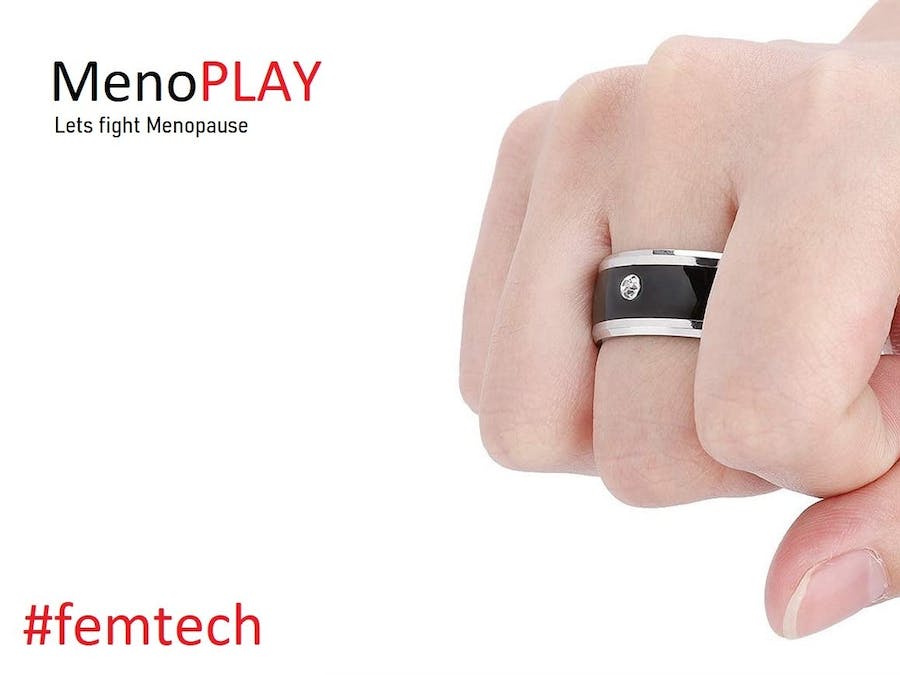 Menopause, also known as the climacteric, is the time in most women's lives when menstrual periods stop permanently, and they are no longer able to bear children. Menopause typically occurs between 45 and 55 years of age. Medical professionals often define menopause as having occurred when a woman has not had any menstrual bleeding for a year. It may also be defined by a natural decline in reproductive hormone production by the ovaries when a woman reaches her 40s or 50s. The whole menopause stages can be divided into four distinct ones as -

Perimenopause is a noticeable phase with so many symptoms and physical changes. Recent studies show that many of the symptoms are undetected as menopausal symptoms and a majority of women are unwilling to disclose their symptoms even to personal physicians and this makes the situation worse.

Some of the symptoms are-

MenoPlay is a revolutionary wearable technology that combines the power of sensors, Augmented Reality(AR) and data analysis to ensure that menopause isn`t a pause. Enough of the chartbuster stuff(I know I am bad at marketing). Let`s get to the point.

- Able to treat many symptoms

Most of the products currently available are-

MenoPLAY tries to overcome all this by targeting many symptoms like hot flashes, osteoporosis, mood swings, incontinence, sexual discomfort, skipped periods and hormonal imbalance. It logs important biophysical parameters to implement augmented reality techniques to deliver valuable, anonymous and timely advice to the user. The user`s progress is monitored and important notifications are issued in pseudo-scientific manner through a connected mobile application and cloud facility.

Such modules would be placed at the extremities of the body in the form of rings to be worn on the fingers and the toes. One module attaches or clips to the inside of the user`s collar and one in the pelvic region. Please hold on!! I will explain the role of each part and the modules` placement. The extremities were specifically chosen as research shows that these are the regions that are most sensitive to temperature changes. From a more mechanical point of view, the movements at the extremities can be used to correctly estimate body posture and movement.

The accelerometer from all the modules would help create an AR model to calculate all movements in a particular time interval. At the end of the day, all the data would be analysed using DL models to estimate the number of calories burnt and the amount of exercise that is required for optimal hormonal balance. The app then recommends the user, the type of exercises based on data collected during the day. For example, if the user travelled a lot during the day the number of leg exercises would be reduced. This is just an example. More can be found in the attachments.

During exercise, again the hand and leg movements would be tracked and compared against physical limits set by an ideal virtual model doing the same exercise telling the user how to correct her movements for optimum benefits from the exercise. This takes augmented reality to the next level. Instead of other health apps that simply keep a count of the number of steps or rely on the user`s integrity to complete a particular exercise perfectly, this is a no-nonsense approach making exercise more effective than ever. Exercise, as research claims heals symptoms in 60-80% of women. It helps reduce osteoporosis, mood swings, skipped periods and hormonal imbalance. Huh!! So all you have done is made a better exercise app, making it more realistic, but why would people pay for it. Believe me, they will!!! Just hang on.

The only problems we have to tackle now are incontinence, sexual discomfort and hot flashes. Most of the solutions in the market target these and they are complicated devices which are really costly. Let's take on them one by one. The module/s in the lower back region would monitor vibrations in the region during periods or during urination. As research proves, during urination muscles at specific locations vibrate at certain frequencies with the flow of urine. An analysis of this pattern can give insights about potential issues in the system. Research also states that Kegel exercises to train the urinary system can dramatically improve incontinence for the better. The app guides the user through the exercises and helps one see one`s progress. Following on the lines of the AR used by the generic exercise application, this too would be monitored with an option to share it with doctors on demand. This can also help alleviate sexual discomfort.

Vibration analytics to the rescue

Just one problem remains - hot flashes and they are probably the hardest to tackle as they require instant cooling solutions and a portable solution is difficult to realise. Current systems are composed of a compact compressed air compartment that can realise minute quantities of air to cool the fingertips and the back of the neck MANUALLY. While this is practical as refills are readily available online, the manufacturing costs and hence the price tag is beyond a majority of the populace. Compound with this the trouble of remembering to refill and carry it in a purse(however small it maybe).

This signal then triggers a cooling mechanism made of a peltier module(TEC) placed on the module that is placed behind the neck where(as research shows) the body is most susceptible to temperature changes, thus sending a positive signal to the brain which then stops the increased blood flow. This cooling sensation negates the effect of the flash and the body deals with it automatically. The time is logged for the user to ascertain what exactly triggers such flashes. Further, the heart rate is also monitored for a regulated cooling mechanism which is spontaneous, AUTOMATIC and energy-efficient.

The final hurdle was the cooling mechanism design. I took a peltier module and affixed a heat sink salvaged from an old Raspberry Pi. I found after lots of experimentation with the placement of the module and power measurements that a fan was not necessary(in fact with the fan on it felt really chilly, not to mention the reduced power draw). The CAD of the design is enclosed herewith.

Symptoms like panic attacks and dizziness can be tackled by including a small push button on any of the ring modules on the fingers. On pressing a signal would be sent to the app which would then send a notification to near ones of the user so that they can take necessary action. In case the user faints or any strange patterns are observed in the heart rate or breathing, immediately the nearest medical facility is informed.

The first five parts in the list I have above are generic and practically all wearables have them and with the advancements in semiconductor technology, it is possible to fit all of this on a PCB the size of a coin(let`s make it flexible). Yet, to convince myself with the concept I did some research and put together a list. I even designed a PCB. You can find it here.

BLE is the way forward

The communication protocol is Bluetooth Low Energy(BLE) to easily connect with a smartphone and to increase the battery life of the module. The accelerometer is a high-precision and high sample rate 9DOF one and includes a temperature sensor. For heart rate generic oximeter module is used.

I had two Makerdiary NRF52832 boards from a previous project lying around. I purchased an oximeter. The acelerometers were readilly available at a local store. I used the MPU9250 with temperature sensor. With one set, I made necessary connections on the I2C line of the NRF master, connecting the oximeter and the MPU9250. I soldered everything directly for a small form factor and reliable connections. I hot glued them on top of an old ring I sourced from my mother`s discarded collection(Don`t tell her). For power source, I used a 3.7V/1100mAh Li-ion battery.

I put the example BLE sketch in the NRF SDK on the board, added the I2C sensors as inputs and broadcasted the data. On the NRF Connect app on my laptop and analysed the plots. After I was convinced with the results, I took two minuscule pieces of Al foil and placed them at the two inside ends of a ring, to measure resistance. Since I did not have sample data this took me about an hour, to ascertain abnormal limits. I also discovered a way to trigger an alarm by analysing the heart rate data, thanks to the NRF Connect app. The trick here lies in detecting an 18-20 beats per minute rise in heart rate from normal. I simulated this by skipping in the process of which the hot glue came off and the solder too. My Bad. I soon did over the mess and started with the cooler module for the neck.

I salvaged a RasPi heat sink, a fan for the same and a peltier module. I connected the other NRF module, attached the battery, the accelerometer and put everything in a plastic cards box with the peltier module facing the skin. FIrst, I tried with the fan. The cooling was good but the power consumption very high. I tried with the heat sink and the results were good enough. The accelerometer data received was also good enough.

I started off on Android Studio but soon dropped the idea and instead made a web-application on Node-Red. As inputs, I took the accelerometer data and the readings from the other sensors. By integrating the accelerometer data I was able to create a 3D render of movements. I was about to order more accelerometers to test the AR functions and add the aforesaid features when the pandemic started and I could not test it further. The code you will find in the Repo with respect to the exercise monitoring is untested. Everything else is tested and works fine.

On a final note, I would say that the impact such a product can have in the lives of menopausal women all over the world is enormous. The cost-effective design makes it suitable for consumers in the underprivileged sections of the society. Further changes to the design include addition of a display for time and weather so that the device can double up as a smart watch. The total cost of the complete package if mass-produced and including a 10% profit margin,would still be below 50$!!! I say this on the basis of this BOM:

The BOM contains all chips I plan to use in the product. I am extremely sorry for not being able to come up with a final prototype. The lockdown has terribly marred my plans. I hope the community would appreciate my efforts and stay tuned for updates when I am finally able to start prototyping.