Experimental studies would assert the possibility that PM10 may act as a “carrier” for the spreading of the viral infection of COVID-19.

Experimental studies would assert the possibility that PM10 may act as a “carrier” for the spreading of the viral infection of COVID-19. 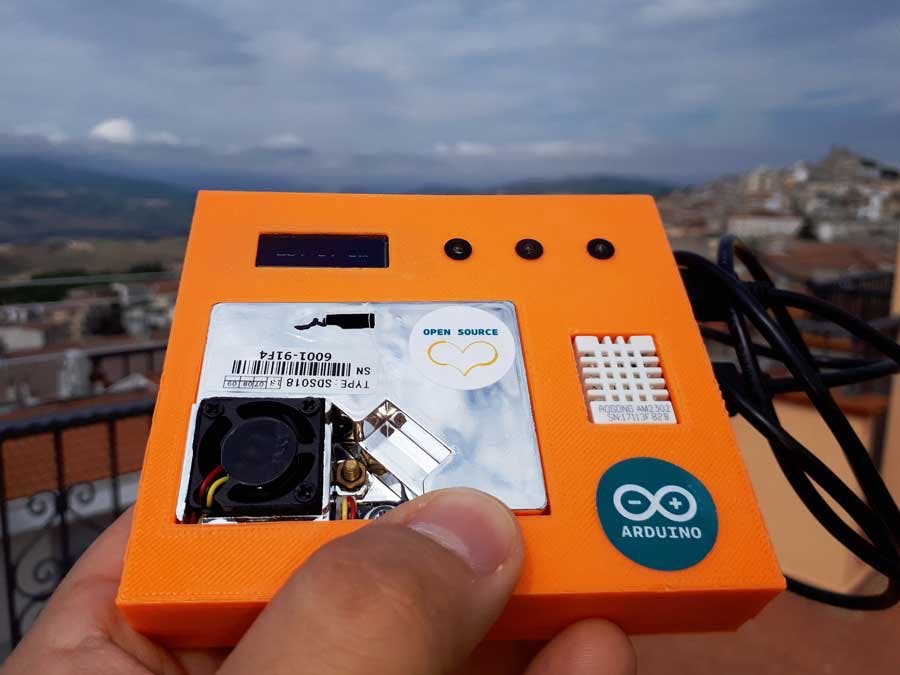 Experimental studies would assert the possibility that particulate matter may act as a “carrier” for the spreading of the viral infection of COVID-19.

This means that the virus could be carried over longer distances by fine particles suspended in the air and could remain viable for hours, days or even weeks in tiny particles. So, air pollution particles could help coronavirus travel further in the air, increasing the number of people infected.

Scientists and reserchers suggest that higher levels of particle pollution could explain higher rates of infection in parts of Northern Italy.

A few weeks ago I watched an Italian TV programme called “Report”. It is an investigative programme broadcast on channel three (RAI 3) by the Italian television.

An interesting piece caught my attention…It was about pollution and in particular about a type of pollution caused by intensive animal farming. (Click here to see the corresponding part: from minute 27:25 to minute 56:00).

Intensive livestock refers to a system of farming in which large numbers of animals (such as cows, pigs, turkeys or chickens) are kept together into relatively small spaces. The aim is to produce large quantities of meat, eggs, or milk at the lowest possible cost. They are also known as “factory farms”.

When the cesspools reach their capacity, farmers spray the untreated manure onto surrounding fields as fertilizer, and that bring still more of these harmful substances into air.

Untreated waste pollutes the air with odors (the stench can be unbearable) and creates health problems, markedly decreasing the quality of life of workers, people nearby and neighboring communities and property values. Studies have shown that people who live near intensive livestock farms have a much greater risk of developing respiratory problems, such as asthma and chronic bronchitis.

It should be noted that, in Lombardy 85% of ammonia dispersed in the atmosphere is produced by manure: it would seem that farms pollute in the same way as cars.

A study carried out by researchers from several Italian universities and published last March with the title “Evaluation of the potential relationship between Particulate Matter (PM) pollution and COVID-19 infection spread in Italy” (at the following link it is possible to download the Position Paper: https://www.simaonlus.it/?page_id=694 , direct link to the english pdf http://www.simaonlus.it/wpsima/wp-content/uploads/2020/03/COVID_19_position-paper_ENG.pdf - I recommend reading it!) speaks about a possible correlation between particulate matter concentration levels and the number of persons infected by COVID-19 (as you can see in the following diagram).

Researchers have collected and analyzed the following data:

and have noticed a significant relationship between the daily PM10 exceedances and the spreading of the COVID-19 infection during the time-lapse of the study (10th-29th February 2020), with a high concentration of Coronavirus cases in Northern Italy, in particular in the Po Valley and especially in Lombardy, while in Southern Italy the diffusion and lethality of the virus was significantly lower if compared with that observed in Northern regions.

In this position paper it is possible to read “The hypothesis of a direct relationship between COVID-19 cases and PM10 levels is strengthened by the evidence that concentration of COVID-19 outbreaks notified in Po Valley [in Northern Italy] was higher than in other parts of Italy” (as you can see in the following figure, that shows the exceedances of PM10 pollution limits registered in Italy in the period 10th February - 29th February and where it is possible to note that the Po Valley is the most polluted area in Italy).

It is very remarkable that most of the Coronavirus cases in Italy are located in Lombardy, where the concentration of intensive livestock farms is very high and the consequently production of particulate matter is enormous.

It should be noted that this phenomenon continued even during the lockdown, when factories were completely closed and cars didn’t circulate.

According to this study, in the Southern regions of Italy (less polluted) the prevalent pattern of viral transmission would be occurred by contact between people (in agreement with epidemic models based on the typical transmission mode ‘person-to-person contact’), whereas in the regions of Northern Italy (more polluted), the infection would be spread in a different way, that’s to say by a carrier agent (represented by the particulate matter suspended into the atmosphere).

On the basis of the collected data and observed relationships, researchers conclude by saying that it is reasonable to assume that, during the period 10th-29th February 2020, high PM10 concentration levels registered in specific Northern Italian regions had a carrier and boost effect to the virulent spread of the COVID-19 epidemic, promoting the diffusion the COVID-19 among the exposed population, phenomenon not observed in other Italian regions that were affected by the contamination during the same period.

Other studies have shown that PM would act as a carrier for viruses. Viruses, in fact, may attach themselves to particulate matter, whose small particles can travel long distances on air currents and remain in the atmosphere for hours, days or even weeks.

Particulate matter also would represent a substrate allowing viruses to remain active into the atmosphere for some time (hours or days). Environmental factors play an important role in activation and persistence of viruses in the atmosphere:

Another research from Yale University has shown how low humidity conditions allow infected particles to spread better and survive longer (click here to see the article).

On the basis of these considerations, I have thought of creating a replicable, low cost and easy to use device able to measure PM10 concentration levels, temperature and relative humidity (environmental factors involved in viral infection spread), in order to warn people when these values are too high and potentially dangerous for their health, so they can choose to stay home and don’t go out or, if they are outside, to go home, or wear a mask, even if distances between people are much greater than one meter.

The device consists of a PM10 sensor, a temperature and relative humidity sensor, a display and three LEDs, all controlled by an Arduino Nano. The sensor data are shown on the display and the LEDs indicate what the air situation is.

I have identified four different situations:

Electrical schematic
1 / 3 • View from above of the device

The SDS018 can get the particle concentration between 0.3 to 10μm in the air, by using principle of laser scattering. It is stable and reliable with its digital output and built-in fan.

DHT22 is a digital temperature and relative humidity sensor. The main features are:

I have installed the DHT sensor library by Adafruit - Version 1.3.10

I have installed Adafruit SSD1306 library by Adafruit - Version 2.2.1

I have used three 3mm LEDs: red, green and yellow.

To read the serial output of the SDS018 I have modified Arduino Nano.

I have removed the SMD resistor indicated in the following figure with the red arrow.

The Arduino Nano can be powered in two different ways:

I have powered the board via USB through a power bank.

I have designed and printed in 3D an orange PLA case in order to fix the sensors, the display, LEDs and Arduino Nano. The case consists of two parts: the lower part, where are fixed the Arduino Nano and the SDS018; and the upper part where are fixed the DHT22, the display and the LEDs. In the lower part there is an opening for the Mini-B USB cable. On the upper part there are three holes from which the three LEDs come out. If you want, you can use the LED Mounting Hardware for fixing the LEDs (just enlarging the holes up to 5mm).

Here attached you will find the two files that you need to print in 3D the two parts of the case.

I have used hot glue to fix the Arduino Nano, the display, and the DHT22 in the case.

Figure 1 - I have soldered LEDs with their resistors and I have mounted them on the upper part of the case;

Figure 2 - I have inserted a heat-shrink tubing on each resistor and on each wire;

Figures 3/4 - I have fixed the DHT22 sensor module with hot glue;

Figure 5 - I have fixed the display module with hot glue;

Figure 6 - I have soldered all the wires to the Arduino Nano board;

Figure 7 - I have fixed the Arduino Nano board with hot glue;

Figure 9 - I have fixed the red and black wires with the glitter hot glue (I had finished the transparent one :) )

Figure 10 - I have soldered the three female jumpers on each wire in order to connect the SDS018 Sensor module;

Figure 12 - I have mounted the SDS018 sensor module in the lower part of the case with a machine screw M3x6;

Figure 13 - I have closed the case with four machine screws M3x16.

The firmware is an Arduino sketch. In the following figure you can see the simplified flow chart.

At start-up is executed the peripheral setup and the LEDs are checked.

At the end of the loop I have inserted a 2 second-delay.

If you have any questions or suggestions don't hesitate to leave a comment below. Thank you! 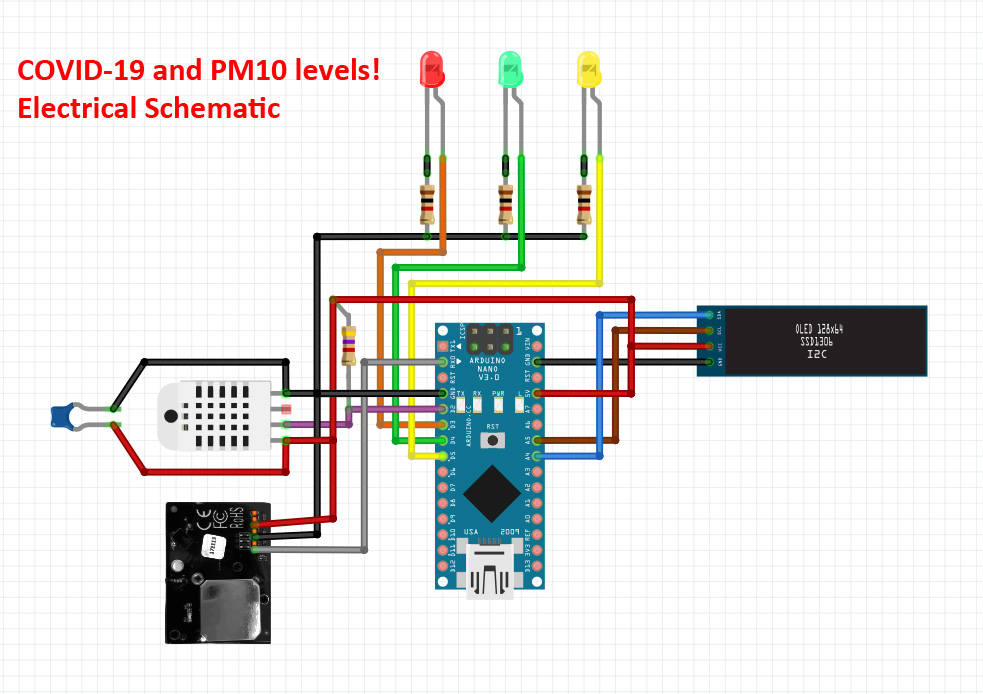 4 projects • 9 followers
I have a Bachelor's Degree in Industrial Engineering - Electronics. I am an expert in hardware design, I can program in C/C++,Python and ROS
ContactContact