Make a dummy load for a lower voltage DC power supply. Very good if to test a power supply you got or if you are trying to make one.

Make a dummy load for a lower voltage DC power supply. Very good if to test a power supply you got or if you are trying to make one. 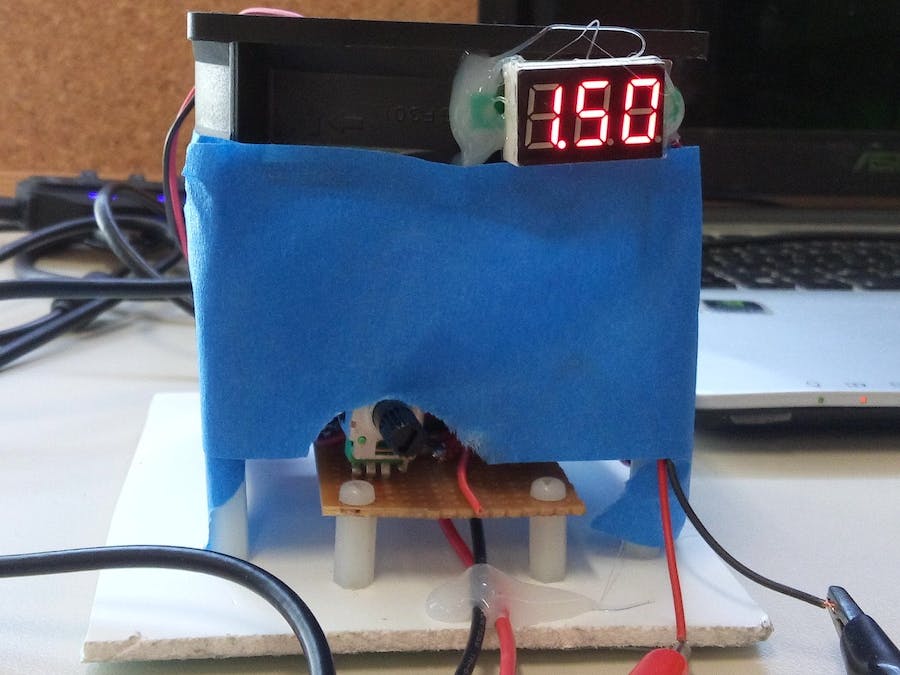 Hi to anyone reading this project. First I would like to explain why I made this.

I have had the need for a bench power supply for my projects. I made one using one of those buck-boost modules from ebay which works okay for the most part (maybe one day I will post that here) but I want to make a better one, with more features and to learn more. I have an interest for electronics and power supplies so it seems a good way to learn.

Well when I started to make a buck regulator I had a problem. How do I test it for various loads? Well I could use a resistor but I didn't have many power resistors and when you start testing higher voltages and currents the resistors get really big! So instead I decided to make this project.

I will try to detail my choices so that you can make one and don't have the same components or you want to improve it.

For anyone reading this and looking to make a tester the build here has this specs:

schematic for the dummy load

Notes: For Rs I used 5 1ohm, 1/2W resistors since I didn't have anything better. It should give about 0.2-0.3ohm, they we're exactly precise, the resistance must even change quite a bit with temperature.

If they we're perfectly equal (they aren't) this means I made a 0.2ohm 2.5W resistor. sqrt(2.5/0.2) = 3.54A would be the limit current in theory but remember that one resistor might be more stressed than the others because it has more resistance (R*I^2 for constant current, so the bigger the R, the worse for the poor resistor).

Given that I wanted this to give up to 3A, that means that Vs can be up to 0.2*3= 0.6V. Knowing that I needed to limit also the Vref to 0.6V and that was done by adding R1. Given that the voltage input into R1+R2 is always 2.5V due to the voltage reference, the voltage divider max division is 0.6/2.5 and the requirements for max output is when the resistance between pin5 and GND is 10k

Well the idea is to dissipate power as heat, so it didn't really matter if I used a really low resistance MOSFET. I had plenty of TIP120 at hand + they are cheaper than most power MOSFETs.

Not only that but it has a maximum Vbe of 2.5V. This is actually good (well as MOSFET would have a similar or higher voltage in the Vgs) because the op-amp is not rail to rail, but the voltage output on the op-amp doesn't need to be too low to lower the current in Vce.

Note that the TIP120 has a absolute max Vce of 60V and max continuous current of 5A.

Another note on the TIP120, the max power dissipation is 65W when the collector temperature is 25ºC - 40W if it's 75ºC. This means that if you are testing a high voltage source, you can't test a high current or the BJT will break (I've seen it happen twice when testing, before I figured that was the problem). Ex: if you test a 40V power supply, don't go over 1A. But if you test a 12V one, you can go to the 3A limit of the circuit.

Also, the heatsink is important. I added a fan to help out but without proper heatsink you won't do much since this is basically a heater. The heatsink you see in the pictures are two put together, each with a thermal resistance of 6.8ºC/W. I used thermal paste/glue between the transistor and the heatsink and to join the twon heatsinks, hopefully getting 3.4ºC/W. Even so 20V*3A=60W => would mean an increase of 204ºC above ambient temperature! 150ºC total temperature is the absolute max, so assuming a max rise of 100ºC => 100/3.4 = 30W, so at 3A you can only give it 10V. Even if you get a better heatsink (or even if the fan helps a lot) the TIP120 should only be able to reach 2ºC/W so you could get a max of 50W dissipated - 16V at 3A (this all assuming 100ºC rise is the safe maximum, if ambient temperature is lower you can use more power).

The ammeter have an idea of current being draw and not all power supplies have an ammeter. Since the LM358 has an extra op-amp and it wasn't being used it was easy. Note that these are really just to give an idea, the math isn't precise and the voltmeter is ebay grade.

Rs is about 0.2-0.3, didn't really measure it with precision. So to use a voltmeter to give the current I need a gain of 5. This is set with R4 and R5 - the IC1A is a non-inverting amplifier. Remember, the gain of a non-inverting amplifier is 1+(R5/R4). So with R4 = 1K, R5 should be 4K - I choose 3.9K since it was the closest I had. Ideally you would not even measure Rs - just use a POT instead of R4 and R5 (or just R5 depending on how you do it), use a good ammeter to measure the current and calibrate the DIY ammeter by adjusting the POT.

The voltmeter I used is a cheap one from ebay, with just 2 wires - v20d-2p-1.1. You power it from what you want to measure. Besides that being a bad idea if you want precision, that means the minumum voltage measured is about 3.3V. Bellow that the display start dimming - get low enough and it just turns off. This even though the device is perfectly capable of measuring near the 0V.

If you have the 3 wire one, great! If not here is how you hack it.

You're gonna have to cut a trace and solder two wires. After doing that you will not use the original red power wire again, just the original GND and the 2 new wires. The camera is not that good at focusing tiny things up close but I hope you can see.

Then it's time to assemble everything. I only remembered to do this tutorial after I made the whole thing so step by step pictures :(

Nevertheless I will try to explain and give pictures on how to make it. (Well I kinda just tried to put everything together and decided how as it went, so no big plan in the board design or assembly). For this part you will need the tools.

The big chunky wires are for the power supply being tested. The thinner red and black wires coming down are to connect the logic power supply.

The collector, emitter and the ground near the Rs use 2 tracks since there can be a lot of current running there (represented here by those black wires).

Any question you have just post a comment and I will try to explain. I will see if I can make a better drawing in the future.

ToputalltogetherI used some nylon spacers I had laying around. The board sits on top of short ones while the fan is on top of long ones. The base was a small PVC board I had laying around. The voltmeter I hot glued to the side of the fan. And to end it off, I added some tape to cover the front and sides. Why? I mounted the fan so that it pulls air from the heat sink - covering the sides and front made sure that most air went through the heat-sink.

I decided to test a power supply we have in the Lab. Somehow someone broke the 5V output (it doesn't give anything) and there was suspicion one of the variable outputs was broken too, the voltage meter needle wobbled a lot at the time.