Weather forecast clock made from a Nano, a salvaged alarm, a BME280 sensor, a DS1307 RTC, an old cell phone battery, and Nokia 5110 screen.

Weather forecast clock made from a Nano, a salvaged alarm, a BME280 sensor, a DS1307 RTC, an old cell phone battery, and Nokia 5110 screen. 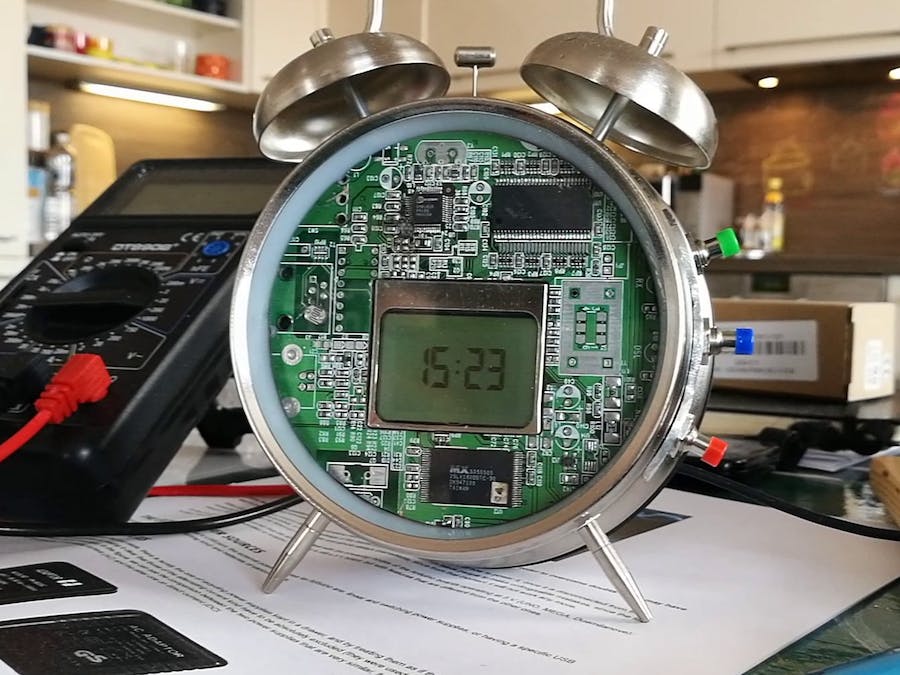 I had a broken alarm clock lying around and came up with an idea to convert it to clock and weather forecasting station.

For this project, you will need:

Since the new clock will be fully digital with a mini-computer inside, I added 3 simple nice-looking buttons on the side.

Using a scrap piece of aluminium I cut out overlay to create a label. The letters for the labels were created by using the letter-punches and a black marker.

Step 3: Capacitor for the Motor

I will keep the old bells to power the alarm with the motor. The old broken clock mechanism had a ceramic capacitor with the label 104. I removed it from the circuit board and soldered it directly to the motor - this will help prevent power spikes when turning on the motor during alarm. Also important to note is that motor will be controlled through transistor but more on this later.

Step 4: New Face for the Clock

Since I decided to make a new face for the clock - I took a circuit board from my dumpster pile and used a builder heatgun to quickly remove all components. The hole in the middle is made for the digital screen of the new clock.

For this project I decided to use an LCD screen from old Nokia 5110 mobile phone. These screens are widely available for sale as a module, they draw very little power and there are good libraries for the Arduino. If you are buying a new module with 5110 screen - you're saving the planet because all new modules are created from salvaged 5110, 3110 and 3210 phones!

You might have already guessed that I was planning to use Arduino board to control this clock. The project is easily repeatable even for beginner Arduino fans because I did not create my own circuit boards. It is an Arduino Nano board with modules connected to it - BME280 temperature, pressure and humidity sensor, DS1307 RTC clock, TP4056 Lithium battery charger, small 3.7v to 5v booster module, Light Dependent Resistor (LDR - light meter) and a buzzer (taken from the old PC).

Have a look also at the sketches - they show all connections. I think everything is very easy to read and understand but if you have any questions just ask in the comments below.

Few notes about the setup:

Step 7: Junction Board for Easy Connections

All of the modules require positive and ground connections so I decided to use 2x8cm prototype board and soldered 5V and Ground rails to it. I also made a small I2C rail there too since I had several modules using I2C interface.

On the other side I soldered standard pins so that I could connect and disconnect the modules when required.

Some of the additional components were also soldered there such as transistor and resistor for motor control and a resistor for Menu button which uses Interrupt. I showed the schematics in the previous section.

Step 8: Setting Up the Power

I used an old Lithium-ion battery from my cellphone to power this clock. Usually the mobile phone batteries that are replaced still have good capacity in them (at least half of what it was when new). Their advantage is that they have an in-built discharge protection circuit and they are also very thin so can be used in small space scenarios.

To connect the battery you simply solder the wires to + and - pins on the battery. Don't worry, you won't damage the cell because there is a controller and some empty space between pins and the chemicals of the cell.

On this picture you can see the battery and also the TP4056 charge controller as well as 5V booster connected together and to battery. I used some shrink-wrap tubing to make everything isolated and compact.

Once I had soldered everything, I glued the buzzer and temp/pressure/humidity sensor on the back panel. They all fitted nicely in the existing slots from old clock dial controls.

It was now time to install the Micro USB port on the back. Why Micro USB if Nano uses Mini USB? Simply because in household, most USB cables are from cellphones and it would be convenient if the clock was able to take that too.

Since I wanted to use it for both charging and updating the clock and weather station functions - I stripped the USB cable, routed the power wires through TP4056 charger and Data+/Data- wires directly to the USB socket of Arduino Nano. You can see this on the schematic I attached.

It was now time to pack everything back into the original clock. I used shrink tube to isolate components and modules. Even the Arduino was wrapped in shrink tube.

As you can see, the clock is fully packed inside. This allowed to create something more sophisticated than the old clock I had - given that there are some programming skills of course. I wrote the initial code but asked my friend to step in and help me out.

So far, besides the clock itself, these are the functions that this project is already supporting:

The code is going to be updated in the future with new features so be sure to check back for firmware updates :-)

If you are new to Arduino world, these are the steps I would recommend doing:

Forecasting algorithm is the following:

Arduino Nano gets new data from BME280 sensor every 12 minutes. The measurement cycle is 3 hours. After 3 hours the range of pressure monitoring (max and min value during 3 hours) shifts relative to average values during the current range and current pressure value. Every hour the direction of pressure change with current pressure value are saved. kPa units are used for forecast calculation.

Due to memory limitations of Nano the forecasting algorithm had to be simplified. But despite simplifications, it is able to forecast precipitation in next 12-24 hours even though the forecasting is now more pessimistic - the default value is "Cloudy Weather".

"Sunny Weather" - current value of pressure is higher than norm by 7 points, pressure is not falling and difference between min and max values during the last 3 hours is not more than 2 points.

To improve the quality of forecasting it is recommended to change your "altitude" in the main code file. You can get your altitude for example here: https://www.daftlogic.com/sandbox-google-maps-find-altitude.htm

If it was difficult to follow what I did above, here is also a video version with all the steps shown.

Overall, from my point of view, the difficulty level of this project is not high and anyone could make it.If you don't have an old clock, you can find one cheap at a local flea-market.

All the components are low price and are available on SparkFun/Aliexpress/eBay/Amazon.

I hope this tutorial was interesting to you! 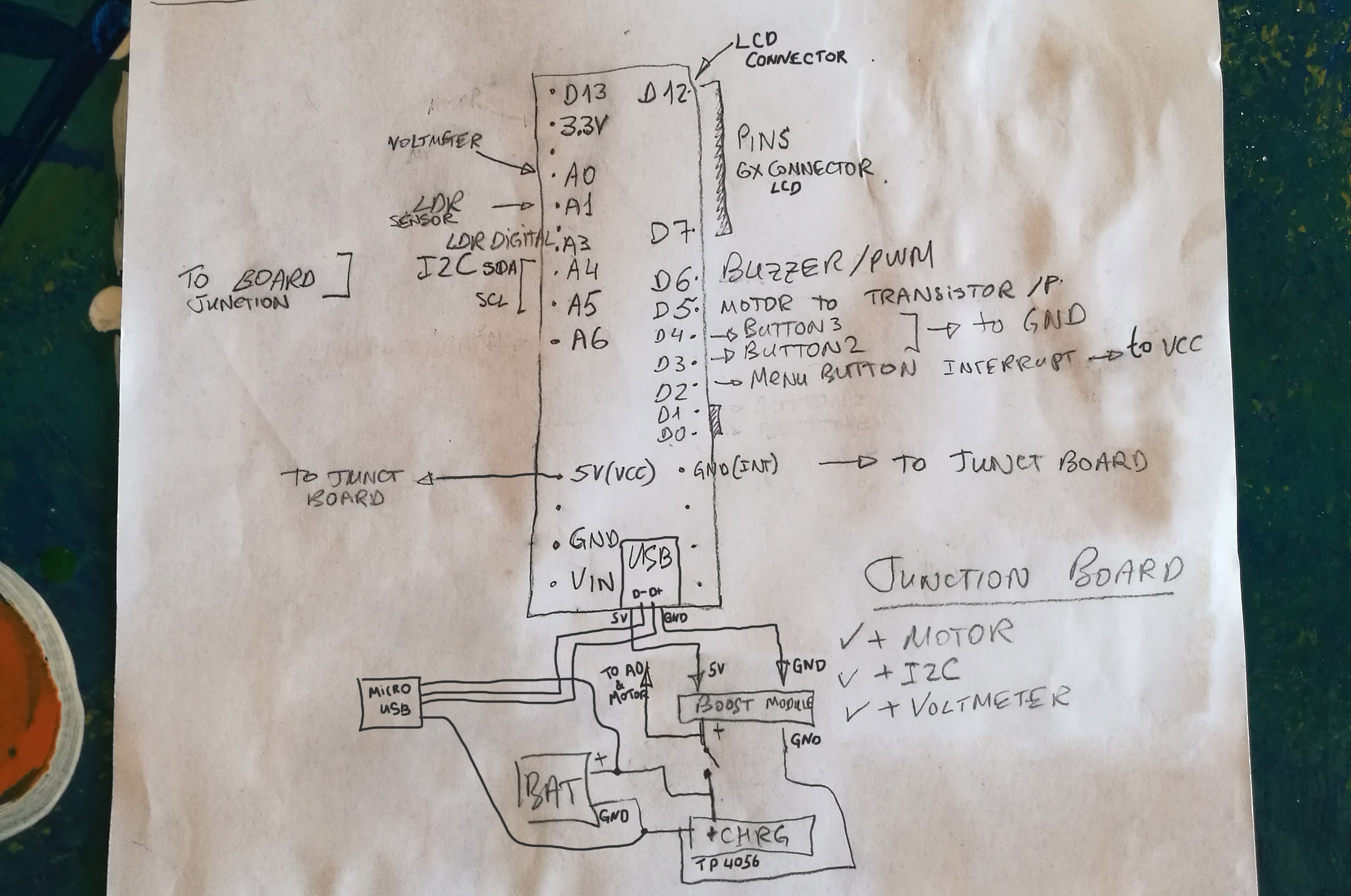