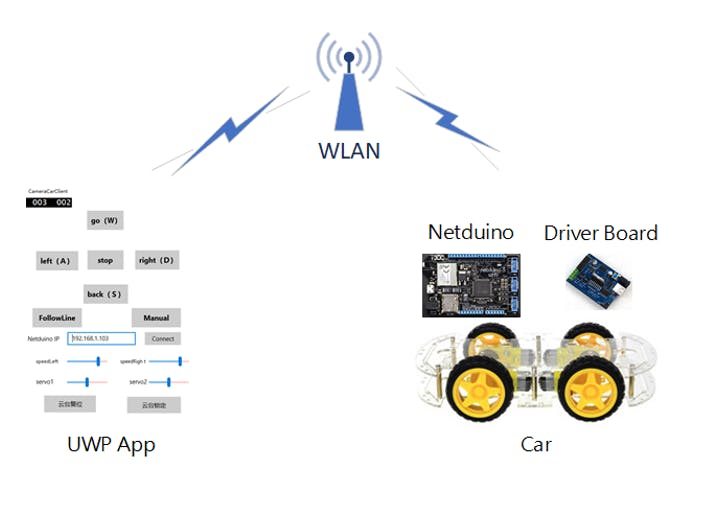 Netduino is an impressive hardware platform that runs applications built with.NET MicroFramework, which is quite easy for C# and.NET enthusiasts to build IoT things.

The demo video is uploaded to YouTube as follows.

Step 1: Connect the Netduino 3 WiFi to the Car

Power the Arduino, get the board connected to the PC, open Arduino IDE on PC. Open the ArduinoCar.ino (you can find it here: https://github.com/shijiong/UWP-Controlled-Wireless-Netduino-Car ). Choose Arduino/Genuino Uno and the right COM port, Click upload button to program the Arduino board.

In this section, we will install Visual Studio 2015 (Community edition is enough), NETMF SDK, and Netduino SDK. Please refer to this official docs here: http://developer.wildernesslabs.co/Netduino/Getting_Started/

In this section, we shall update the firmware of Netduino 3 WiFi to the latest, as well as config the network for the on-board CC3100 Chipset.

For the first part, we can refer to this doc: http://developer.wildernesslabs.co/Netduino/About/Updating_Firmware/

For the second part, we can refer to this doc: http://developer.wildernesslabs.co/Netduino/Input_Output/Network/

For my project, I config it as follows. I use WPAPSK encryption, and the password is located in Pass phrase, the SSID is also set properly.

As soon as we set the network, the Netduino 3 WiFi board should be unplug and replug to the PC. Then, we can use visual studio 2015 to open the project Netduino Car Server (you can find it here: https://github.com/shijiong/UWP-Controlled-Wireless-Netduino-Car/tree/master/NetduinoCarServer). Click on the Properties item in the Solution Explorer, select.NET Micro Framework on the left, and the under Deployment choose USB, and in the Device drop down, choose your Netduino device as shown in figure 4.

After downloading the program, you will find the IP address that Netduino 3 WiFi gets via DHCP service, which will be shown in Output Window as follows.

Figure 5 IP address of the device

In this section, we will debug Netduino Car Client UWP application on Windows 10 device, including PC, Mobile or Windows 10 IoT Core device(Raspberry Pi, Dragon Board, Minnow Board MAX). The sample project is build under Windows 10 Build 10240. So, if you want to switch the target to different Build, you can change this setting in project properties page as follows.

If you want to deploy this app to the local PC, choose local machine, and click debug button as follows.

Alternatively, we can deploy the UWP App to Windows 10 IoT Core devices, such as Raspberry Pi, Dragon Board, or Minnow Board MAX. For Raspberry Pi, we should choose ARM instead of x86 or x64, set the IP address of the Raspberry Pi, then click Debug button to trig download the app as follows.

Please connect touch display (or display and mouse/keyboard) to your IoT Device in order to input strings and click buttons on the UI.

As soon as the UWP application starts up, you will find the UI is shown as follows.

Figure 9 UI of the UWP App

Here we input the IP address of the Netduino 3 WiFi, which is shown in the step 5, click connect button to establish socket communication between the UWP app and the Netduino. Please note that we use 8080 port for socket communication. After connection, we can click go, back, left, right, stop, followLine, and Manual button (or you can use WSAD keys on keyboard) to control the car. Please remember that the Windows 10 Device and the Netduino should be connected to the same local network.

In this tutorial, we have walked through the hardware and software that we need to make a UWP controlled wireless Netduino car.

Add speed and servo control to the project in the near future. 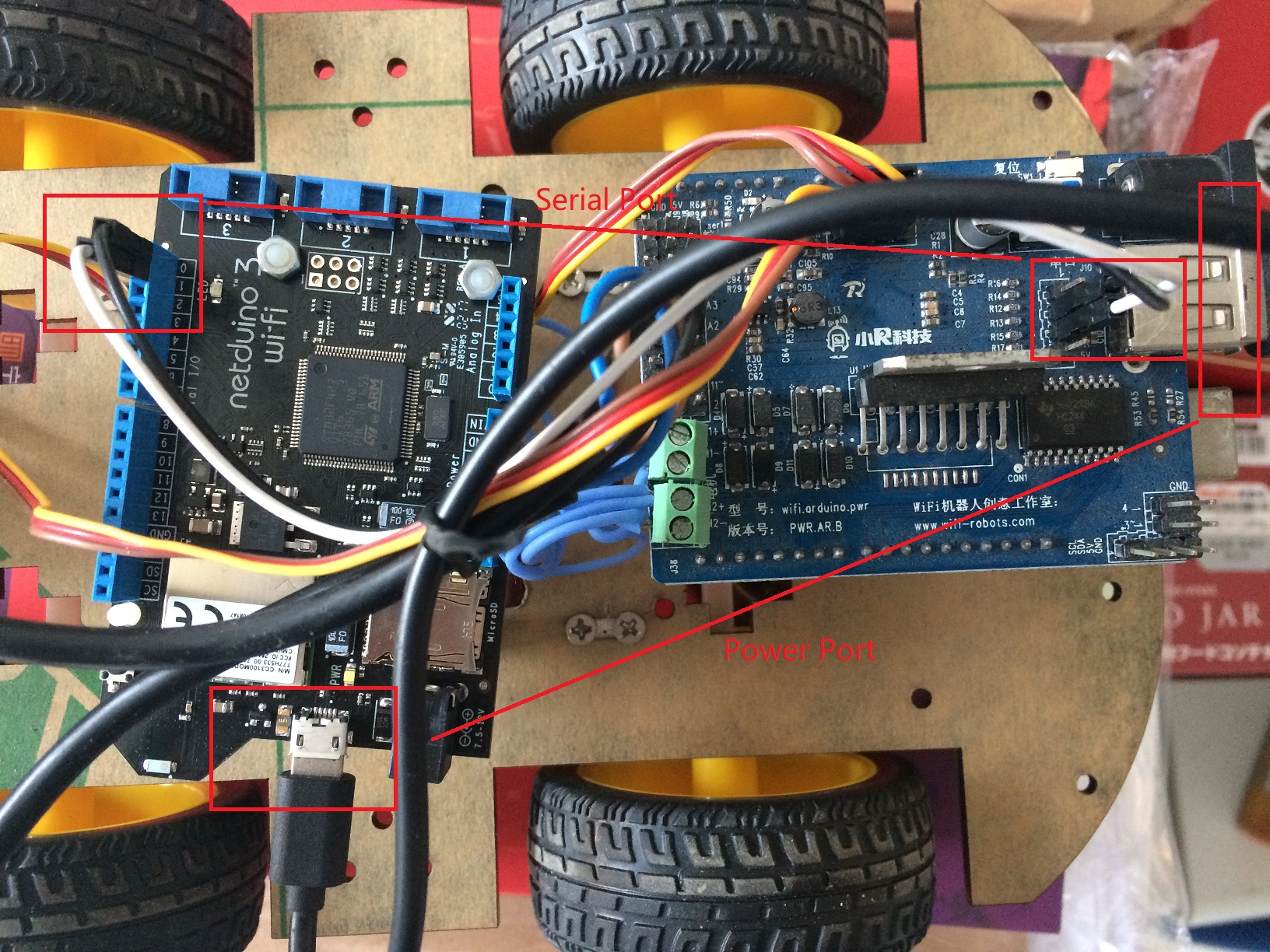