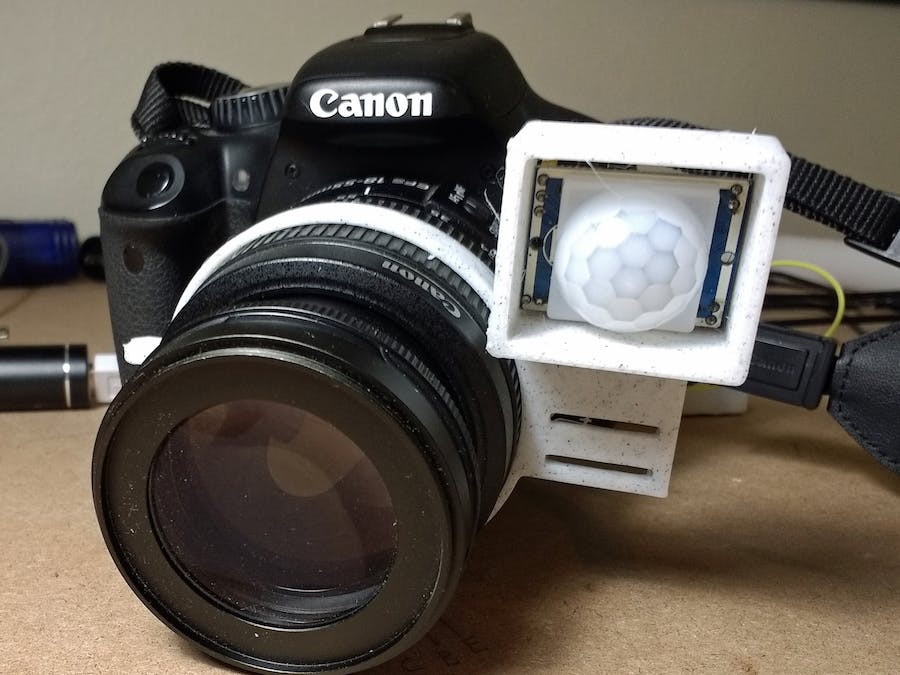 If you have a Canon DSLR (may work with others—I've tested it with a T2i) that you'd like to set up to observe nature and other phenomena that moves, this device will help you do just that. It uses a passive infrared (PIR) sensor—described here among other microcontroller sensing options—to detect motion, then an opto-isolator to connect the ground and trigger pins. No other active components are needed!

3D Print the frame based on files found here. The base is made to wrap around a stock 18-55mm lens that comes with many T2i camera kits. Also included is an extension shroud that fastens to the basic frame if so desired. This covers more of the sensor, making the subject come closer to the center of the lens before triggering.

Assemble as shown above. The frame is designed to accommodate a standard PIR breakout, and allows three wires with female headers to plug in through the slot on the bottom. Wire these to power ground and signal as shown below. Wire this in turn to an opto-isololator, adding a resistor in the 100 ohm range to keep from burning the component out. Finally, wire the output of the opto-isolator to a 2.5mm stereo plug. In my case, the necessary wires were blue and gold, but check to make sure they connect to the base and tip of the plug.

Hot glue the opto-isolator in place as shown, as well as the PIR sensor itself (you'll likely want to install the lens first). Lash the stereo cable to this section with a zip-tie, providing strain relief. Finally, lash the double-CR2032 battery pack (this style was used) down with a zip-tie as shown.

You might note that there is a hole on the opposite side of the frame's circle from the sensor unit. This is designed to be tapped on one end for a 10-24 bolt to secure down to the camera. This proved to be unnecessary during light testing, but you may want to tap this hole and tighten it down if movement becomes an issue.

Because there is not trigger for the middle auto-focus pin, you'll need to focus the camera at the point where the action will happen, then turn off the auto-focus on your lens. Plug the 2.5mm stereo jack into the shutter release jack on your DSLR and turn on the trigger assembly's battery pack. You can place your hand in front of the camera to test it out, then set it up to observe whatever phenomena you have in mind.

Triggering works as shown in the short clip below, also seen in the build video at the beginning.

As described here, this sensing method gives you only limited control over triggering, and must wait at least a few seconds between shots. For even more control, you could implement a small microcontroller board, such as an Arduino Nano, or even a Wemos D1 mini to allow control over a local network.

There is also custom firmware by Magic Lantern that can supposedly implement motion-triggering functionality, as well as many other photographic tricks. I haven't tried this software myself, but certainly something to consider before going through this process.