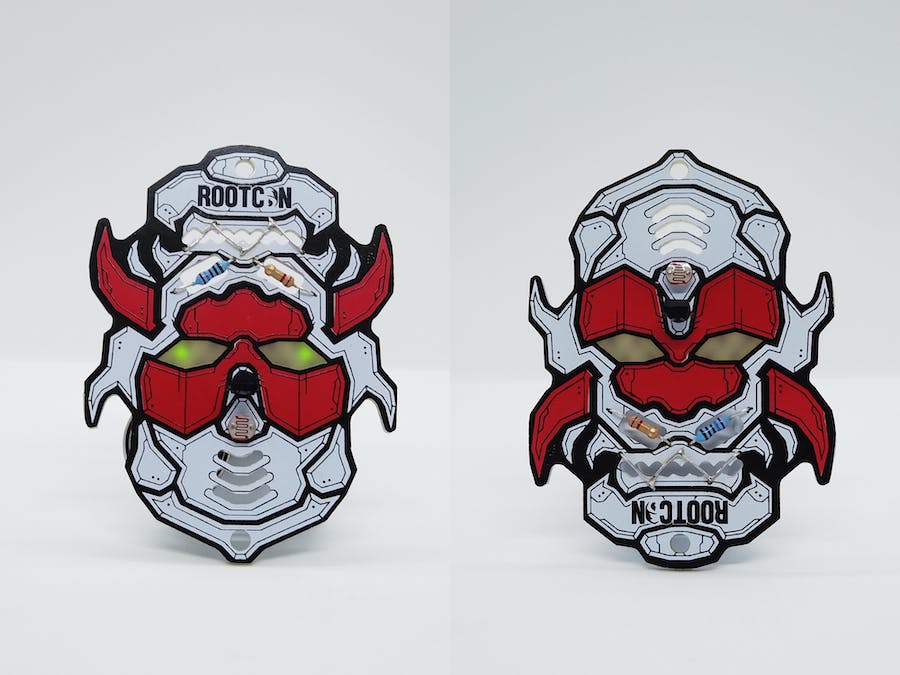 I was asked by Dax to come up with a badge for their annual hacker conference ROOTCON's 16th edition. I had previously hosted a hardware village and received a phenomenal response from the friendly Philippines community.

This year's theme is the novel Hard Wired by Len Vlahos, which is a contemporary sci-fi story about a boy who might not be human. The direction was clear - the dualistic situation between the light and dark. With that thought in mind, I ventured to incorporate both sides in the same design. And after what felt like an eternity of time in revising the design, we arrived at this...

The design elements blending in to form the light side and dark side then upside down.

Bring it to the PCB design took some clever modifications and plenty of detailing.

Getting the design printed on the PCB took some more experimentation to get the pattern right.

Dax wanted the badge colour coded for different conference attendees. So red would naturally be for the crew, green for the speakers and blue for the attendees.

All components are soldered on the rear side of the badge due to the PCB being a single-sided board.

I wanted the components to be functionally part of the design and not just aesthetics so the resistor and wire bridge elements became an actual integral part of the circuit.

The badge came with a Glow In The Dark circuit based on a light-dependent resistor or photoresistor coupled with a transistor that allows the current to flow through to glow red LEDs if there's no light incident on the sensor. In the rest of the cases of light incidents on it, it glows the default green LEDs.

Taking the badge in darkness will make the transition into the red LEDs.