Outside Thermometer with Trend, Max and Min Temperature

Outside Thermometer with Trend, Max and Min Temperature 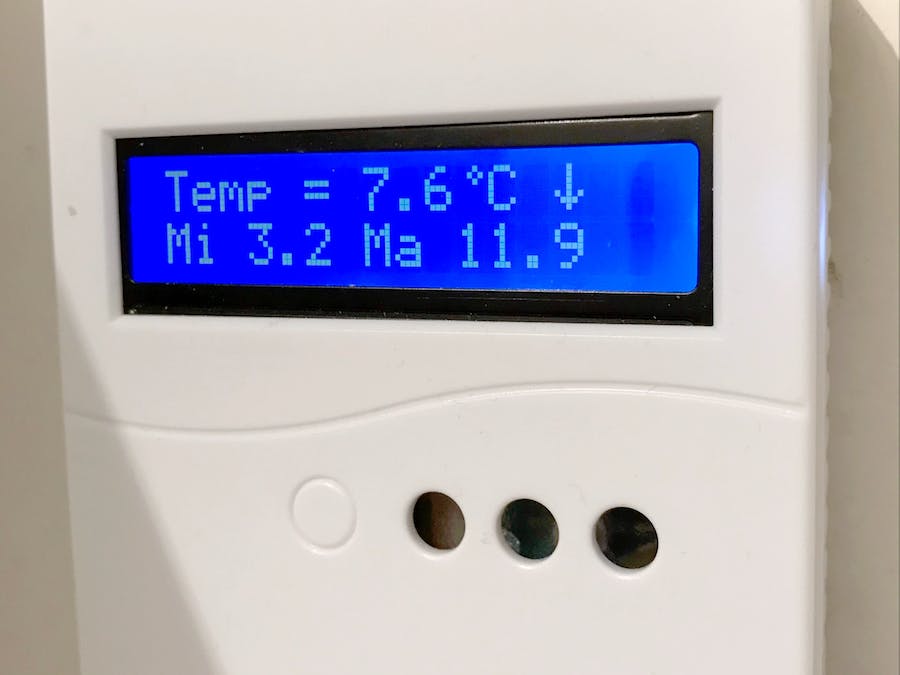 I made this thermometer for fun, but also to get some experience with writing Arduino software and with the use of an LCD display. While working on it I decided to add some functionality. Measured maximum temperature, minimum temperature and an arrow up or down on the display showing the temperature trend. A push button is used to reset the displayed min and max temperature to the current temperature.

How to build it

Building it is fairly simple. Connect the components as shown in the schedule. The 5V output of the Arduino Uno must be linked to all the +5V connections (arrows.) Also interconnect all ground pins. The thermometer is powered by an external power supply of 12 V DC connected to the Arduino. Download the sketch and upload it to your Arduino and you're done.

The sensor, a high precision NTC

The NTC I use is a precision temperature sensor of B+B Thermo Technik of 10 kΩ. This sensor has a resistance tolerance at 25 °C of ±0,5% The NTC temperature sensors of series TS-NTC have a wide measuring range of -60 ... +150 °C, and hence, are suitable for applications where till now expensive platinum resistors were being used. Both the basic resistance as well as the B-value are within a toleranceof ±0.5%, so that the component can be used in many applications without temperature calibration and can also be replaced without readjustment. Hence, by means of simple resistance measurement,an accuracy of ±0.12 K at 25 °C can be achieved in this way. In the temperature range of -60 ...+85 °C, the maximum error is about ±0.5K. You can use any other high precision NTC, but then you'll have to change the Steinhart-Hart coefficients in de sketch to fit that NTC (see Steinhart-Hart approximation.)

The NTC is placed outside the house. In my case with a couple of meters of cable. To avoid interference from other electrically 'noisy' equipment in the house I placed a decoupling capacitor of 0,1 uF from the analog temperature input of the Arduino Uno (pin 14) to earth. The oscilloscope still showed some noise on pin 14 after that. The noise was caused by the clock of 1602 LCD display. It dissappeared after a decoupling capacitor of 0,1 uF was placed between the VDD and the Vss pin of the LCD display. This capacitor should be soldered directly on the LCD PC board with wires as short as possible (1 cm at most.)

The oscilloscope showed the signal on pin 14 was clean after that. To avoid noise and ripple from the switching power supply I placed an elco of 470 uF between the 5V and gnd of the Arduino

Placing of the NTC

To avoid faulty temperature measurements the NTC and its enclosure may never ever be in the sun. So it should be placed in the shade, preferably on the north side of the house (on the south side if you're in the southern hemisphere) or even away from the house. Not tight to the wall, but at least a couple of mm outside the wall, for the wall may be a couple of degrees warmer than the outside air. And preferably a wall with no heating behind it like the garage wall.

The LiquidCrystal library is included for the 1602 LCD commands. Several constants and variables are declared. Please read the comments in de sketch for more info. A, B and C are the Steinhart - Hart coefficients for the NTC I use. For other NTC's you have to change these coefficients. The integer interval on line 17 defines the time between two successive measurements, which is 3 seconds. In order to get a smooth progress of the temperature measurement a running average is calculated out of 30 successive measurements (numReadings on line 22). Hence the shown temperature is always the average of the temperature of the last 90 seconds. For the calculation of the running average an array is used: readings[numReadings] or in this case readings[30] on line 21. Each reading is an integer between 0 and 1023.