Smart window fan to keep your room cool. Will automatically turn on when the outdoor temperature is cooler than inside.

Smart window fan to keep your room cool. Will automatically turn on when the outdoor temperature is cooler than inside. 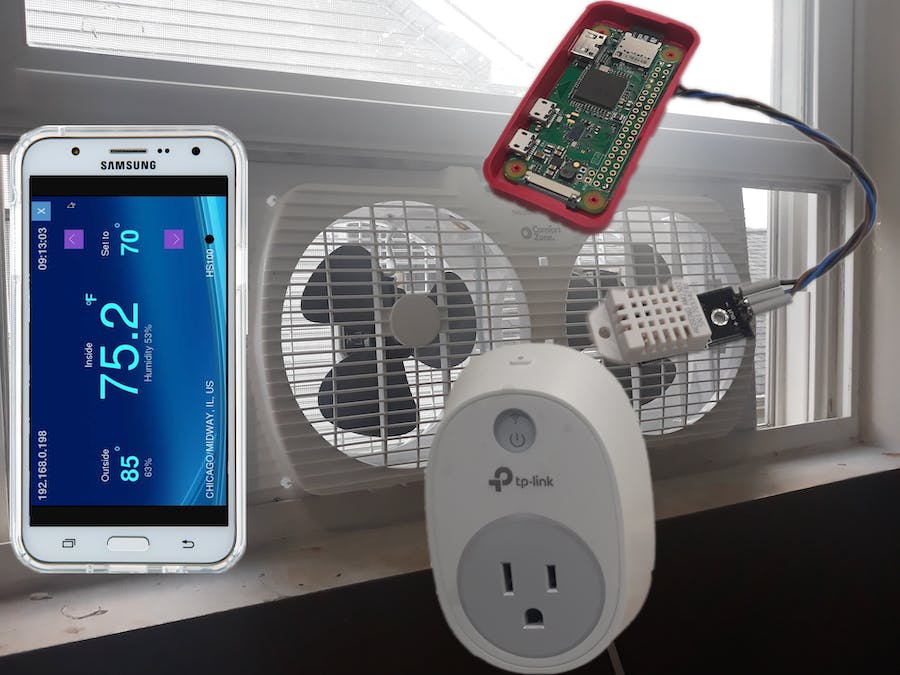 This project now is capable of running 2 window fans at the same time, one to blow in and another to blow out for better performance. But if you only have one fan, then one is OK.

Basic operation knowledge of the Raspberry pi is needed. Download the full Raspbian stretch image and burn to a 8GB or bigger SD card. To start, you should be able to SSH to the Raspberry Pi and also use the remote connection VNC. After burning the image create an empty file called ssh in the boot folder of the SD card. Also create a file called wpa_supplicant.conf and include your WIFI credentials.

Power ON the Pi and try connecting to it with SSH. Use pi@raspberrypi.local for the IP address or find the IP in your network with FING, an android App.

After the Pi boots up, you need to turn ON the VNC server on the pi using SSH.

Go to interfacing Options and enable VNC, then Exit.

Now connect to the Pi with VNC viewer from your computer and finish setting up your time zone and keyboard type. Use raspberrypi.local as the IP and raspberry as the password. Finish with the location and new password setup. At this time you should change the hostname from Raspberry Pi to smartfan. Go to Preferences and Raspberry Pi configuration. If you do not see the bottom of the window to hit OK, just press the Tab key 9 times and press Enter. Now smartfan.local will be your IP address.

Enter the terminal screen and upgrade if needed.

After the upgrade, you are ready for the installation.

You need to install the driver (included with download) for the HS100 Power plug, also the driver for the DHT22. Follow the Adafruit_Python_DHT for details.

The shortcut.sh file will create a shortcut on the Raspberry Desktop for easy operation. Run the script by typing;

To change the desktop for a single click go to file manager, click on Edit and at the very bottom select preferences. Select 'openfiles with single click'.

The DHT22 sensor is connected as follows. the (+) pin to 3.3V, the (-) pin to GND, and the signal pin to GPIO4 on the Raspberry pi. A 10K resistor might be needed between the data and (+ )depending on your model. Keep the sensor slightly away from the Raspberry pi to avoid reading the heat of the Pi. Also keep away from other electronics or sources of heat.

Follow the instructions included with the Power Plug to set up the WIFI connection for each plug. The Kasa App is capable of running more than one Plug. During the installation of the Kasa App on your Phone, you will be asked to create an account. Skip this part. You do not need an account to run the device. If you wish to learn about the driver go to https://github.com/branning/hs100, and download all the files.

You will have to edit the fan720.py file to work with your Power Plug. First find the IP address of each Power Plug. The easiest way to get the IP is to install an App on your Phone to scan your network. I use FING. You will also need the weather API code of your town. Go to https://weather.codes and at the bottom select your country and then city. These 2 items need to be entered on the fan720.py script. Another way to find the code of your town is by using Pywapi.

Replace barcelona with your town. Press Ctrl-D to exit.

At the early hours of the day the temperature will begin to rise, however the temperature inside is still low but a little higher than outside. You do not want the temperature to increase by blowing air that is warming up. Inhibit mode starts in the morning hours when the fans should be OFF to maintain the room temperature as low as possible. The default is set at 6 AM

Viewing the App on Your Phone

To access the Raspberry Pi on your phone, you will need to install the VNC viewer app, and also activate VNCserver on the Raspberry Pi as indicated above. Open VNC and enter the IP of the Raspberry pi the same way as using it on your computer. The smart fan screen has 3 buttons, one to increase the setpoint and another to decese. Also the button with an X is to close the window and return to the desktop. Also at the bottom right screen is a fan status indicator. Green indicates a signal is sent to the power plug to turn ON. Black indicates an OFF signal is sent, and yellow indicates the output is in inhibit mode and an OFF signal is sent.

The smart fan script is initially set at a resolution of 650x410 and it will fit in a 720x480 screen. If you get the error ‘No video mode large enough for 650x410’. It is because the Raspberry Pi screen is not big enough and must be changed. The default resolution is 720x480. Fullscreen can be changed on the script for troubleshooting.