Smart Farm - The future of agriculture

Smart Farm - The future of agriculture 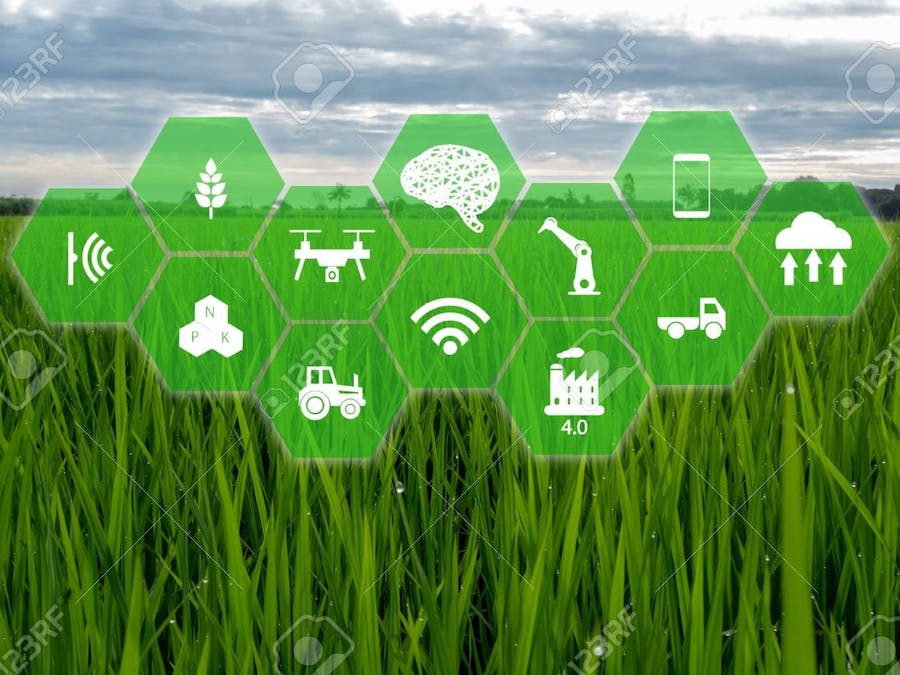 Agriculture, as of today is highly dependent on weather conditions and the framer`s experience in taking decisions. Often, the level of knowledge or insight is insufficient as it is not possible to monitor crops in real time. This leads to decreased yield, excess fertiliser or water disposal, insecurity against weather conditions, insecurity against weed or pest attacks, lack of knowledge of market conditions...the list is endless. This is a huge problem as at the rate the population is increasing very soon many countries are going to run into food and water shortages. Also, a decreased yield inhibits the purchasing power in the rural sector which affects the economic growth of the nation. In a country like India, where more than 50% of the workforce comprises of farmers, it is very essential to empower them so that they contribute to economic growth and are able to meet surging demands. Further, to control weeds and pests there is a prejudicial and unmindful usage of chemical fertilisers which not only deteriorate quality of the soil but also pose risks to public health. There is no way for the consumer to know whether the food he buys is safe from these fertilisers or not. There exists no single solution to all these problems

To help monitor crops, soil quality, weather, fertiliser use, water content and market conditions I plan to deploy a mesh network of nodes at the edges(the farmland) which would connect to the Helium network through a central monitoring station placed on the farm. The monitoring station would receive soil quality data including mineral and water content from the mesh of nodes, deployed on the farm atop poles at strategic locations, which would communicate amongst each other and with the station via BLE. The monitoring station would have a weather station to predict disturbances beforehand. Once, the data from each node is received it is processed extensively using Machine learning techniques and only those nodes where abnormalities are found are noted along with the type of error present and published to the network in a coded format, when the need arises. It must be noted that minor issues like water or mineral deficit would immediately be resolved by opening valves at the node where the error is present. This way, the irrigation is completely autonomous. The central station essentially is a quadcopter sitting atop a charging pad. Once, in every two or three days, it flies over the farm and captures images of crops of only those regions where mineral stress or any such unnatural growth has been detected and after analysis flies over to the farmer along with the data collected over the course of the past few days wirelessly over BLE. The imagery data and the analysed crop health parameters can be received by the farmer on his smartphone or desktop. This data can then be analysed for taking important decisions like harvesting or tweaking the irrigation plan. On the software side would be a web service written on NodeRed that would fetch data published onto the Helium network from the central station via a gateway and send notifications to the farmer alongwith geotagged abnormal behaviour. The farmer would be able to override autonomous regulations by the central station like change the irrigation plan or the imagery data acquisition. It would also fetch agri-market data from online feeds and inform the farmer about selling prospects. The farmer would have the option to publish collected soil quality data to the web service which consumers may subscribe to, to ensure that what they get on the table is safe to consume. The data would also be sold to research institutes. Current solutions involve flying a drone over the fark and having service providers to do the data analysis. There is a dearth of service providers and the drones are also very costly. Further real-time control cannot be achieved with existing systems. It reduces the workload of the farmer and solves all the problems mentioned before. This is the magic of data-driven farming.

The nodes would be based on the NRF52832 module sitting atop a wooden pole on the farm. Mounted on the pole would be a solar panel which would supply the capacitive soil moisture sensor and a TDS soil mineral content sensor(based on availablity). Also connected would be a solenoid value N1/2 which would regulate irrigation. These nodes would be placed around 50m apart. The central station would be situated atop a wooden pole with a large solar panel for charging a 8000mAh LiPo battery. A standard 250mm quadcopter frame with 6" propellers and powered by generic BLDCs would be used. The LiPo would supply a power distribution board on the frame which would then supply four ESCs and a Raspberry Pi 3B which would be the main controller. A Navio Hat would be the flight controller and would be controlled by open source Mission PLanner software on the Raspberry Pi. The RasPi would receive imagery data from an IR camera and a normal 8MP camera. The deep learning models for crop and weed classification has already been trained and verified successfully(Check my github please). The imagery data would be processed and inferences drawn with the help of an Intel Neural Compute Stick 2. The drone and the image classification setup have already been tested successfully (but independently). For storing data temporarily, an SD card would be used. For BLE host an NRF52832 module communicating with the RasPi serially would be used. For sending messages over large distances(~10km), the Helium Development kit would access the Helium network through a gateway(made with ESP32 and an RFM95 868MHz module). A webservice based on NodeRed would fetch data uploaded on the Helium cloud and notify the farmer in case of detected anomalies in the farm. It would also have a panel for the farmer to override and monitor current regulation procedures and tweak them. Also, it would give notifications about market trends and a provision for the farmer to upload collected data from the farm for use by interested consumers or agricultural researchers. Work has not been started on the webservice but I have done this before and will only need to tweak existing code. Now, that the build is outlined let me explain the implementation. The nodes would from a mesh network and transfer data sequentially to the central station at intervals of one hour. Even if the depth of the mesh is large, the latency introduced is negligible in this regard. The workstation would continually analyse this data and observe trends. The DL models installed would try to figure out if there exists any problem. If there is a moisture deficit at a node, the paticular node is alerted which then opens the valve for irrigation. As soon as moisture content is normal, the valve is closed. The nodes sleep for the rest of the time. If in turn a mineral excess or deficit is detected, the farmer is informed and the values published. Observing these trends, the farmer may command the station for an aerial view of the area at the end of the day and take necessary decisions after that. The sensor hat accompanying the Helium dev kit would log important weather data and inform the farmer beforehand in case of any disturbance. The webservice also subscribes to online databases for weather reports in surrounding regions to directly notify the farmer. At the end of the day, if the central station has not exhausted its quota of packets, it would send suggestions to the farmer after analysing the data from the nodes. After every two or three days or when the farmer desires, the central station hovers over stressed regions or regions which the farmer geotags through the webservice and takes imagery data which is then classified using DL models to inform the farmer about expected yield, weed attacks, crop health, growth rate and other suggestions like harvesting time, changing irrigation or fertilising plan etc. After analysis, the station flies over to the farmer and dumps all data collected on request to the farmer`s smartphone or laptop for him to analyse manually. The autonomous drone was made as part of another project. So was the image classification setup(part of academic project). The only things that I need to make are the nodes, add the Helium dev kit and configure the web service. For proof of concept, I will collect data from only two nodes(as I only have three solar panels) and automate error conditions(as I dont have access to a real farm). Also, for the image analysis, I will use plants in my garden. Hopefully, if the lockdown is lifted I can do real tests on a farm.

The benefits of using the Helium network

The Helium network is all set to spread to many countries. With Helium network, I can scale my project to include central stations at several farms in a village thus creating connected farming possible. Helium Console provides an intuitive peek into the huge amounts of data gathered. The data can be extremely useful for agri-marketers and consumers. Also, the soil quality data and mineral uptake would promote research in this field and help increase yield. A separate gateway would not be needed which would further decrease setup cost. Connected farms also help large firms delivering agro-based products monitor quality much further down the line in an automated manner, especially when farms are located far away from each other.

Smart farms would promote data-driven farming and data-driven consumption. It would save the world from an impending food shortage and bring millions of farmers out of poverty. It would impact-

This would benefit society by-

8 projects • 14 followers
IoT developer with interest in robotics, automation and electric vehicles and specialising in FPGA based vision applications at the edge
ContactContact