As we step into 2022, let's take a look back at some awesome projects uploaded to the internet over the last 12 months.

As we step into 2022, let's take a look back at some awesome projects uploaded to the internet over the last 12 months. 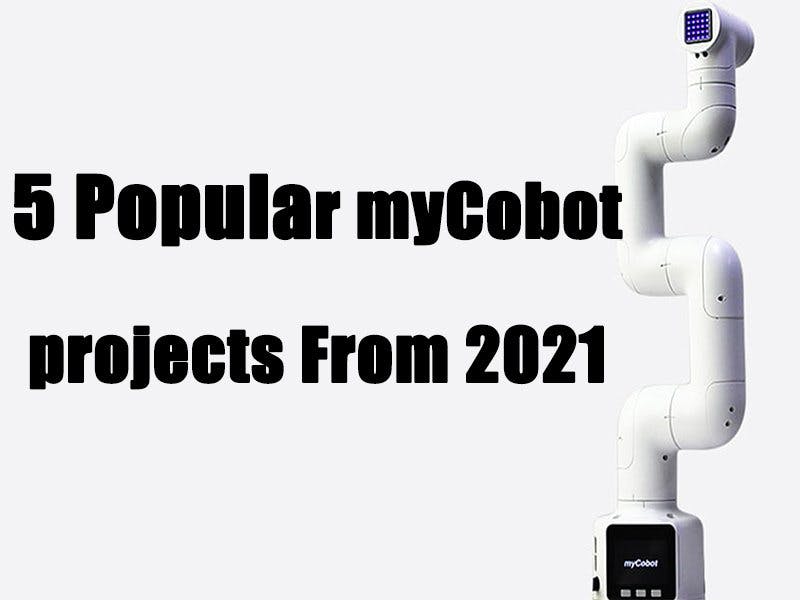 To commemorate the end of 2021 and another spectacular year of lots of awesome projects, we have compiled a list of 5 popular projects that were made over the last 12 months. Do note that these entries are in no particular order, and every single one is a great achievement.

1. Playing with the cat

Created by necobot, a Japanese software engineer. He bought myCobot for learning as he works for a robot software company. For the reason necobot was troubled by the invitation from his cat (4 months old) who came at 5 o'clock every morning, he programmed the movement of this cat-playing robot. It seems that the kitten will “play” endlessly with the myCobot from where he was taught by a robot how inexhaustible the kitten's physical strength was. This story was broadcast by lots of Japanese media such as Fuji News Network (FNN), ANN NEWS, Yahoo Japan, Hint-pot, etc for the innovation and love behind it. Someday I’ll play with my cat, necobot said to us.

Created by MK Tech Lab, a Japanese technology company. Fixed on myCobot, the projector cast the scene of a box that looks like it's floating in the air. By displaying the image of the viewpoint according to the position of the face, it looks three-dimensional and magic enough. They did not develop any new technology as a mechanism. Instead, they apply face detection with small AI cameras, laser scanning micro projectors, transmissive screens, and box-shaped video to process on the PC combined with Touch Designer to achieve.

Besides, the projector mounted on myCobot is quite difficult to stabilize with LEGO alone, but it can be expanded further with M5Stack.

Created by 小林竜太(Ryota Kobayashi), a Japanese maker/prototyper. He made his own myCobot from concept designing to applying showcases and recorded the overall process which took 17 days. In addition to that, inspired by a concept model of a domestic robot " Gantry Robot " to be installed on the "ceiling", he mounted myCobot upside down and made some applications. This idea reverses traditional concepts that myCobot stands on a desk with a flat base or G-shape base mounted. He made a simple bracket with a 3D printer so that myCobot was mounted on the rail firmly. Ingenuity is important he thinks.

Created by Tech Life Hacking, a Japanese electronic maker. With the advent of YouTube and Netflix, he started to watch videos on his smartphone while lying on the bed. However, he got tired if he hold my smartphone in his hand all the time. To smooth his path of watching videos in pleasant, he made a moving smartphone robot arm whose position can be adjusted automatically with a feeling. This 3D face tracking technology mainly applies myCobot Pi and the OAK-D OpenCV Depth AI camera. Besides, he wrote a detailed tutorial for this project on his website. At the end of the tutorial, he concluded, this time, I tried to track the face using a robot arm that can perform face recognition and complicated movements with the OAK-D camera. If you capture human movements with computer vision and move the robot arm accordingly, you will find that it makes a great variety of movements. I hope it will be helpful for your development.

Created by a team of university students from Aoyama Gakuin University in Japan. They tried to make matcha with myCobot 320 (A 6 DOF robotic arm with a payload of 1KG). The robot arm is programmed by Ryodai Horie, the Faculty of Cultural Policy in this school. They programmed myCobot in 4 or 5 actions in advance and utilized machine learning to find the chunks of tea ceremony movements. At their initial demonstrations, they used a video camera to capture the tea master's body movements. The program changed the movement of myCobot according to the motion of the tea master from a remote place. They got the Laval Virtual Prize of IVRC 2020 for their achievements.

2021 was a great year for creative projects that do everything from letting myCobot lovers bring their ideas to life to spreading robotics knowledge and geeks spirits. We at Elephant Robotics look forward to seeing what you guys can create in both the next year and beyond.