A fully automated fish feeder based on the Intel Edison, that cares for your fish and keeps you updated via WiFi!

A fully automated fish feeder based on the Intel Edison, that cares for your fish and keeps you updated via WiFi! 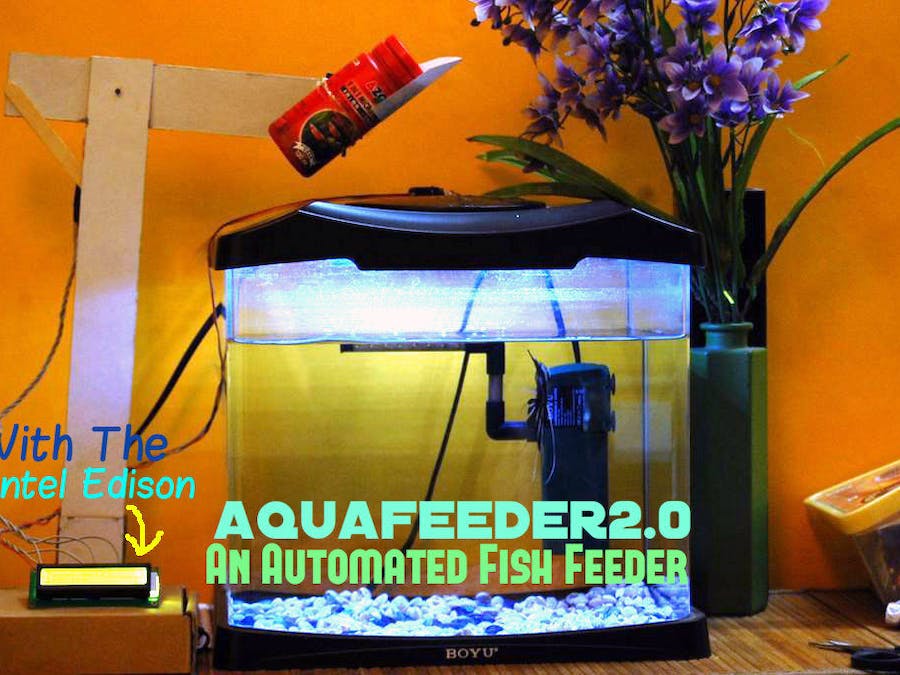 Looking after two aquariums isn't an easy job, especially for someone as forgetful as me. Sometimes, I'd forget to feed the fishies for several days until my mom would notice floating fish skeletons. Well, nowadays that never happens, because of the new AquaFeeder2.0 - a machine that feeds the fishes all by itself!

Yes, AquaFeeder is fully automated; all you have to do is leave it on 24/7, and it will automatically feed the fish twice a day. It does everything on its own, from opening and closing the aquarium lid, to dropping fish food. It also keeps you updated with the details of the aquarium and itself through a webpage that can be accessed by any phone, tablet or computer on your WiFi network.

AquaFeeder is a great machine that you could use if:

This isn't actually my first ever automated fish feeder; I made AquaFeeder1.0 about 6 months ago (check out its instructable too!). Unfortunately, AquaFeeder 1.0 desperately needed a serious upgrade. You couldn't really be sure if it actually fed the fish at a particular time or it failed to do so. It also needed some user interface which could allow someone to access it remotely.

AquaFeeder2.0 took care of those problems; it is equipped with the (incredibly powerful) Intel Edison, it now has inbuilt WiFi and Bluetooth and compatibility with several programming languages that unleashes a huge number of possibilities. Here are some of AquaFeeder 2.0's new features:

With these features along with a better CPU and program, AquaFeeder is now closer to being a commercial product than a prototype.

The bottom line: AquaFeeder2.0 is a vastly improved automated fish feeder that regularly feeds the fish all by itself, while using the sophisticated features of the Intel Edison to keep the user up to date with info about the aquarium and fish.

AquaFeeder's main job, simply put, is to feed the fish. For a machine, this actually isn't as simple as it sounds.

How does AquaFeeder2.0 feed the fish?

AquaFeeder has 2 user-set feeding times, which means it feeds the fishes twice a day. Whenever it's time to feed, one servo motor opens the aquarium lid, another servo drops the fish food into the water, and then the lid is closed again.

Video: This video shows how AquaFeeder feeds the fish using its servo motors.

When not feeding the fish, AquaFeeder's LCD displays the web synced time and it's IP address. The time to feed next and the previous time fed are also figured out and displayed on the LCD display for the user's convenience.

The Edison obtains the current time from the NTP server (one of the many official time servers where computers and other IoT devices sync their time with). This is very convenient as you don't have to keep setting the time manually. This picture below gives a brief of how the Edison synchronises the time with the Internet using NTP (network time protocol).

The Intel Edison obtains the exact time from the internet using the Network Time Protocol (NTP)...

As shown above, the lcd displays the time and IP address.

What's this "Fish Feeder Stand" and why do we need it?

The fish feeder stand I made comprises of the following parts:

All these parts have been made with cardboard and ice-cream sticks (for rigidity). Of course wood or 3D printing may be a better option. but I have no experience in either of them.

When you are designing the fish feeder stand here are a few things you must keep in mind:

I'd recommend first roughly drawing a plan of a fish feeder stand like I did (in the pic above) and then commencing to the next step...

Each column of the "tower" is made of two mountboards stuck together with ice-cream sticks in between (for rigidity). There are 2 such columns.To make 1 column:

Make two such "columns" for the tower, and then continue to the next step...

Step 6: Making The Stand's Base Support...

The base support attaches the tower the the stand's base. To make them:

The jib will hold the feeding servo motor directly above the aquarium lid. To make the jib:

Before attaching the jib to the tower, stick some pieces of ice-cream sticks on one column (of the tower) as shown in the 3rd picture above. The idea is that when we stick the two columns of the tower together, there should be a gap in between to fit in the jib.

To attach the jib to the tower:

Step 8: Attaching The Stand's Tower to the Base...

Now we've got to attach the Tower to the base. To do that, follow these instructions:

You can also use some super glue to secure the bond.

We now have to adjust the angle between the stand's "jib" and the tower. Place your stand next to the aquarium as shown in picture 1. Adjust the angle between the jib and tower, such that the jib doesn't come in the way when opening or closing the aquarium's lid. Then fix the jib's angle permanently using some PVA glue and ice-cream sticks, as shown in picture 2 above...

Attach a strong piece of string to the Micro Servo Motor and fix it just behind the lid's hinge (as shown above). I've used super strong 2 part adhesive which is way cleaner than nasty doubletape. After the glue dries, stick the other end of the string to the lid (see 1st picture) with a combination of insulation tape and super strong adhesive (see picture 3).

Prerequisites: Before continuing with this project, you should have done the following for thee Edison:

After following these basic getting started instructions, be sure to follow the following steps if you haven't already:

This page helped me with getting these instructions.

I simply connected a bunch of jumper wires to the required pins of the LCD screen. On the other ends of the wires I soldered on make headers (see pic above) so that they'd easily connect to the headers on the Edison breakout board). Note: Be sure to mark which wire is which in order to avoid confusion later on!

Now to the fun part - the circuit.

The circuit consists of:

I've arranged my circuit on a home-made breadboard shield, though you use a plain old half breadboard from SparkFun. Follow the pictures above to make the circuit...

Note that the motors only have to be connected later on...

The Arduino code is long. 800+ lines of code for me is flabbergasting! Anyway, the zipped folder is available below. Simply download it, unzip it and open it with the Arduino IDE. Before uploading to the Edison, follow these instructions:

Also, go the the line before void setup() where the WiFi ssid and password have been declared.

Changed these according to your network, and then upload the Arduino sketch to the Edison. Go on to the next step to test AquaFeeder!

Most of you wouldn't want to go through the entire code to try and figure out how it works and where each section of code, especially because there are 800+ lines of code (a LOT for a noob like me). So here is a brief of the execution of the Arduino code of AquaFeeder2.0:

void setup(){ //the setup part is run only once, immediately after the program begins

Checking if LCD works and Edison connects to WiFi:

Open the serial port on the Arduino IDE. After the sketch uploads, you should see the LCD display show "AquaFeeder" along with a loading sign. After that it would attempt to connect to your WiFi network (so be sure that your router is always on!). If it connects successfully, the LCD would display the Edison's IP address, while the serial port will show other WiFi details like signal strength.

Now, the Edison will make an attempt to get the time from the NTP server. If it does successfully, it will send the current time to the Serial port and display it on the LCD. The Edison will then open the "arduino" file (which we made earlier) and read the number variables off it, then determine the feeding times, previous time fed, previous day fed etc.

After all this happens, the Edison will go through the main loop(); the LCD will switch through showing the current time and IP address or next time to feed and previous time fed every few seconds. On the serial you should see the message "Listening to clients". This refers to the Edison's webpage.

I'm lazy, unimaginative, out-of-time and lack a 3D printer, so I had to end up with an enclosure made from the box the Intel Edison came in. Well at least the box looks better than the origami box I tried making earlier (which failed MISERABLY), and I can still use it to store my Edison if I like.

How you cut up your box is up to you; just keep in mind that the headers should be accessible and preferably the USB and DC connectors too.

It's time to move the AquaFeeder stand to the aquarium! I had to extend the servo wires so that it could reach the Edison that was placed at the base of the stand.

To connect the servo motors, see the Fritzing diagram above.

Step 20: Connect to Power and Test!

I used a 12V adaptor to power my Edison through the DC power jack.

After the Edison is powered up and the LCD is showing the time/IP address (i.e its in the main loop sequence), connect to the Edison's webpage (see Step 17). Click on the feed now link. After a few moments, you should here a few beeps, and some messages on the serial port that indicate that AquaFeeder is going to start feeding the fish.

AquaFeeder will first start opening the lid, while the LCD shows "Opening Lid". Then the other servo motor will rotate and jerk a bit and then return to its initial position. After that, the lid will be closed. Check your connections if either or both servos are not working!

If all tests worked great, you can now attach the fish food container to the feeding servo as shown above. And AquaFeeder is finished! All you have to do is leave it on the entire day, and it'll take care of the rest! 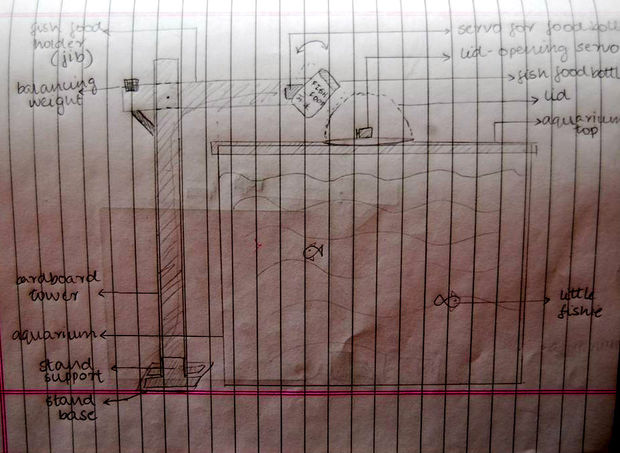 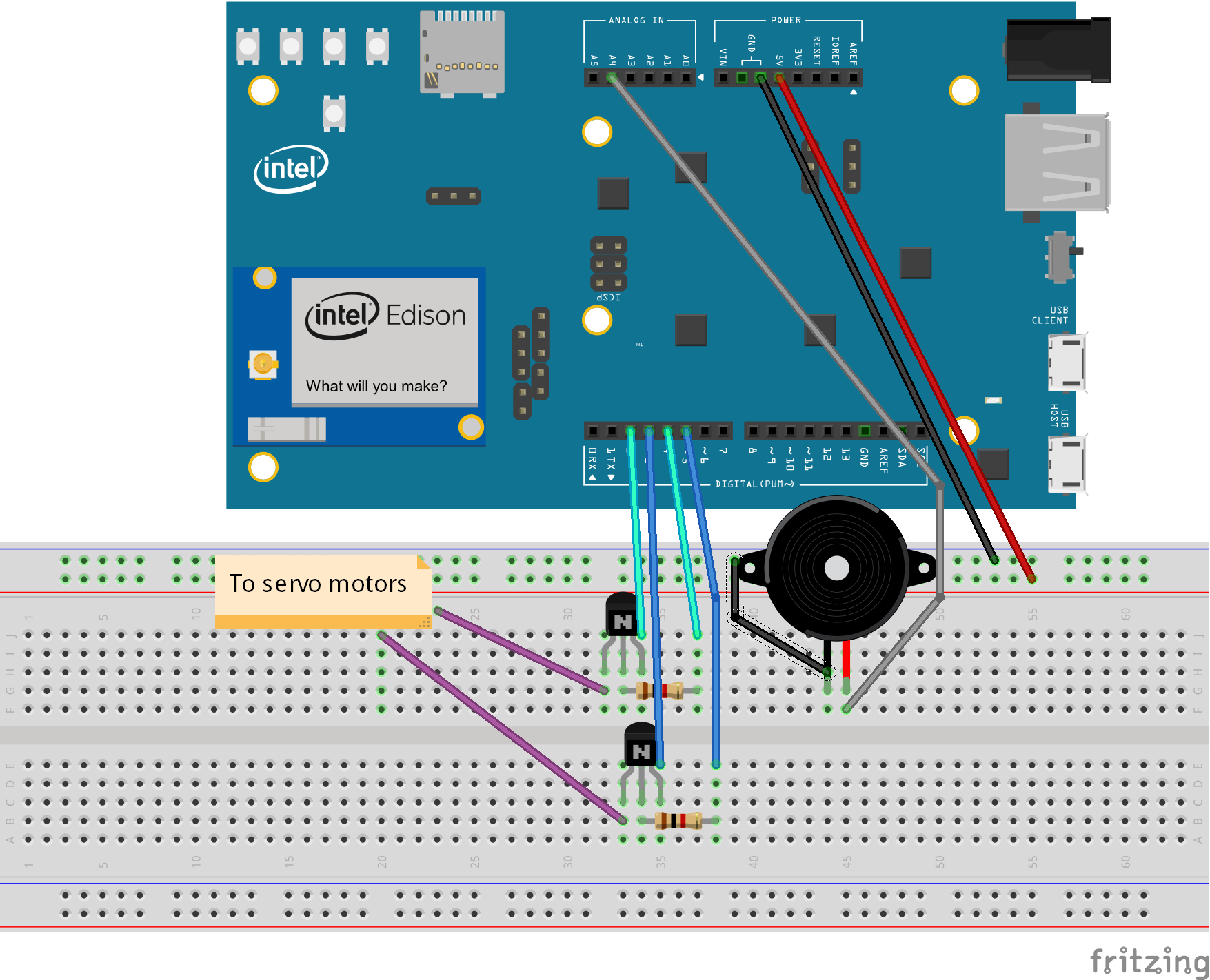 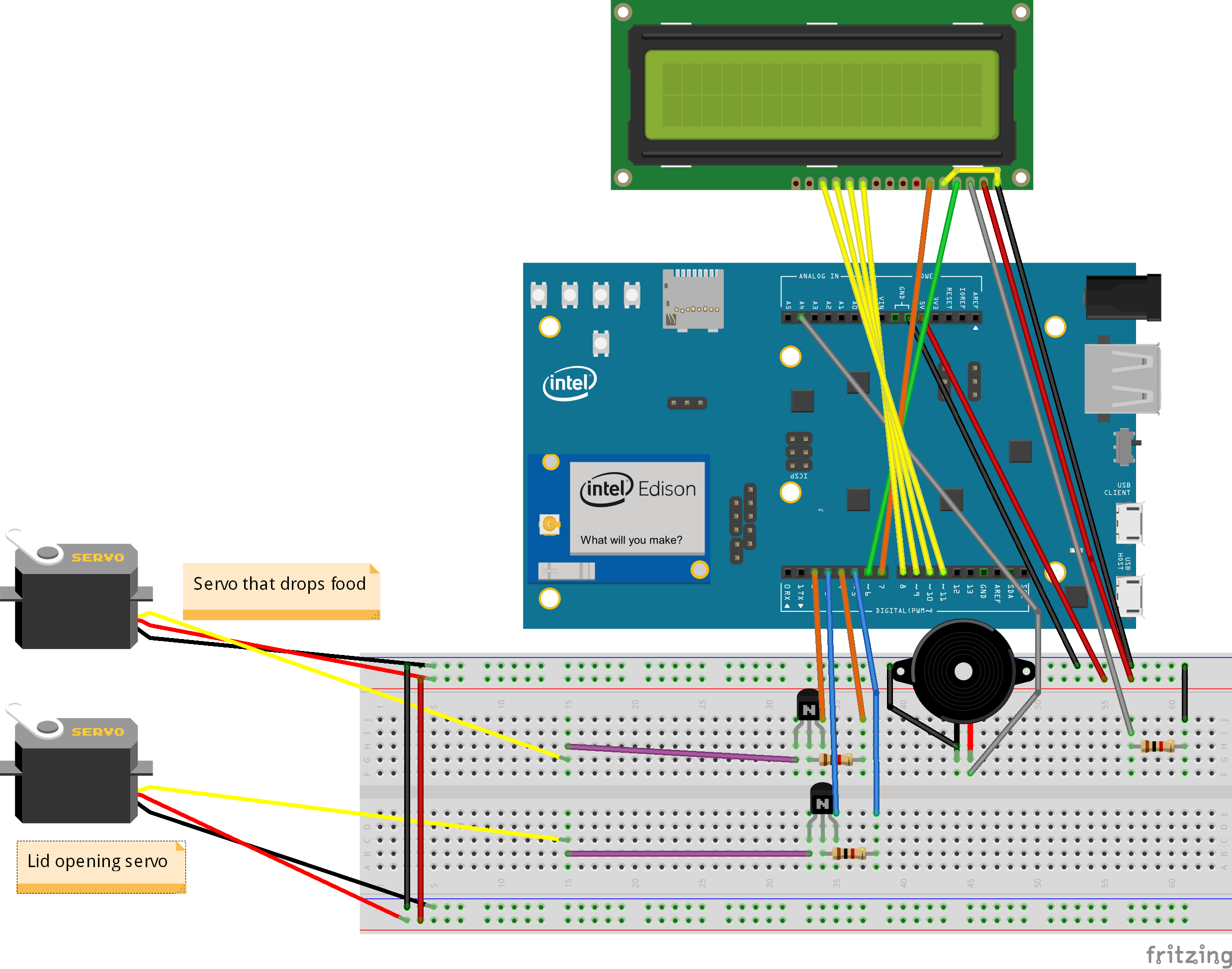 3 projects • 7 followers
I like electronics, Arduino in particular. I suck at programming (but i still try my luck at it). Other interests include music, particularly prog.
ContactContact