A controller to change effects scripts on the Pedal Pi using a Circuit Playground Express board.

A controller to change effects scripts on the Pedal Pi using a Circuit Playground Express board. 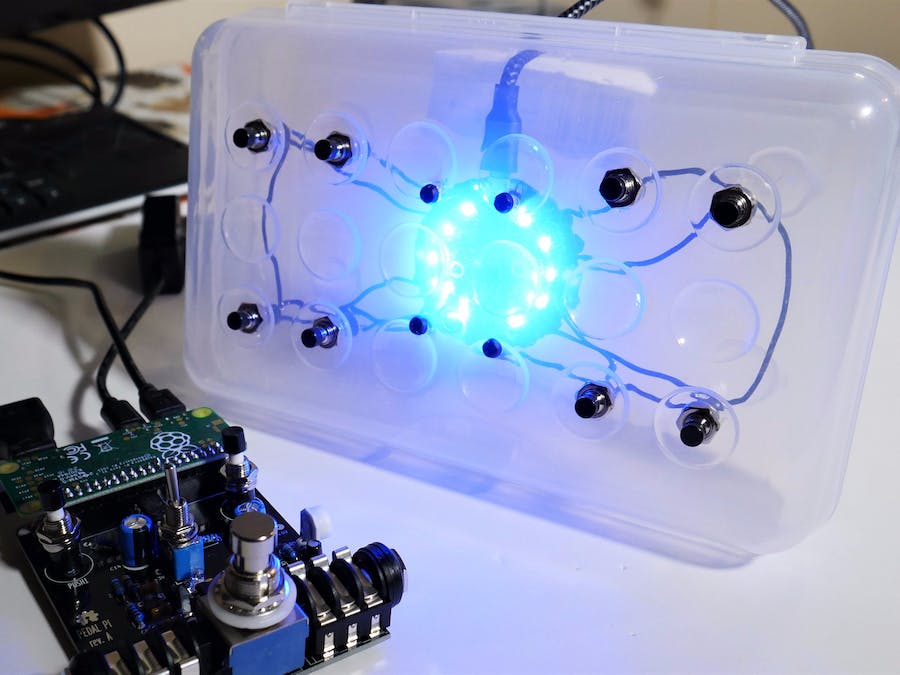 You can find a video for this project on my YouTube channel here.

The Pedal Pi is an open source guitar pedal that uses a Raspberry Pi Zero running Raspbian Lite to run C scripts of digital effects to play around with. It's made by Electro-Smash, an open source hardware company out of the UK. They have some other open source guitar pedals as well, based on Arduino boards but this is their first step into the magical world of Raspberry Pi. They have their own packaged ISO of Raspbian Jessie Lite that includes their self-written effects scripts so that you can change effects via the terminal, since the Lite distro does not have a GUI (of course you can use a version of Raspbian w/ a GUI if that's more your style, but personally for this application I think sans-GUI is the way to go). The only thing that I eventually found to be a bit awkward with the pedal was the act of changing effects. As a guitarist, I'm used to switching things around with my feet so that I can keep playing or not have to awkwardly balance my guitar. Typing into the terminal to change effects was a bit cumbersome so I decided to make a controller to print strings in the terminal to control the Pedal Pi.

I've been leaning towards Adafruit m0 boards lately for their Circuit Python capability and the built-in USB HID feature without having to flash firmware. For this project I was also going for some aesthetics, namely some LEDs so I decided to go with the Circuit Playground Express, a circular board that features, well many things (it is a playground after all), but in this case I had my eye on the 10 NeoPixels available to animate. Of course going with the Circuit Playground I wasn't getting the same number of digital I/O that I would with a Metro m0, which I did consider, but I decided instead of loading all of the effects as an option to switch between I would just select my favorites.

Despite the Circuit Python capability with the m0 board though, I did write this in the Arduino IDE instead. I had some issues with printing strings within Circuit Python. It's entirely possible, and more than likely, that it was a mistake in syntax on my part since I am still fairly new to the Python family and syntax is the main aspect of coding that I struggle with. I have some projects in the pipeline that I do hope to use Circuit Python for, but at this time the Arduino IDE seemed to be the easier choice for me for this project.

Speaking of the code, it's available at my GitHub link down below. It can be easily modified for different HID device purposes since this is a very specific need. I go into a lot of detail on how the code is setup and working in the video for this project, which you can find a link for up top where this story started. If you're interested in a write-up detailing the code structure please let me know and I'd be happy to add it to this guide.

I prototyped my code using aligator clips and a momentary push button that has a similar housing and form factor to a traditional latching switch used in guitar pedals to turn them on and off. This switch is great and eventually I want to revisit this project and use them for all of the buttons but at this time they're just a bit too pricey, approximately $6-$8/switch. Where I'm using eight switches that adds up fast. I ended up using a different type of momentary button that was a bit smaller but still had a similar form factor, only with a plastic top. I was able to get 10 in a pack for the same price as one of my dream switches so definitely more economical.

For a housing I basically knew going into this that this wouldn't be a final housing. Why? I think this project would benefit greatly from a 3D printed enclosure, which I currently don't have the ability to make. I have this idea for it to be a circle, with the Circuit Playground in the center with the NeoPixels facing up and then the eight switches arranged in a circle around the board; similar in form factor to the RotoVibe pedal made famous by Jimi Hendrix. But right now that isn't an option so instead I opted for a non-traditional housing; specifically a clear plastic pencil box that can be procured for $0.99 to $2 at your local discount store. A few reasons for this: 1. price of course; 2. clear plastic means that the NeoPixels will diffuse quite nicely; 3. It can be easily opened to access the components; and 4. It's easy to mod.

I created the holes in the top of the pencil case in a non-traditional way. When I use a drill in my projects, I'm actually borrowing it from someone else (aka my dad) and he was using his drill while I was working on this project so I had to get creative. I used a sharp and heavy screw to center each hole and then tapped the screw with a hammer to make a dent where I wanted the hole to go. Next, to create the actual hole, I grabbed one of my no longer used for food prep Ikea knives and slowly turned the knife to drill out a hole. It actually worked really well and I had really nice control over the size of the holes, even for the smaller holes to hold the mounting screws for the Circuit Playground board.

In keeping with the minimalist design I decided that I also wanted to avoid soldering for this project. For one thing I'm not finished playing with this Circuit Playground and second as I mentioned previously this isn't the final iteration of this project. Since the Circuit Playground is really designed to be used with alligator clips for quick prototyping I decided to riff on that concept by using some plastic nuts and screws to secure wires to the contact pads around the board.

The switches are also solder free. Because of the mounting solution in the pencil box, the wire is actually tensioned in mid-air around the button terminals, allowing for secure contact. Written out it sounds a bit haphazard but in practice it's actually worked really well. So far zero shorts.

Now to limit the number of cables...

After assembling the hardware and wiring everything up all that's left is to shred with the Pedal Pi sans keyboard (unless you're playing a synth of course). To do this, I first boot up the Pedal Pi and after the boot sequence has finished, it prompts me for a sequence of a username and password. I have one button programmed to send the username string followed by a beefy delay and then the password string followed by a beefier delay. After this, a third string is sent to change into the Pedal Pi effects directory folder. After pressing this button I can switch between effect commands (sudo ./[Fxhere]) by pressing the effect-specific buttons. To end an effect from running I have another button that sends CTRL+Z to end the scripts. This makes for two function buttons and six effects to take up all of the available digital IO on the Circuit Playground. Of course I didn't forget about the NeoPixels! For the start-up button I use the rainbow wave pattern and then for all of the others I use different colors in the color wave pattern that match the effect or command. For example, the CTRL+Z button flashes red, echo flashes blue, distortion flashes orange, etc.

And that's basically it for this project (so far). I'm considering this to be version 1. Of course the hardware and software can be adapted to be a controller or macro keyboard for basically any implementation. I look forward to exploring the tones of the Pedal Pi a bit deeper now that I can easily change between the effects with the press of a button. Open source FTW!

6 projects • 70 followers
\\ DIY-er on a quest to gather and share knowledge. She/her.
ContactContact