Display your Pop figures in style with some custom 3D printed parts and pretty NeoPixels.

Display your Pop figures in style with some custom 3D printed parts and pretty NeoPixels. 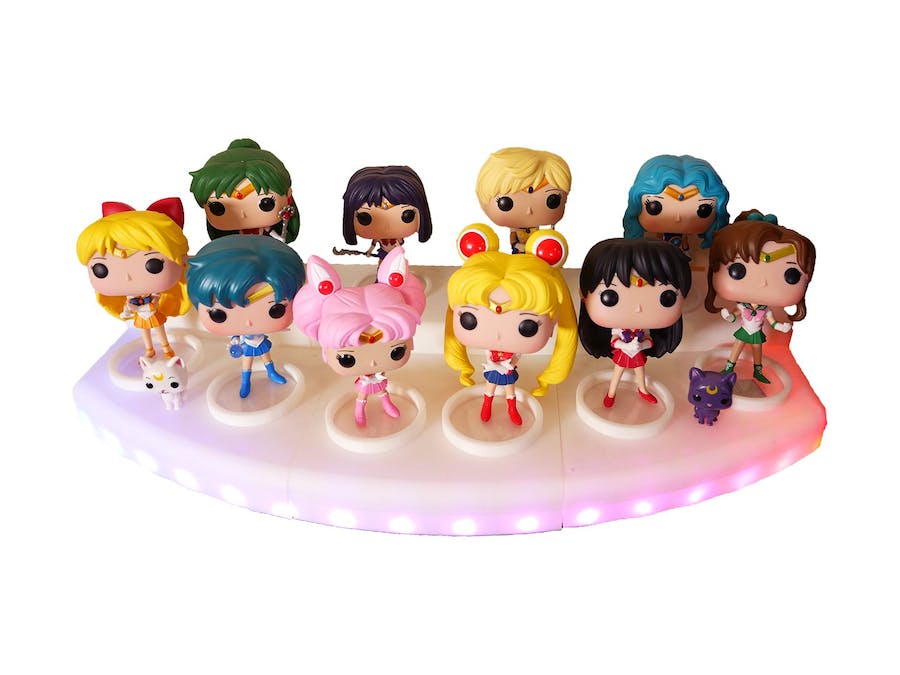 Pop figures have become the adult millennial's beanie baby. There's a Pop for basically every occasion, fandom and aesthetic, which can make it easy for collecting them to get out of control. Personally I've limited myself to only the few that truly make my heart swoon. These basically consist of 90's cartoons with the most rampant one being Sailor Moon.

Sailor Moon created this oasis of escapism that I desperately needed in the early 90's as a five-year-old. The first episodes that made it ashore from Japan are often criticized for their censorship, however if they hadn't been kid-isized then I would not have been exposed to Serena/Usagi and her merry band of Sailor Scouts so early in life. As I got older I eventually read the manga and saw the less so but still censored later episodes in the Toonami block on Cartoon Network and now as an adult we're right in the middle of a full re-release of the original anime and a more true to the manga anime series, Sailor Moon Crystal. What a time to be alive.

This was all a very long winded way to say that I have accumulated the Sailor Moon Pops, including the outer planets, but this created a problem: how to display them all properly? It's quite the large cast and as a result getting them all into view is an issue on my small shelf.

Neptune? Uranus? Saturn? Are you okay back there?

I decided to design and 3D print a display stand for all of them. I wanted it to be tiered so that the inner planet Scouts along with Sailor Moon and Sailor Chibi Moon would be in the front and then the outer planet Scouts would rock it from the back. I started by first measuring the base of the Pop stand to get the diameter to be used for the design. I did some test prints until I got the fit just right and then sketched out some design ideas.

While sketching I decided that I wanted a strip of NeoPixels to be embedded in the front of the stand running a rainbow light effect. I thought this would reflect the vibe of the Sailor Scouts well and make the design process a little bit more interesting.

After the prep work I went to Fusion360 to model it. First I took the test model that I had created to check the fit for the Pop stands and duplicated it so that I had one for each Scout. Then, I positioned them so that they were symmetrical and evenly spaced from each other.

Once I was happy with the placement, I sketched out a shape for the stage and extruded it. After the initial extrusion I extruded the top tier that would eventually hold the outer Scouts.

Next came carving out the lip where the NeoPixels would be inserted. I used parameters to hold the NeoPixel strip width and height to make this process easier and also adjustable if I found that the fit was off. Then I added some filets to the front edges to make it both an easier print and prettier. Finally I added a cut out in the bottom that would hold the electronics, which is basically a Trinket M0 board and a small cut out in the back wall for a USB cable.

It was a fairly easy and painless design process, but I hit a bit of a wall when I exported to Slic3r: it was way too big for my printer's build plate. I went back into Fusion360, did a reality check on the size of this thing, and used the line sketch to divide the stage followed by the split tool with the lines to split the stage into four seperate bodies.

With the end assembly in mind, I then extruded pegs on the sides of the new bodies. The pegs were then used to perform cuts into the bodies so that when it was time to glue everything together the stage could be slotted rather than trying to line the sides up freehand. For the holes I used a.2 mm tolerance meaning that I made the holes.2 mm larger in both width and depth than the pegs.

Now it was finally time to print. Each print took between 9 to 12 hours with 10% infill and.2 layer height. I did use supports on the build plate to support the pegs. Everything was printed in white PLA and with these prints I finished off my first filament spool.

The electronics for this project are very simple. It's just a Trinket M0 board running CircuitPython and a NeoPixel strip. I soldered the strip directly to the Trinket by stripping the ground, 5V and data wires on the strip so that they would be soldered directly to the GND, USB and D1 pins on the Trinket.

The Trinket M0 is running CircuitPython and since the goal is to just have the NeoPixels in rainbow mode, it's just running the example script for rainbow_cycle(). I recommend using Mu to edit your CircuitPython code, especially if you feel a strong attachment to the Arduino IDE and it's been holding you back from trying CircuitPython. It gives you that same functionality where you can upload your code thru the GUI and also have a debugging window to check your code and look at any serial data.

After days of printing, it's finally time to assemble. I used E6000 glue to bring the stage parts together. It's become my go-to glue for PLA parts. I like to use a tooth pick to spread the glue around since it gives you a little more control. The pegs and holes were extremely helpful and worked really well. I don't think that the assembly could have happened without them.

I used hot glue to tack the NeoPixel strip in place and to both hold down and protect the Trinket M0 from any shorts. The USB cable was also hot glued into the cut out in the back for it. I don't plan on taking this cable out from this project so it was a bit of a sacrificial part since it will act as the power supply.

And after that, the stage was ready for the Sailor Scouts!

Overall this project is very simple but it uses some techniques that I'd definitely recommend and will be using myself in the future. The peg and hole sets were a life saver for the assembly process after chopping up the stage and were also pretty easy to implement in Fusion360. Soldering components directly to a MCU board is a real space saver and ensures a super stable connection. And finally hot glue is a maker's best friend.

6 projects • 69 followers
\\ DIY-er on a quest to gather and share knowledge. She/her.
ContactContact