Learn how to build a really cool persistence of vision display for $1.

Make a PoV Display with ATtiny13 for $1

Make a PoV Display with ATtiny13 for $1

Learn how to build a really cool persistence of vision display for $1. 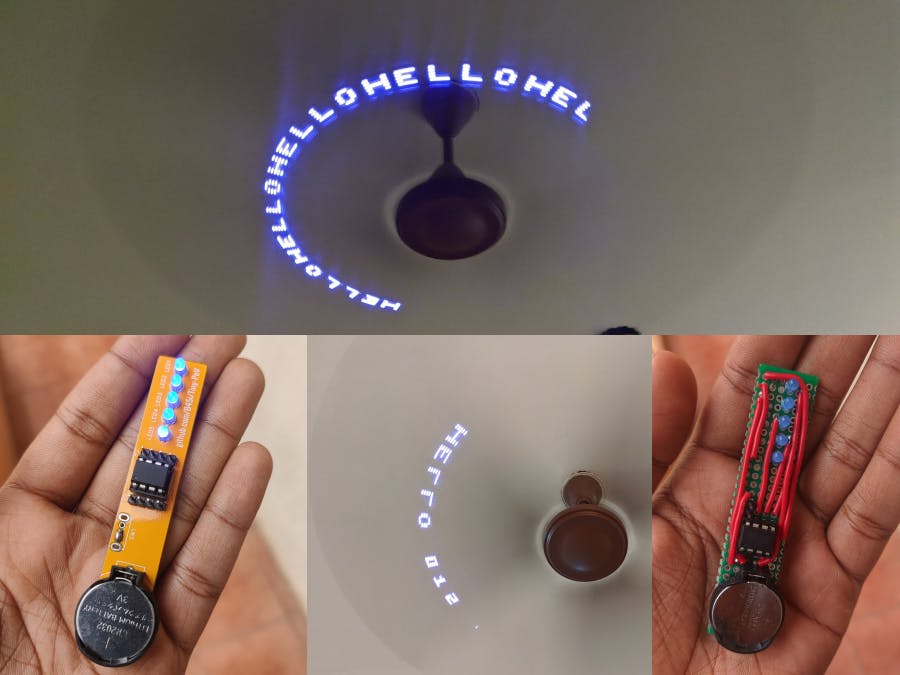 I was browsing through AliExpress sometime back and this particular listing caught my attention.

Isn't that amazing, a programmable microcontroller! for ₹25.

I googled "ATtiny13 Arduino" and yes, ATtiny13 is supported by Arduino. AWESOME.

ATtiny13 has limited library support, so I was not able to do anything with it, other than blink an LED.

A project that I did a long time ago came to my mind as I thought of what more I could do. It was a PoV display using ATtiny85.PoV Displays are basically a bunch of blinking LEDs with some carefully placed delay.Both ATtiny85 and ATtiny13 have the same pinout.

The total cost of the components for this project is under $1. If you are in India you can get the ATtiny Microcontroller from this link.

You will be needing these components for this project

What are PoV Displays and how do they work?

According to Wikipedia, the Persistence of vision is the optical illusion that occurs when visual perception of an object does not cease for some time after the rays of light proceeding from it have ceased to enter the eye.

If you look at a normal display the pixels are arranged in a matrix fashion.But in a PoV display Pixels/LEDs are arranged as an array.How does it display anything you may ask, that's where the Persistence of vision comes into play.Our eyes won't be seeing different columns of LEDs, they would see what appears to be a proper image.

Setting up Arduino IDE for ATtiny13

You might be looking at the ATtiny13 and wondering "How the heck am I supposed to program this thing, it doesn't have any USB port like an Arduino".

Well to program this Microcontroller you need another Arduino, something like Arduino Nano or Arduino Uno.

Connect your Arduino Nano / Uno to the computer using a USB cable.

Open Tools -> Boards and Select your board (Uno / Nano not ATtiny13).

Now we need to convert our Arduino into a programmer (Yeah, we can do that)

If the upload is successful then you can use your Arduino to program other microcontrollers.

Now we need to install the hardware package for ATtiny13 on Arduino IDE as the IDE doesn't support ATtiny13 by default.

Now you will be able to select ATtiny13 from Arduino IDE

We need to change few more options in Arduino IDE

and set the following values

Now it's time to connect ATtiny to our Arduino.

Connect ATtiny to Arduino as follows (In ATtiny Pin 1 will be marked using a dot .)

This is a one-time setup, you DON'T have to repeat it every time you upload code to ATtiny

This will burn the bootloader to ATtiny, now you can upload programs to ATtiny using Arduino IDE.

Open a new Sketch in Arduino.

Copy code from this link and paste it into the newly created sketch.

If you want to change the text on this line:

Based on the speed of the motor you are going to use, you might want to adjust the code, update variables DELAY_TIME and CHAR_BREAK

You might be staring at the code and wondering how some random numbers can represent a character, and how we can use them to blink LEDs properly.

But this method will take up lots of memory, And we’ll have to use multiple loops to iterate over them.

Now, that’s not a great approach for an ATtiny13 which doesn't have much processing power.

Flagged Enums to the rescue!

Instead of representing a character using a matrix, we represent it using an array. Our PoV display has 5 rows and 5 columns, so we will use an array of length 5.

Each element in that array will tell us if we need to turn on a particular led or not.

We assign a number (enum) to each LEDs, these numbers will be powers of 2.

These numbers have a speciality, no matter what the combination, you will get a unique number if you add them.

If an LED is off, we represent it using 0.

Let's look at how we can represent the letter "A".

Elements in the array will be:

It’s simple, You do a bitwise AND operation with the number and the enum for the LED, if the results are enum then we need to turn on the corresponding LED.

This concept is commonly known as flagged enums.

You can add more than just alphabets and numbers.

Manually generating these arrays is hard. so I made not one but two apps for this.

The first one is written in Preact and it was specifically made for this project, it supports up to 5 LEDs.

The second one is written in Angular and it can support n number of LEDs,

Just generate arrays using these apps and add that code to the array in the sketch.

The PoV display Circuit is fairly simple. You can wire up the circuit using the following circuit diagram.

You can use a Prototyping PCB to solder the circuit.

I've designed a PCB for this circuit. If you are using the PCB, then you don't have to do any wiring, just solder the components.

You can order the PCBs from here if you’d like to.

or you can download the PCB files from here and order them from your favourite fab house (I recommend PCBWay use this link and you will get a $5 coupon).

Solder everything, Add battery, Turn on the switch and attach it to something that rotates, like a mini motor or even fan(Don't forget to adjust the delay in code based on the angular velocity, this might take some trial and error).

And that's it, now you have a PoV display, you will be able to see the letters on a moving object Have fun 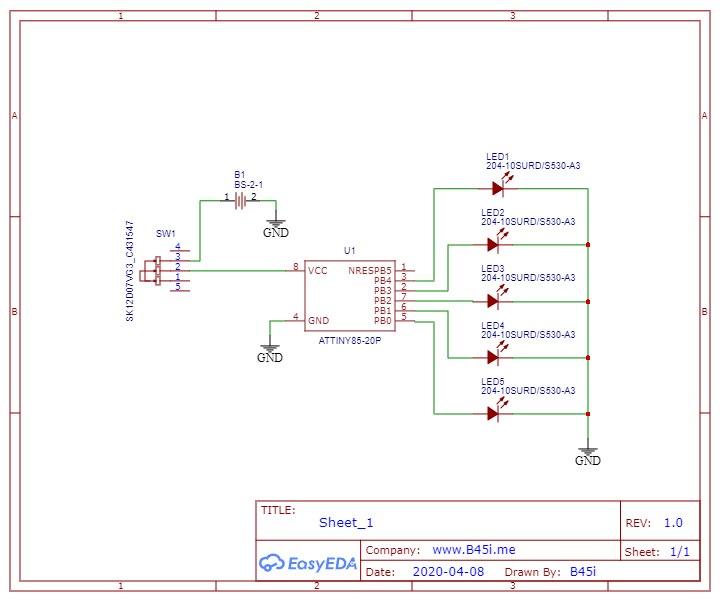