A 3D Printed BOOMBOX made completely from Scratch.

A 3D Printed BOOMBOX made completely from Scratch. 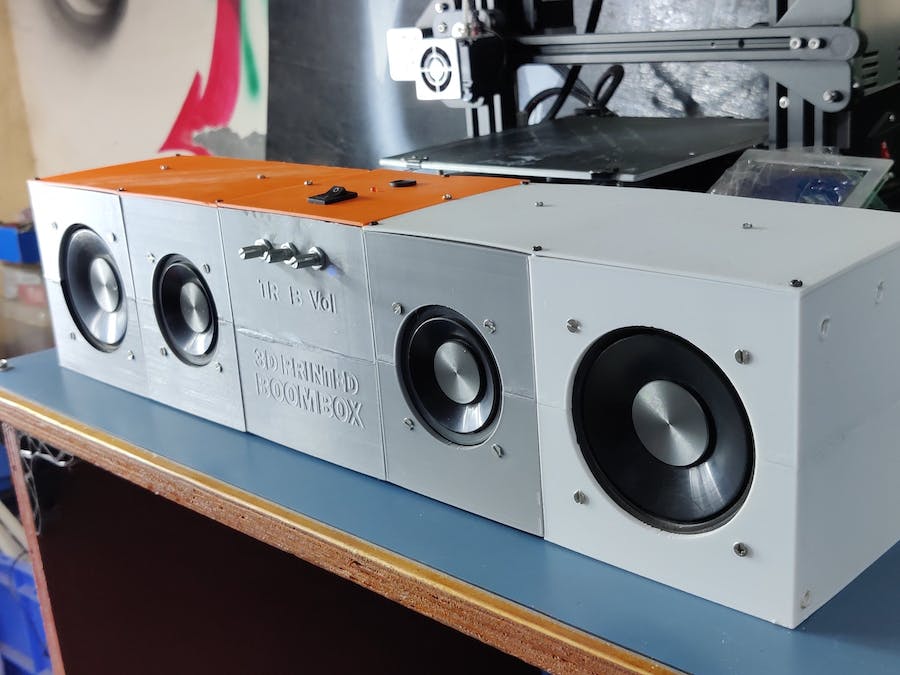 So this is my 3D Printed BOOMBOX Bluetooth Speaker which is a completely 3D Printed Speaker setup that houses Four Speakers with a 100W Bluetooth Audio Amplifier Module based on TTPA3116D2 100W Audio AMP IC.

Originally this was supposed to look Shiny and metallic because of a Metal finish Paint but I have done any surface finishes on it yet.

Okay, so the first thing that comes to mind after seeing this speaker is, it's pretty huge, and making this huge speaker did cause me a lot of problems.

here's the first problem, currently I only had an ender 3 printer which works perfectly but due to its small built plate, I had to print parts in pieces which really took a lot of time.

then there was a warping issue, and other small stuff like bed leveling problem, print failed mid-time, etc. each of these snags was all a chance to learn something and we can do better next time.

Aside from all the problems, in the end, I completed this project which took more than a week, and the end result looks and works perfectly.

As for the painting process, I'll prepare a separate video about the filling, priming, and painting of these 3D Printed parts soon!

In this post, I'm gonna show you guys the whole built process of this Speaker setup.

So let's get started!

So the speakers that I'm using are from my old home theater setup made by Samsung, I salvaged speakers from it and prepared a Body or an enclosure for them.

Also, this speaker setup is made in such a way that we can add two more speakers to make it a 3x3 speaker with much more power output.

Here's how this is possible, I've placed two-speaker on the left side and two on the right side, On each side two speakers are housed in their own bodies.

we prepare a new speaker body and add it in between these two on both sides.

the result will be a much taller BT Speaker which will be louder than the current setup but that is just a point for a later improvement.

Let's start first with the materials that I've used.

Making a BT speaker requires very fewer parts, you need a driver which in my case was a 100W*2 Bluetooth Audio Amplifier Module, this module uses TPA3116D2 which is a 100W Filter-Free Class-D Stereo Amplifier, I got this from PCBWAY's gift shop.

PCBWAY gift shop is an online marketplace where you can get a variety of electronics modules and boards for their genuine price or you could use the PCBWAY currency which is called beans.

You get these beans after ordering something from PCBWAY as reward points or you can also get them by posting any project in the PCBWAY community.

Check PCBWAY out for getting great PCB service from here- https://www.pcbway.com/

Then I used more than a roll of filament in this project.

The filament material was PLA and color doesn't matter because I'm planning to give this speaker metallic silver paint soon!

I modeled this speaker in fusion360, the modeling part took time but the end result was this BT Speaker which is made in parts.

In total there are five separate enclosure sections that will be attached to each other with help of nuts and bolts.

now, here's an issue, each body was taking too long time to print even with a 0.5mm nozzle, so I divided each model into two parts, top, and bottom.

I printed all the parts in two sections, so I had to make them a single part again by gluing them together with superglue, you can use a special 3D Print material glue here but normal super glue will work fine as well.

I did this with a total of 5 sections and the end result was a complete single PC enclosure for each speaker.

Also, about the print settings, I used a 20% infill with supports, 0.2mm layer height, and a 0.5mm nozzle. 0.5mm Nozzle helped a lot in reducing the print time.

Also, If you dont have a 3D Printer, you could use PCBWAY's 3D Printing service for this project.

Making parts on your own is good but getting them made by a professional manufacturer is better as they will provide high-quality stuff which will improve the overall quality of the project.

The Assembly process includes adding a speaker to its enclosure first and then attaching each speaker enclosure with each other in ascending order.

the process is really simple, we add the first two enclosures with each other with M4 nuts and bolts. Tightening each nut and bot is crucial here as each part will support the next one so nothing should be loose here.

Next, I added the 4 ohms speaker in its place which was the second enclosure with 3D Printed bushes.

After tightening every nut and bolt, we got this nice 3D Printed enclosure that holds two speakers. now all that is left is to add the remaining three enclosures with this body which includes a battery and amplifier enclosure along with two more speaker enclosures.

I prepared two more speaker modules first, I added the remaining speakers in their assigned enclosures and now all that is left to do was to mount everything together.

Tightening each nut and bolt is the key here which would make this setup sturdy and rock hard.

Next, we have to set up the lid and the audio amp with a battery wiring setup.

It's actually pretty simple, I've added a switch in between the battery and audio module, a charging jack has been added on the battery's VCC and GND port with a diode in between DC jack output and battery input port.

Also, I've added a 3mm led on dc jack side to indicate the Charging mode.

After wiring everything with LID, I placed the audio amp in its place and secure the pots in their place with nuts provided with the audio amp.

In the end, after placing the amp in its place, we finally connect speakers 1 and 2 in parallel and connect them with the Left side and speakers 3 and 4 on the right side of the Audio amp ports.

PUTTING ON THE LID

After finalizing the wiring, we put on the lid on each section and attach them permanently with 2mm screws.

and the speaker is finally ready to rock and roll. Not exactly as we still need to paint it which I will do in the next video. for now, this is the final product.

Let's see how it sounds.

Originally, I wanted to print this completely from grey pla and then apply metallic silver on it to make it look something like this.

But because of some stock reason, I was unable to purchase the metallic paint this week.

Stay tuned because I'm planning to paint this setup in the next post.

This is it for today guys, thanks PCBWAY for supporting this project, checkout PCBWAY for getting great PCB service along with other services like 3D printing services for very less cost.