A technique for drastically reducing the pins required by a matrix keypad is described.

Only Three Pins for a 4x3 Keypad

Only Three Pins for a 4x3 Keypad

A technique for drastically reducing the pins required by a matrix keypad is described. 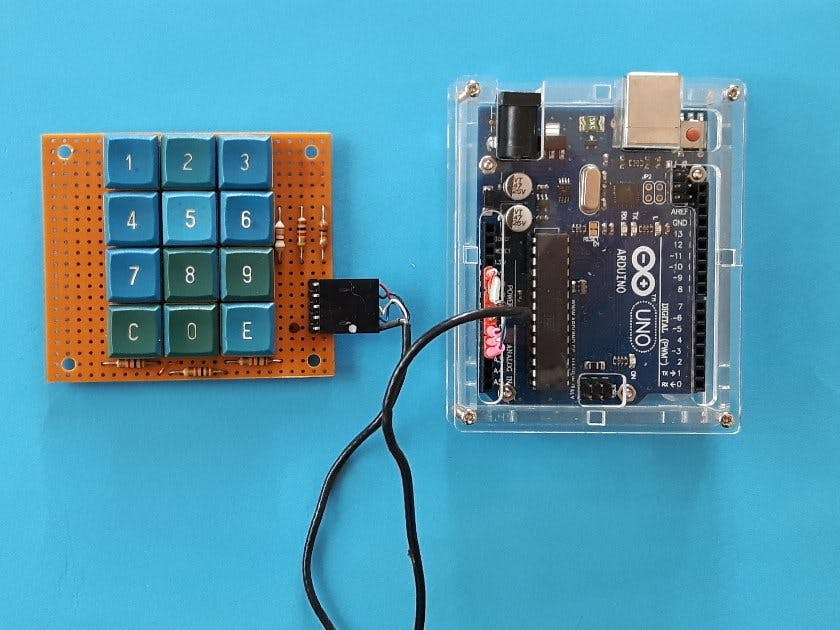 The aim of this project is to significantly reduce the number of pins required by a numeric keypad. This is because we often need many I/O pins compared to those available on the Arduino Uno or Nanoboards.

The ordinary numerical keypads are structured in matrix: a 4x3 keypad, requires 4+3 Arduino digital pins. Numerous libraries are available on the net to use it with Arduino.

The solution I propose is much better because it uses only three analog inputs, with a circuit like the one shown in thefollowing figure.

For each column there are only 4 voltage values, corresponding to each of the 4 keys, plus zero volts in case no key is pressed. In the equivalent scheme (b) the R1e indicates one of the four resistors R1-R4, while R2e is one of the three resistors R5-R7.

Now let's see how to make the four widest possible intervals. First of all the resistors R2e = R5 = R6 = R7 can be made equal, then we can set R1 = 0 to have the outputs corresponding to the first line at 5V.

As you can see, the intervals on the threeoutputs are the largest possible and you can use six standard resistors with atolerance of ±5%. With an extra analogue input and another resistor, a 4x4keyboard can be used and so on. The following figure shows the connections withArduino.

In the diagram the resistor R1 is connected toline 2 because the one on line 1 has drawn it with a wire, so the resistorreferences have been scaled by one. Pin assignments can be modified accordingto needs, as long as they are pin configurable as analog.

Of course, if Arduino is powered at 3.3V, nothing would change because the ADC converter as default uses the supplyvoltage and the ADC numbers don’t change.

To test the program, not having a keyboardof this type, I built it with recycled keys, the figure below shows myprototype. The 5-pin right connector is used to wire it to Arduino.