Design of a prop bomb with a chronometer, button, and 8x32 LED matrix display.

Design of a prop bomb with a chronometer, button, and 8x32 LED matrix display. 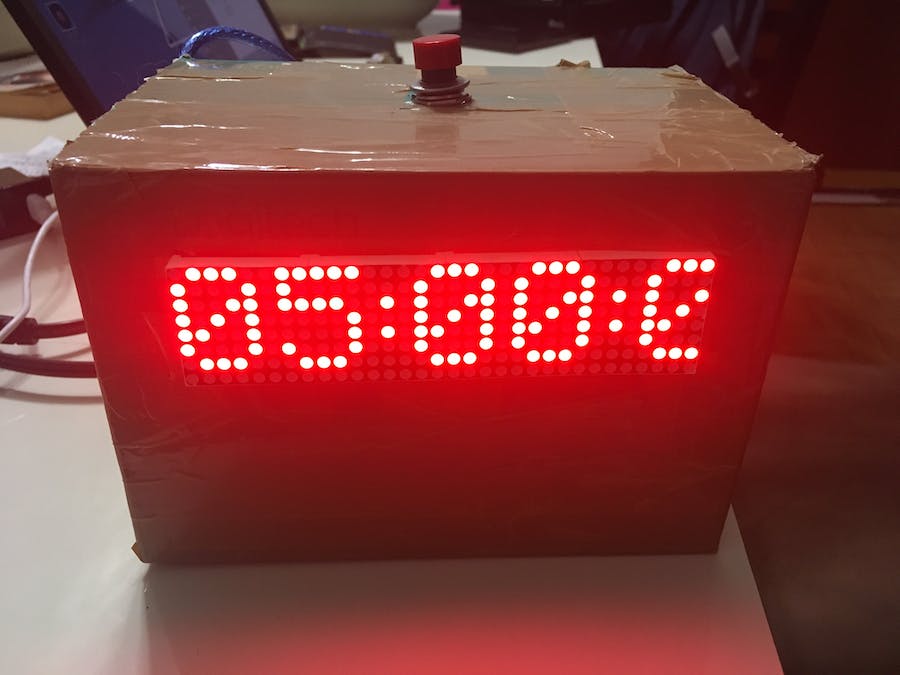 One day I was sitting at my computer, with some caffeine in my body since I was studying for my microcontrollers exam. Suddenly and without warning, I received a notification of WhatsApp on my cell phone, the message came from the theater teacher in the high school section of my university, the message contained a request for me to design a prop bomb for a theatre play, to which I replied that I would do it without problems.

I met with the professor one day at the university to agree on the characteristics that the pump required and so I could make sure I could do all of them in the project. After a long talk about the theatre play and the characteristics of the bomb, I came to the conclusion of what the final design should look like.

I agreed with the professor that the pump should have the following characteristics.

Due to the simplicity of the project, it is obvious that you make the decision to use an Arduino UNO (Image A) to perform these functions, although any microcontroller assigned to this task can work well.

A. Arduino UNO board.

The first task I did for this project was to find the right button for activation, I knew perfectly that a simple push button was not flashy enough for a "movie" bomb, so looking through my electronic components I found the following button (Image B).

Once with the button ready, I decided to use the pull up configuration (Image D) for buttons in digital circuits, using the internal resistance of the arduino board as shown in the following diagram (Image C).

For the display, things got a little complicated, because you needed a much more striking screen than an simple LCD, so as an alternative, I got a much larger LED matrix 8x32 (Image E, F and G) but difficult to control, for this project it was decided that the connections are made as shown in the diagram (Image H and I), however it is possible to change the pins in the code to any digital pin..

For everything to work properly, you must install the following libraries:

You can download it from Sketch-> Include Library-> Manage Libraries (Image J and K).

Once the libraries are installed, the program should work without problems.

Once all the connections are made, we assemble everything together inside a cardboard box, to give it the shape of a film bomb.

As a source we will use the powerbank so that the bomb works wireless.

In the end they used the bomb in the play and it was a great success, since they had no intention of saving the bomb, they returned it to me, they paid me 50 dollars for the work and they all lived happily ever after.

Thanks and keep hacking!

13 projects • 27 followers
I am a Biomedical engineer who likes to develop hardware and software solutions.
ContactContact