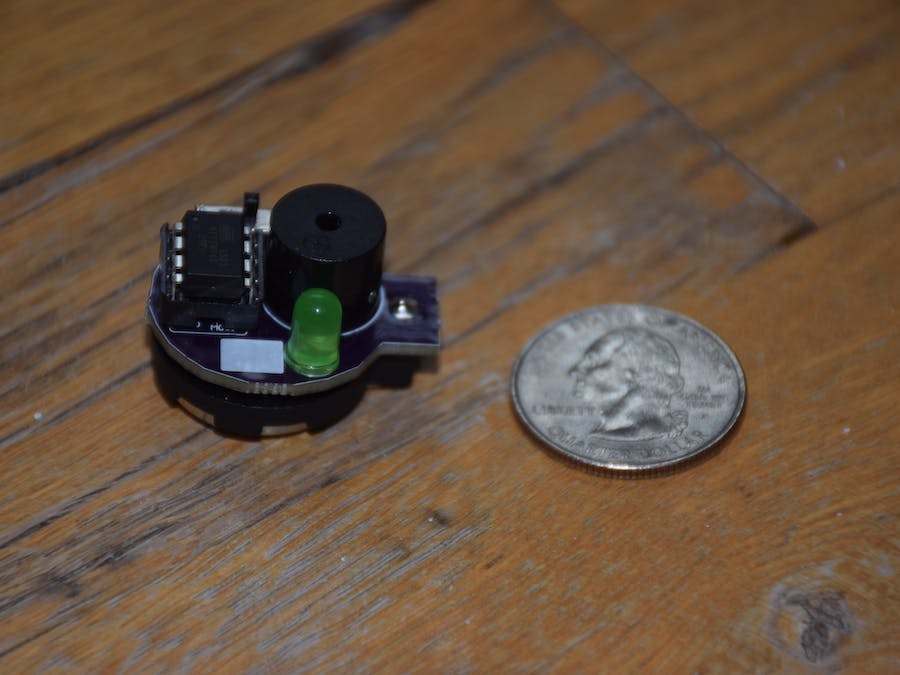 Small enough to slip in a mint tin, yet loud enough to be heard across a house at only a few dollars per unit. A nice combination for a pretty good prank! Let's dive in!

Step One: The Circuit

I have also included a white silkscreen rectangle on the PCB in case you want to write your prankee a small message :). If you would like to customize the PCB, just duplicate my circuits.io design: https://circuits.io/circuits/2677013-annoying-circuit.

Above is a short sample program that displays some of the capabilities of this device. It is also the program running in the video shown at the top. The time between each subsequent beep gets progressively smaller, which can get really annoying! You could change the time scale on this sketch by changing INITIAL to something much larger. It's even possible to have this run over the course of a week, getting progressively faster each day!

You could also write a really simple program that just beeps and blinks randomly, or you could have the buzzer play a short tune in time with the LED. The possibilities are endless!

I produced an Autodesk Circuits simulation that allows you to try out your sketch on a virtual circuit without needing to wire a thing. Try it out here: https://circuits.io/circuits/4778452-the-annoy-o-bug-a-chirping-light-up-throwie/.

You can program your ATtiny using an Arduino Uno (or practically any ATmega-based device) and a 10uF capacitor. Instructions can be found here: https://www.hackster.io/arjun/programming-attiny85-with-arduino-uno-afb829.

Just be careful when removing your ATtiny from the DIP socket. It's sometimes helpful to use pliers to pull it out rather than trying to extract it with your fingers.

Placing this device is half the fun. Depending upon where you source your parts these babies can cost you less than $5; it's relatively inexpensive to make many of them. They're small enough to be placed in potted plants, small boxes, pillows, inside lamps, on desks, and anywhere else you can imagine! If you use a watchdog timer to put the ATtiny to sleep this circuit can run for over a year on a coin cell battery.

That's it! If you need any help creating a specific program or assembling the circuit simply comment below. I'll be happy to help.

To see more of my projects check out www.AlexWulff.com and https://www.hackster.io/AlexWulff.

Small Disclaimer: Due to the nature of this project it's possible that some might interpret the sounds it produces as a possible explosive threat. Thus, don't place these in public areas where you might get in trouble!