A flow disruptor and commentary on our society's decreasing privacy and security, even in transition spaces.

A flow disruptor and commentary on our society's decreasing privacy and security, even in transition spaces. 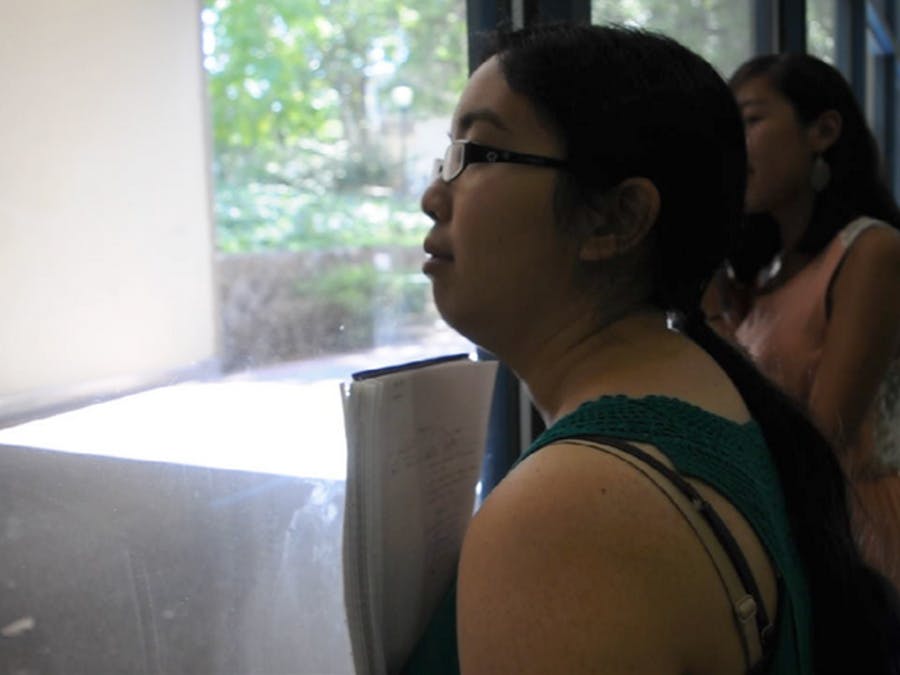 The “Barrows Wind Tunnel” (as christened by Andrea) is an “in-between space” that is used by hundreds of students every day as they walk from or to class and to and from Bancroft. It is characterized by the huge windows on one side and a concrete continuous wall on the other, lack of adequate lighting even during the day, and the total absence of anything interesting for all the people who are walking through it.

Our initial intention with the provocation was to make people interact with the space itself. Our first attempt was to have pedestrians cast a “vote” with their feet and choose between “cats” and “dogs”. But this resulted in more confusion than participation. Our subsequent attempts were intervening with the windows of the tunnel, by trying to implement the “Goldfish effect,” where those inside the tunnel were observed by those in the building. This attempt is a commentary on the increasing lack of privacy that people experience in their day to day - in terms of how technology and corporations can essentially keep watch over anyone at any given time. Even in a tunnel, where movement and activities are relatively limited, people can still be unknowingly observed, and have their personal space infringed, even from afar.

We went through an iterative concept design process, detailed below.  If iterating further in the future, we could give pedestrians more warning of a vote to come to prep them for the task (i.e. by repeatedly taping “vote” starting 10 or 20 yards out from the actual ballot casting, as opposed to right before it).  We could use more formal/official appearing features, such as dressing in lab coats or creating an "observational space" within a corner of Barrows so people within Barrows could also engage with our provocation.

The Barrows Wind Tunnel is on the UC Berkeley campus, approximately a 10-15 walk South from Jacobs Hall, as shown in the map below.

Below is a streamlined path map of our space.  Most people walked along the side of the wall that minimized their total distance travelled - the space was large enough that conventional "walk on the right" traffic rules were not obeyed.

However, not all people followed the shortest path principal of walking.  Those who were on the phone tended to separate themselves physically from the traffic flow and walk along the far wall.  Groups did not change their behavior when walking through the tunnel.  When large vehicles, such as trash trucks and university vans, drove through the space, pedestrians had to pause or step aside for the vehicles to pass (shown below).  The tunnel would temporarily inundate with the dull roar of an engine and a waft of exhaust gas or landfill would fill the tunnel and linger for up to 2 minutes.  Without vehicles, there would be the occasional chatter of a group walking together through the tunnel.

Inside the tunnel, there were benches and elevators situated in a lobby format good for waiting, chatting, and observing.  During our multiple observations of the space, our team got a general "desolate" feeling from the tunnel.  After dark, the white lights made the space feel "eerie," especially because the wind naturally picks up as one walks through the tunnel.  During the day, there was an "open" and "unrestricted" feel to the wind tunnel.

For our interventions, we wanted to maintain the vast tunnel space by introducing as few intrusive physical objects as we could, so people's behaviors were altered more implicitly by us creating more attention and awareness.

We had a few constraints to intervening with the floor - there is routine university vehicle traffic through the tunnel, so we couldn’t have objects that physically came off the floor. So we decided to tape a simple poll to the ground with the intention of allowing pedestrians to cast a vote by walking through either half of the tunnel.  At the entrance of the tunnel, we instructed walkers to “vote” and our particular experiment had cats and dogs as the two options. We toyed around with the idea of incorporating more political messages or underlying social messages, like using Trump vs Palin or simply writing “black” “white” as the options.

We shifted the focus of our second intervention to the tunnel windows, where we could easily observe people. We tried to create an effect that “Big Brother is watching” as a social commentary of how our technologies and our policies are increasingly invasive of people’s privacy. Even when people are minding their own business walking through a tunnel, they are still being observed and judged, as if they were goldfish being viewed in a goldfish tank.

Instead of passively observing our pedestrians, we next attempted to engage their emotions and actions on a higher level by making a silent plea for help from behind the window. We tried to explicitly catch their attention and create engagement even from behind a barrier. This provocation was representative of our society’s communication from behind technological barriers, like Facebook, where we present ourselves in a new light and expect people to engage with us without being face-to-face.

As a final intervention, we reduced the required engagement level for the pedestrians by creating a more light-hearted provocation simply to gauge how many pedestrians would become cognizant of activity occurring within Barrows Hall when directed at them. This intervention sparked quite a few engagements or people smiling and waving back, but a fair few paid no attention to the intervention. We held this intervention to test how wary people are of their surroundings in their day to day, or whether technology absorbs them to the point that they pay little attention to what is going on around them.