Need a quick way to monitor the soil moisture level of your favorite fern? Look no further. We have the answer.

Need a quick way to monitor the soil moisture level of your favorite fern? Look no further. We have the answer. 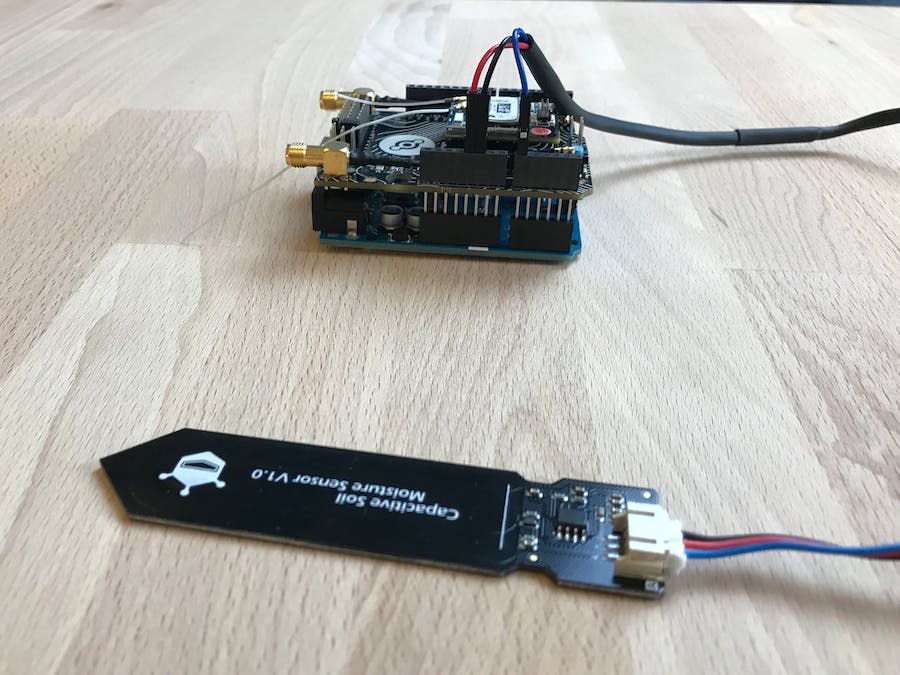 Give Your Plants a Voice with a Wireless Soil Moisture Sensor

Before my owner installed this wireless soil moisture probe, things were dicey. I would go for days, parched, hoping for some relief, with no way to make my situation known. Now there's never any question. When I'm running low, there is data to back it up and my owners can take quick action to keep me hydrated and thriving. - Anonymous Fern

Let's face it. Plants die all the time from lack of watering. You're busy and those ferns aren't going to raise their hands when feeling parched. So, for the plant enthusiast on the go, this prototype soil moisture probe is your ticket to happy and healthy ferns and ficus.

End to end this entire guide should take you about 60 minutes. Here's what we'll be going over:

Alright. Let's get to it. We have ferns to save.

First we need to build the sensing unit. This is quick and easy. When you're done, your complete probe should look like this:

Close up of soil moisture probe connector wired into the Helium Arduino Adapter.

Now it's time to build your very own Helium Network. This is takes about 30 seconds. (If you want to know more about how an end to end application is constructed on Helium and how we handle the wireless networking component, start with this architecture overview.)

To deploy the Element and create network coverage for your Atom-based sensor(s), simply plug it into power and a live Ethernet port using the cords provided. (Note: If you have a Cellular-backed Element, using the Ethernet connectivity is optional but is recommended as a backup.) Once plugged in, you'll see some LED activity. Your Element will be connected when the front-facing LED turns green (signaling Ethernet connectivity) or teal (for Cellular connectivity). You can watch a short video on the Element and how to connect it here.

Registering your Helium Element and Atom in Helium Dashboard

Now that our sensing unit is built and your Helium network is deployed, it's time to register your hardware in the Helium Dashboard. Dashboard is Helium's hosted user interface for monitoring and managing connected hardware deployments. All hardware that Helium ships is already registered in our system but we need to know who is deploying it.

You can verify your Element is online by looking at it Status & Signal in Dashboard:

Verifying your Element is online

A major feature of the Helium Platform is Channels. These are prebuilt connectors to web services (like AWS IoT, Google Cloud IoT, and Azure IoT) and protocols (like MQTT and HTTP). With Channels, Helium has done all the heavy lifting for you when it comes to integrating with one of these web services or protocols. For Fern Saver, our Soil Moisture Probe, let's spin up an HTTP Channel. This will let us pipe data to any web service that accepts data over HTTP. For example, you could use an HTTP Channel send this data to IFTTT and, in turn, receive a text every time Fern Saver reports moisture below a certain level.

In this example, we'll set up an HTTP Channel that sends data to requestb.in, a handy, free web service for testing HTTP services. Note that below, when we upload the Sketch to the Arduino, we'll be referencing this Channel name, HTTP, in the code so we know where to send the data.

Here's how quick and easy it is to set up this Channel:

Creating your HTTP Channel in Dashboard

Configuring your Arduino IDE and Uploading the Sketch

We can now move onto configuring your Arduino IDE and importing the required libraries. To get started:

Once this is done, it's time to do some actual Arduino programming. The full source for the Sketch we'll be uploading can be found here on GitHub. The following is the complete Soil_Humidity.ino sketch.

With the Helium and ArduinoJson libraries installed, create a new sketch (File -> New from within the Arduino IDE), and paste in the above code. Then, with your complete soil moisture probe hardware package connected to your workstation via a USB cable, hit the Upload button.

The LEDs on your Atom Prototyping Module should begin blinking after a few moments. This is the Atom connecting to the Helium network (via the Element we deployed earlier). If the Arduino IDE does not throw any errors when uploading the code, this was successful and the soil moisture probe is now generating readings.

A Note on the Soil Moisture Data

As noted above, this Sketch will capture soil moisture data and encode it as JSON before sending to the Helium platform. Using the above Sketch, one data point will look something like this (as JSON):

It's worth noting that the DFRobot Gravity Capacitive Soil Moisture Sensor is actually capturing these readings as analog readings between a calibrated dry and wet reading. You can get full details on how this is implemented and calibrated here. You might want to tweak the calibration a bit.

Now that your sensor is deployed, we can verify that it's online and transmitting data. Within Dashboard we can do this in a few ways, both via the Atom UI view for the sensor you've just deployed.

Next Steps and Help

Congratulations! That's the end of this guide. You've now future-proofed your fern with a wireless soil moisture probe. This is a big deal. Your ferns thank you.

This is not a fern but you get the idea.

If you want to learn more about Helium and how you can prototype your own sensors using this hardware and software, start here: