A sensor that detects how many people walk in or out of a class room as well as temperature.

A sensor that detects how many people walk in or out of a class room as well as temperature. 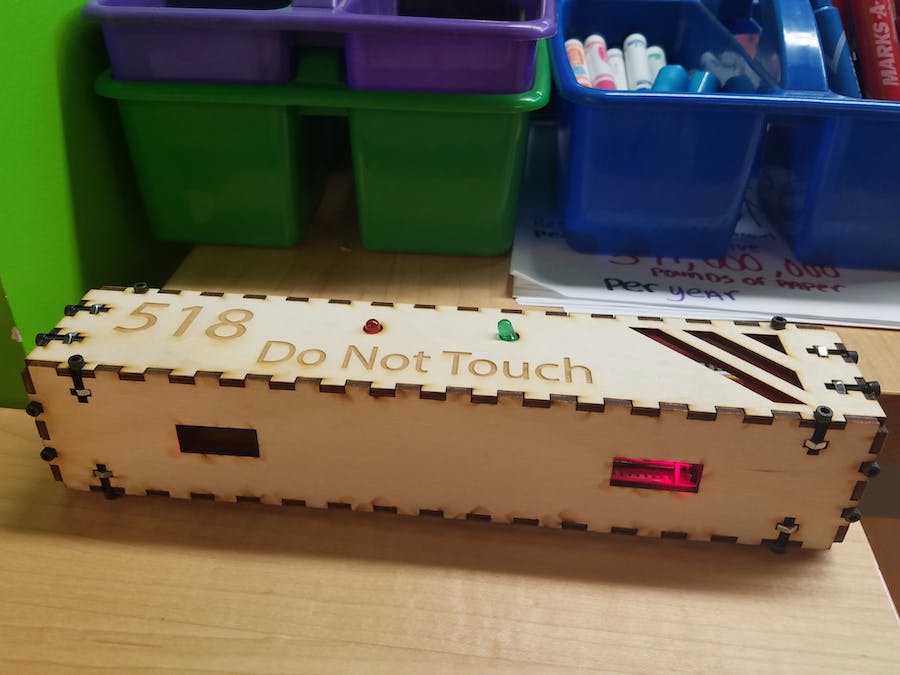 1 / 2 • The finished product. This mote detects the lasers as well as housing the photon.

Through our Physical Computing Lab and Innovation and Creation Lab classes we were tasked to create a sensor and the enclosure around it in order to gather data around the school that could be implemented in one way or another.

After a week of brainstorming we were able to come up with a simple concept, "How often do students leave or arrive late to a class depending on the subject and difficulty of the class?" We spent several days trying to determine what sensors to use to answer this question finally deciding on a break beam laser. We also wanted to add temperature to add different pieces of data that we could connect to our idea. For example, if the room is hotter, do more people leave in the middle of class.

We chose to deploy our mote in a room that had both difficult and less rigorous classes. This room had a college level physics class, but also had classes that were more laid back elective, according to many students. Our hypothesis was that more students would leave the "easier" class because they won't have to worry as much about missing out important information.

Creation of our "Mote":

Prior to creating our final device, we prototyped with a breadboard to make sure everything worked. We also created the enclosure with cardboard before the laser cutting, but we ended up changing the design before that. Our mote consisted of a two piece system. One to store the lasers, and the other to store the Photon and it's components. In the mote with the Photon, we created our own PCB so that we could save space by using something smaller than a breadboard.

1 / 6 • The enclosure prototyped in cardboard.

The mote that held our Photon had holes for the lasers to hit the photo resistors through, as well as a hole for our temperature sensor to be exposed to the outside for an accurate temperature and humidity reading. We used wood in order to keep the inside of the mote dark because our project depended on the inside of the enclosure being dark, so clear or diffused acrylic would not have worked.

1 / 4 • Creating and testing our functional prototype.

Our code was mainly focused around reading light values and pushing to Phant, an online data stream. When a certain event was triggered, in our case the photo resistor value going under a certain amount, it would create a line of data in Phant. When debugging, we had trouble with logic errors a few time. For example, figuring out why our data wasn't posting to Phant, or why our lines of data would give us the wrong class period during a certain time. We caught these mistakes though and fixed them early.

Our team faced a few challenges that we had to overcome throughout the duration of this project. One of the first challenges that arose was trying to figure out the best way to detect movement in and out of a classroom. We saw a few sensors that might have worked, but in the end, we decided to create our own with photo resistors and lasers because it fit our requirements the best.

Another problem we faced was following deployment. Our sensors had to be aligned very specifically, so that the laser was always hitting the photo resistor on the other side of the door. However, the command strips that we used to not damage the wall weren't the best mounting solution for our project, since our node with the lasers would still slightly droop sometimes. This caused some errors in our data that we will have to find and take out.

The location where we deployed. The sensor was placed on the walls opposite of each other.

If we were to do this project again, we would try to create some safety measures in order to prevent the unnecessary data that we had. For example, we could use the command strips to connect L-Brackets to the wall, and this would prevent the motes from drooping. Another safety measure we could take would be to use some sort of light diffuser so that the photo resistor can still get a lot of light without having the laser always directly shining onto it.

We learned a few things throughout the duration of the project. One of the biggest things we learned was how to use the Particle Photon to collect data, which we could later use and analyze to understand a particular phenomenon. We also learned how to use a PCB to create our own circuits rather than using a breadboard.

Data analysis was also a large portion of what we learned. It was something that no one in our group has really done before, so trying to figure out the best way to show our data in a visual way was definitely something new to all of us. We believe this will be very useful in the future.

We learned that our hypothesis was incorrect since there were a similar amount of people leaving during both Engineering Design and Physics C. There was no distinct evidence that more people were leaving the "easier" class, therefore disproving our hypothesis.