The 4Duino DJ Mixer is similar to a keyboard MIDI Controller that has the ability to play sample beats and songs.

The 4Duino DJ Mixer is similar to a keyboard MIDI Controller that has the ability to play sample beats and songs. 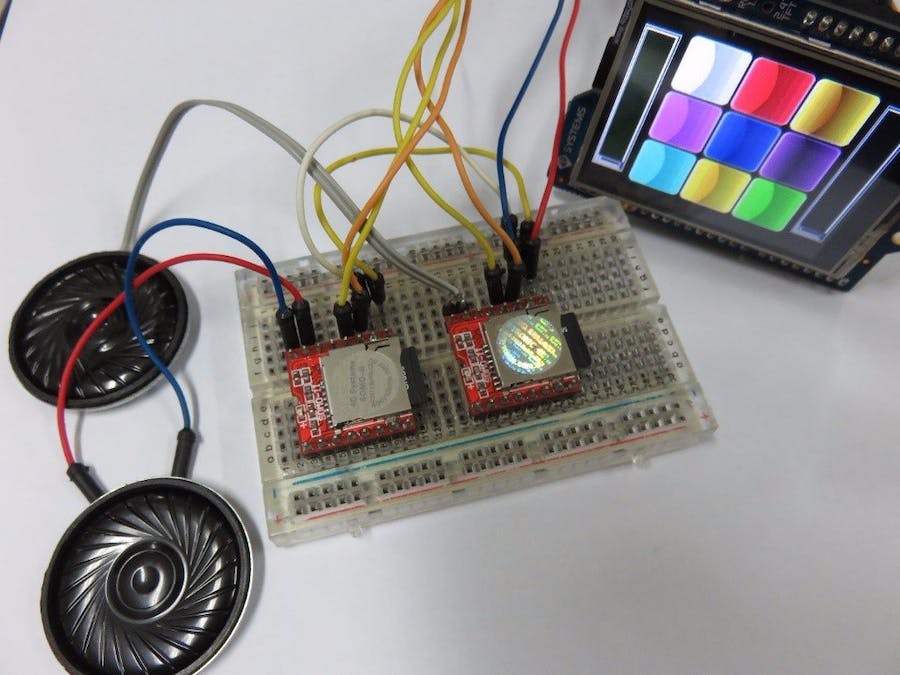 Before, DJ and music artists needed to use computers, recording, and playback devices before they could mix and play their own customized music. But using this project, the user can utilize the 4Duino LCD screens and the 4D SOMO-II music module.

The SOMO-II is a simple and easy-to-use audio module that only needs a speaker to function, it can play .wav and .mp3 audio files that are accessed through microSD card or USB devices. UART is used to communicate with the SOMO-II module with any other host by using serial byte commands.

Build the circuit as shown in the following diagram and schematic.

Workshop 4 – 4Duino Extended Graphics environment is used to program this project. (The same could be implemented in the latest Arduino IDE)

Connect the 4Duino to the PC using µUSB cable.

Then navigate to the Comms tab and select the Comms port to which the 4Duino connected.

Finally, go back to “Home” tab and now click on the “Comp’nLoad” button.

The Workshop 4 IDE will prompt you to insert a µSD card to the PC in order to save the widget images. Insert µSD card, select the appropriate drive and press button “OK”.

If the µSD card has the widget images you can click button “No Thanks”.

After uploading the program in to the 4Duino, it will try to mount the µSD card. If the µSD card is not present it will print an error message.

All you need to do is insert the µSD card you saved the image files into the 4Duino.

Working setup of the DJ Mixer, two software serials were used in this setup to transmit data commands to each of the SOMO-II, therefore, One SOMO-II will play the note that each SOMO-II module has their own microSD card with the saved song files, the SOMO-II implements a file-naming of the song tracks saved inside the microSD card. For more information on that topic, please view the SOMO-II datasheet that can be downloaded here.

In the GUI, the slider at the left side is for the volume of the SONG buttons. The opposite slider is for the volume of the BEAT buttons. The SONG Buttons are the White, Purple and Aqua colored buttons, which are arranged in column one. The BEAT Buttons are the Red, Blue, Yellow, Gold, Violet and Lime colored buttons arranged in column two and column three.

The BEAT Buttons plays beat music files once the button is pressed and stops when released. The SONG Buttons on the other hand plays continuously and stops when pressed again. While a SONG is playing, users can mix them up by playing different beats to match and mash the song up.

124 projects • 174 followers
4D Makers is a group of curious engineers and enthusiasts who finds great satisfaction in creating and building anything from electronics.
ContactContact