Augmenting the Arduino101 BLE Rover with sensors for autonomous driving.

Augmenting the Arduino101 BLE Rover with sensors for autonomous driving. 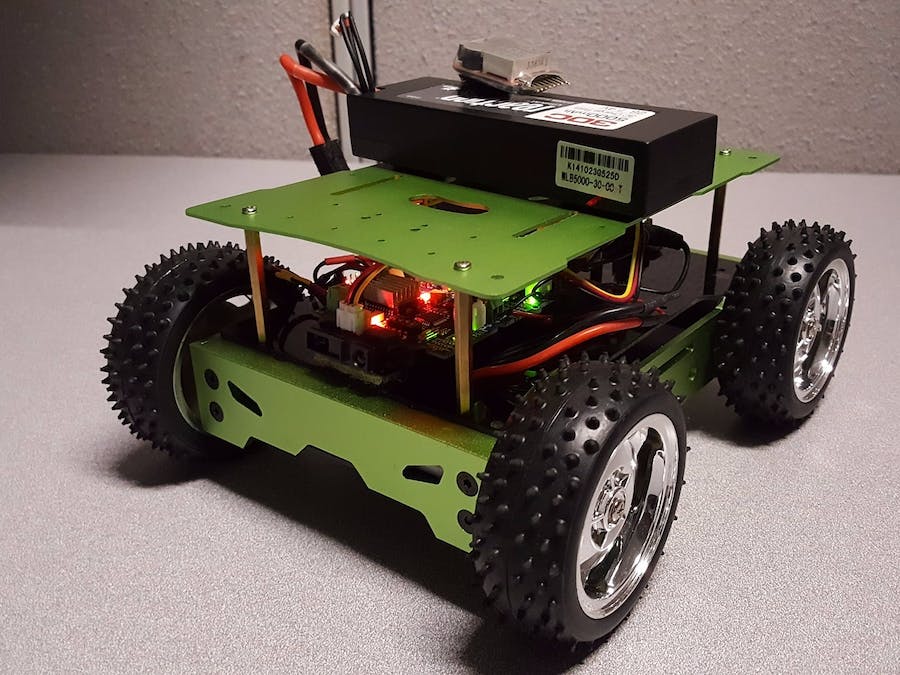 This project is an extension of the Arudino101 BLE Rover, where I had supplied some Seeedstudio Skeleton Bot 4WD mobile robotic platform kits to a team conducting a Maker experience for Oakland, CA High School students. The intent of this tutorial is to show how by adding sensors you can create a platform to explore how to program an autonomous self driving vehicle.

The high level sections for this tutorial are:

This project is based on the Arduino 101 BLE rover, so you can review the Assemble the Rover and Electrical Assembly Steps. I have added detailed directions, as I have changed the orientation of the Arduino101 mount point, and use a second motor controller to reduce likely hood of loose wires after collisions.

Wire power cables – Wire the power cables to the motor controllers (red is positive, black is negative). Make sure to tighten all terminals to prevent wires from disconnecting (see figure 5).

Installing the wheels – Install the 4 wheels onto the drive shafts (see figure 9).

You'll need the Arduino IDE installed on your computer, with the Intel Curie Core (see Arduino 101 getting started.) If you are new to Arduino, it’s a good idea to run in the Arduino IDE File -> Examples -> 01.Basics -> Blink to verify that everything is working. The blinking on board LED can be seen from the side of the rover under the Grove Shield. Once that is verified you can load the code, which is in the project code section.

However, the first major extension that I added was to process the whole UART transmitted string instead just the first character. This allows the commands between the rover and the BLE mobile device to be more human readable. For example, “a” go forward became: “Auto:Up” and “b” turn left became: “Auto:Left”.

This also means that the BLE Mobile control interface using nRF toolbox UART needs to send different strings than that of the original project, which used single characters for movement. In this project:

You can configure nRF toolbox to act as a mobile BLE interface, by following these steps:

1. Install nRF Toolbox for your mobile device in either the iOS or Android app store.

2. Launch the nRF Toolbox on your mobile device.

3. Select the UART icon. There are nine user definable buttons in a 3x3 grid. If this is the first time, the default layout is called UART and blank.

4. Press the ‘EDIT’ button in the upper right corner.

The grid color will turn orange indicating it is in ‘Edit’ model. Touching an individual button in the grid brings up a setup screen where you can pick an icon for that button, and enter the appropriate string. Do this for all 5 rover commands. You can save this to another name (see figures 10-12).

7. Select the BLE name from your Arduino sketch, 4WDUART for example.

8. Press the defined buttons to move the rover.

If the motors do not turn at all, the I2C Grove Motor Drivers my need to be reset via a small button on the board (see figure 13).

To verify that the wiring was done correctly, sample code for the motor drivers can be used. Please reference the Testing Motor Control step of Arduino101 BLE Rover project this is based on for more details.

I added a Grove 80cm Infrared Proximity Sensor to the front of the rover to detect oncoming obstacles. It is attached to the Grove shield at port A0 by a Grove cable. By using the code snippet on the sensor’s wiki, I found that I could detect obstacles with enough time to react when the analog voltage was >1. With the second major extension of the base rover code, I added support for an autonomous mode, where when the UART sends a string “Auto:Auto” the rover drives forward until an obstacle is detected, and then the rover will alternate turning left and right for avoidance.

To modify the nRF Toolbox to support the autonomous mode, follow these steps:

1. Launch the nRF Toolbox on your mobile device.

3. Press the ‘EDIT’ button in the upper right corner. The grid color will turn orange indicating it is in ‘Edit’ model. Touching an individual button in the grid brings up a setup screen where you can pick an icon for that button, and enter the appropriate string. Touch an unused button, and set the icon to play and set the string to “Auto:Auto”.

6. Select the BLE name from your Arduino sketch, 4WDUART for example.

7. Press the defined buttons to move the rover.

This project builds on top of the original Arduino101 BLE rover by using sensors to create a platform where developers can try their hands at programming an autonomous vehicle. Things to explore further on the rover code are: more sophisticated obstacle avoidance, multiple proximity sensors to allow the rover to detect and react to different types of collisions, different types of sensors to optimize for lighting conditions. Things to explore further on the BLE device are: interfaces beyond the simple digital 3x3 button grid like an analog joystick, or steering wheel and an accelerator pedal, and controlling multiple rovers from the same BLE central device at the same time. Things to explore further on use cases are: real world implementation of a go-cart video game with sensors detecting powers ups, robotics challenges like line following. 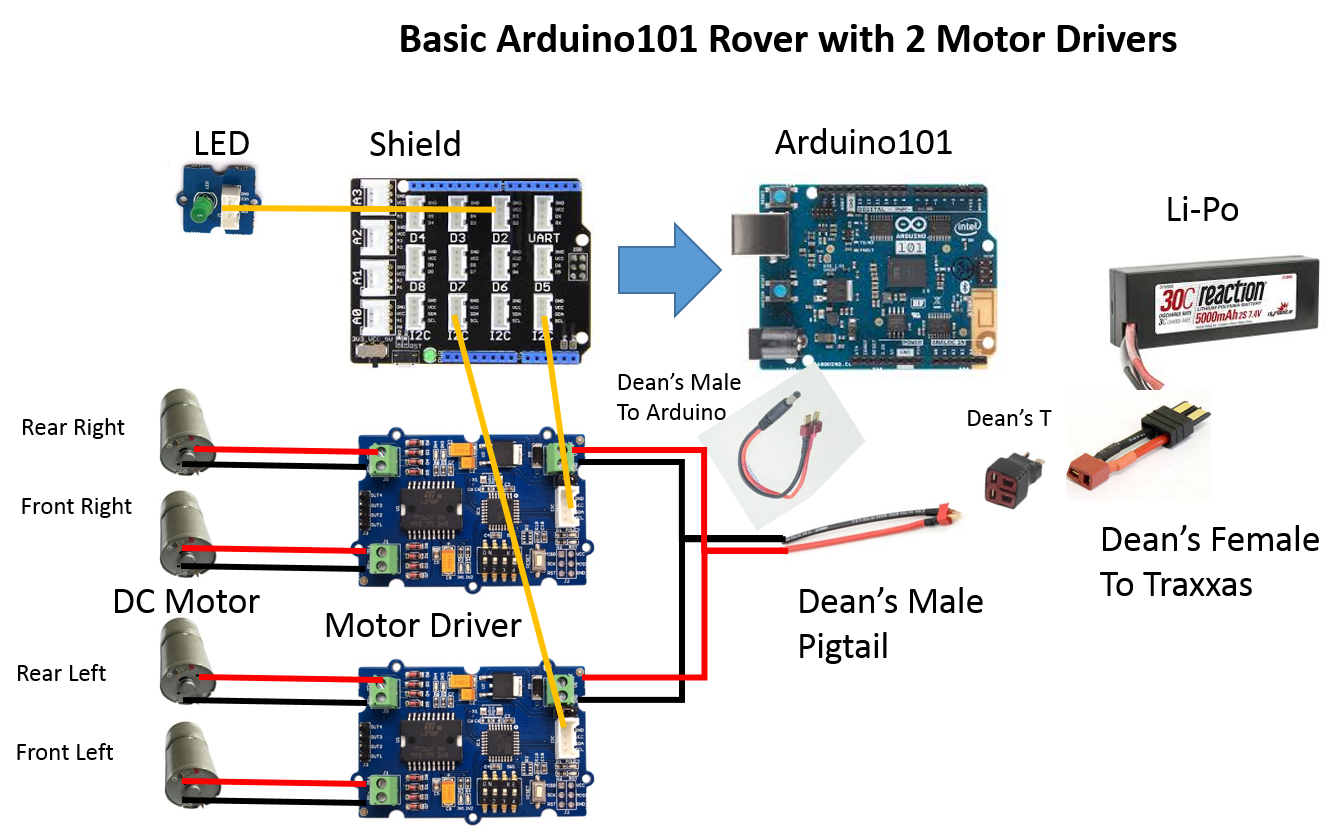 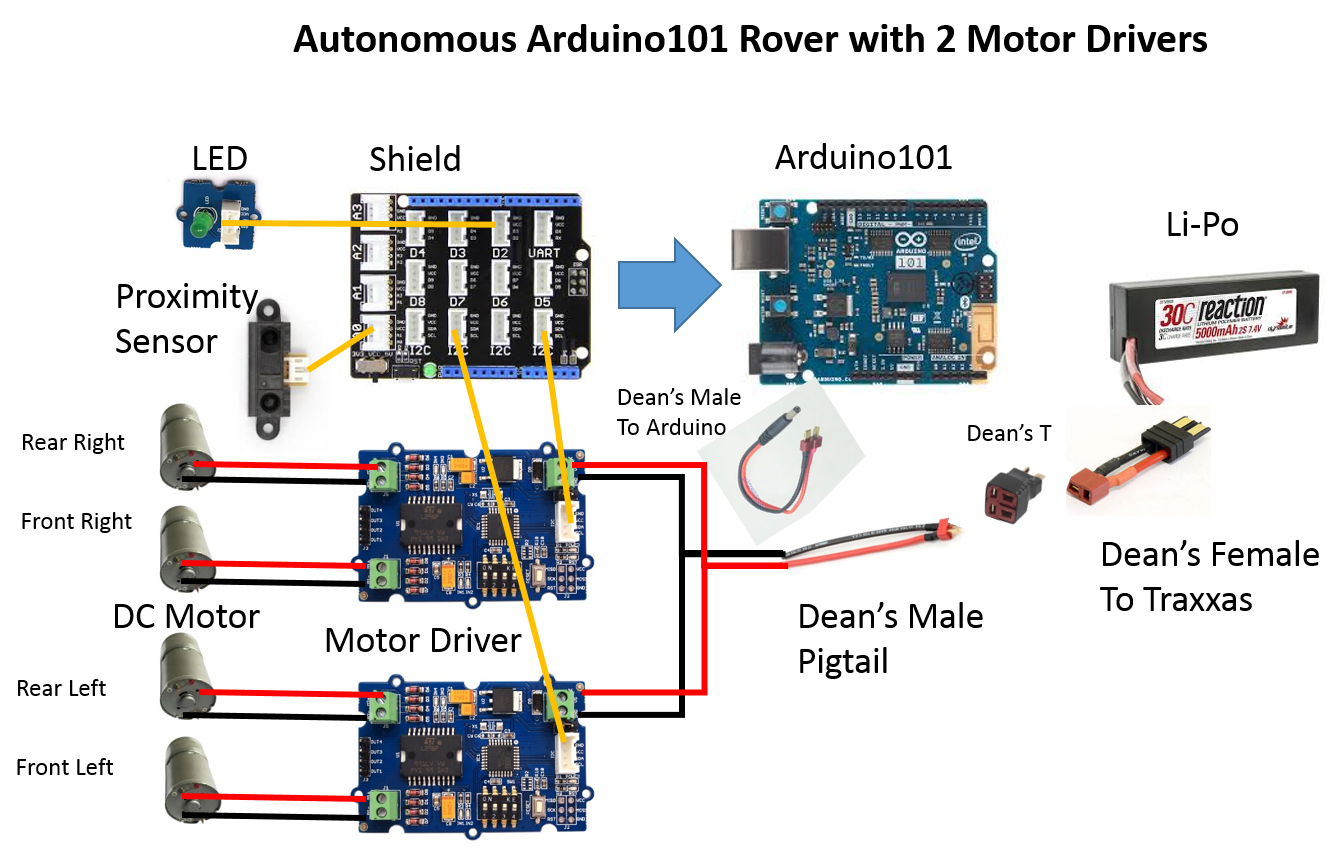