Combining a laptop from the grave with a newer desktop graphics card, a true hardware Halloween.

Combining a laptop from the grave with a newer desktop graphics card, a true hardware Halloween. 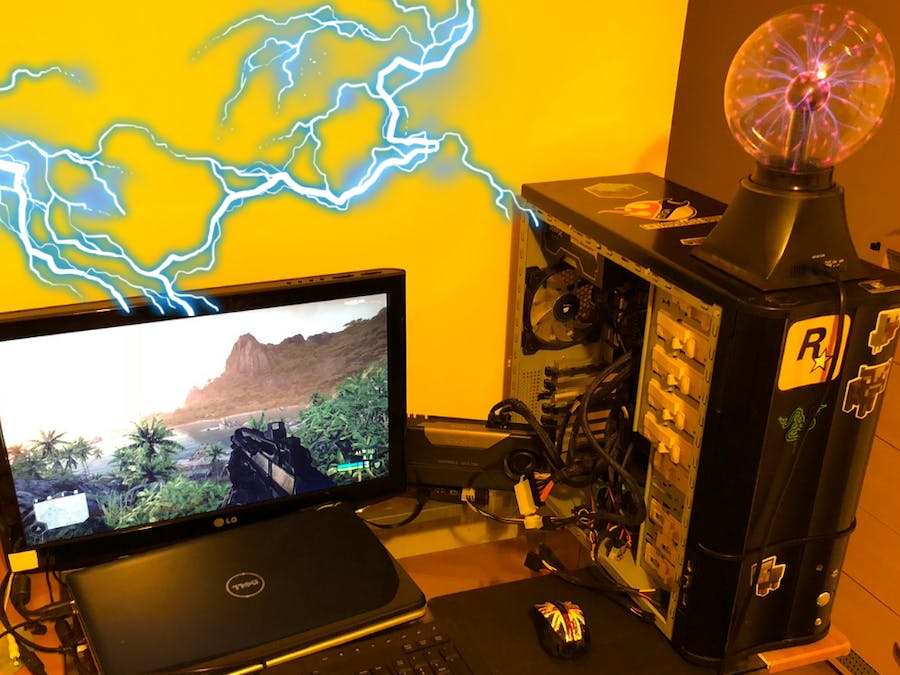 Thanks to Banggood for this project! They contacted me a while back about doing another project after the Holo Cube, so I had a look through their site and found this Mini PCI-E to PCI-E adaptor and thought about combining it with one of my old laptops I have laying around to put a newer graphics card in it and see if it can, what else; run Crysis.

After days and nights of incredible labour and fatigue.

So originally I wanted to use an old netbook from 2011 – an Acer Aspire D255 with a GTX 1080 but I ran into problems, it turns out some motherboards of some laptops do not allow this kind of connection and so it was just preventing the machine from even POSTing.

So I moved on to using a Dell Inspiron 15 from 2009 only to then find it booted – but the card wasn’t working; which I found to be an incompatibility between Pascal cards and the adaptor. So I installed an old GTX 760 I have laying around and that finally got it to work.

As you can see the laptop is rather old and beat-up, like it was just removed from a PC graveyard:

As seen in the video above it’s not too hard to connect up; just a case of removing the back panel and a few other things from the laptop and then plugging in the mini PCI-E end and plugging the HDMI side of that into the base.

I got another PC I have about to use as a power source and plugged in the ATX Power and the CPU power supply into the connector for the PCI-E base. Then wired in the graphics card extra power cables.

I got an old keyboard and a spare mouse plugged into the laptop and prepared to bring it to life.

Booting up the laptop I had pre-installed with Windows 10 Pro x64 fully up to date, I had an old TV plugged in and ready with the card. It successfully displayed windows across the two screens and I was able to install nVidia drivers.

I then had to ensure that the TV was the main display so that launching any 3D applications would be driven by the GTX 760 and not the iGPU in the laptop.

At this point I was ready to play some Crysis.

What may not be expected.

As you can see from above, it runs fairly… ok? For the age and build of the laptop, it runs on Very High settings but the frame-rate easily tanks into the single digits when a lot of physics comes into play, such as when I crash the vehicle into the building, causing it to collapse.

So while technically playable – it won’t be exactly enjoyable, especially if you are used to higher FPS. Although Crysis does seem to handle FPS in the teens better than most games.

I imagine with the later levels it would become very tough to play, especially with the large tank battlefields mid-game.

So pairing up this adaptor with a laptop that has a beefier CPU in such as a Core i5 class CPU or something would yield better results and smoother game-play for sure, or even pairing with a GTX 980 Ti; which I believe is the latest card that can run on the adaptor.

The form of the monster.

The setup is a little bit messy here, but if you had a PSU separate from a case and had that plugged in with a nice monitor, alongside a laptop with a beefy CPU and RAM (but lacking a decent GPU) then it could be cost effective to buy one of these adaptors and actually get a proper discrete GPU with your setup.

The main thing to note would be the compatibility with the motherboard, the graphics card and the fact you will lose native wireless on the laptop.

And here are some more pictures of the adaptor itself:

Who shall conceive the horrors.

Overall this is a fun little project, although it had it’s frustrations trying to run it with certain bits of hardware. The adaptor itself is well made and works surprisingly easily for what it’s actually doing; I thought there would be more tweaking needed at a lower level for sure, but it’s (almost) plug-and-play.

Let me know what you thought of the project – I know it has been done before, but I really wanted to pair a relatively decent graphics card with an outdated and under powered laptop to see what the combination would be like.

Make sure to like and subscribe on the video if you liked it and also keep with my blog here or on my Hackster/Electromaker profiles for more tech projects/experiments in future!

38 projects • 113 followers
I like to keep fit, explore and of course make projects. https://314reactor.com/
ContactContact