Inspired by the Biometric ID gun from Skyfall, this will check that I am the one using the Nerf Gun by using fingerprint technology.

Inspired by the Biometric ID gun from Skyfall, this will check that I am the one using the Nerf Gun by using fingerprint technology. 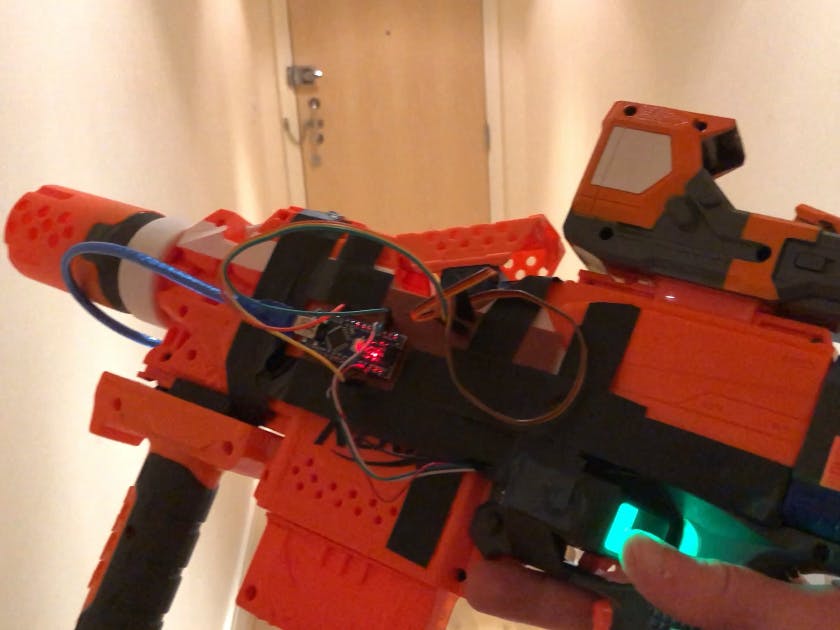 First up the parts for this project were supplied by DFRobot! They contacted me a few weeks back and asked if I had any ideas for a project and I thought a cool one to do would be a biometric fingerprint ID locking Nerf Gun; inspired by the gun in Skyfall.

So thank you DFRobot! Make sure you check them out for your project needs.

I sent DFRobot a little shopping list and they kindly sent me the following:

With additional parts from my stuff I have around:

This guy is cooler than my fridge.

My initial plans were to have the Arduino on the side with the power-pack and have the fingerprint ID scanner on the left side of the gun so that it can read the thumb print – with a servo implanted within the inner workings of the gun that will essentially jam it from firing until it is moved.

While looking over the workings of the Nerf N-Strike I realised there are a number of safeties built in, one in the mag-well for detecting a magazine and one on the top for detecting the closing of the little door. I figured I could use the servo to spin around and click in the trap door safety at the top when my thumb is identified; allowing the weapon to fire – and then spinning away from it when my thumb is not identified, stopping it from firing.

You can see the little black safety button in the pictures below – and how the servo is positioned to actuate it.

The first place I went was Hackster for a rather handy tutorial on wiring up the fingerprint scanner to the Arduino and also basic use.

I soldered the Arduino to some veroboard similar to my Gravity Gun project and hooked it up according to the instructions above. I then wired in the servo, following the instructions over at… Instructables.

I made sure nothing burnt out and gave the servo a quick test with the code from instructables.

Next up its Arduino IDE time and a nice download of the Adafruit Fingerprint Sensor library.

Within the IDE adding a library is a simple as clicking Sketch > Include Library > Add a.ZIP Library and selecting the downloaded zip from github above.

Once here, with the Arduino plugged into the PC with the IDE on via USB – setting up a fingerprint is easy – File > Examples > Adafruit Fingerprint Scanner Library > enroll.

When the code is loaded up hit CTRL + U and it should compile and send off to the Nano, at this point the console needs to be loaded up Tools > Serial Monitor; set the rate to 9600 and when the Arduino reboots it should provide instructions for adding a fingerprint with an ID – in this case I went for #1.

I pretty much strapped the Nano and the Power-bank on with electrical tape, as well as some Sugru to hold the servo and fingerprint reader in place.

See instructions above for uploading to the Arduino board.

As usual I went about making a YouTube video to demonstrate the device in action!

It works pretty well – can be a bit tricky to position the thumb sometimes, but generally it works and will prevent the gun from firing Nerf rounds if no fingerprint/the wrong fingerprint is present.

And of course some photos of me goofing about with it:

I think I could wire in the Arduino more directly into the safety mechanisms of the Nerf Gun, but in this case DFRobot had sent me the servo so I wanted to make sure it got used in the project.

The build quality is the usual 314reactor speciality – but its functional!

Let me know if you liked it, if you disliked it – or any improvements!

As for future projects – I think its time I went over some Bond films for more gadget inspiration.