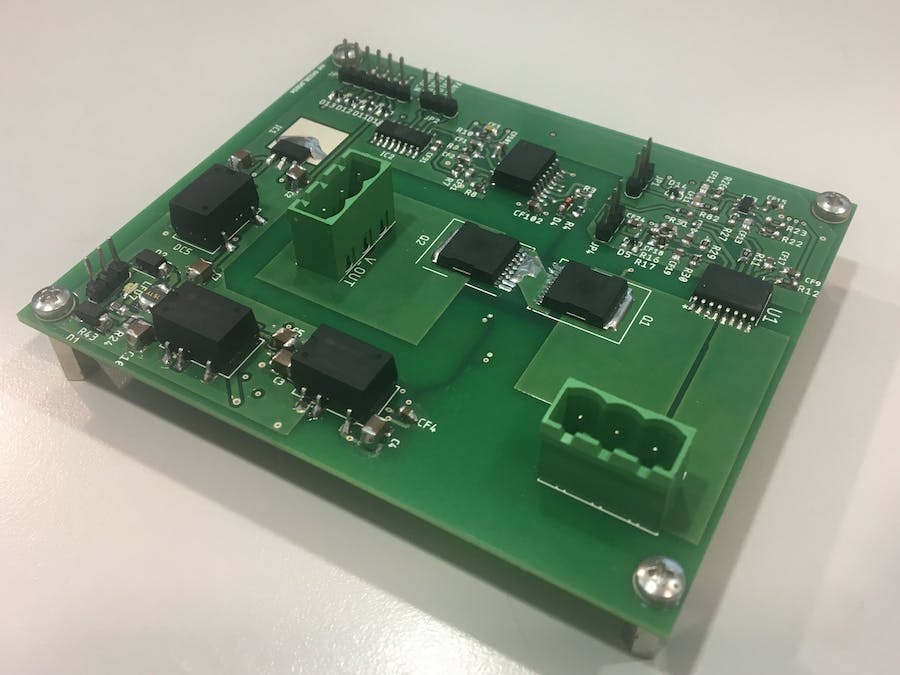 Different loads behave differently when connected to the AC mains. Traditional electromechanical relays/contactors employed in industry and automation are not capable of synchronizing with the grid electrical quantities when making or breaking connection. As a result, arcing and/or overcurrent occurs, reducing the lifetime of relay contacts and stressing unnecessarily the commutated load.

This project consists in the design of a bipolar intelligent power Solid State Relay (SSR), capable of commutating different loads (resistive, inductive or capacitive) without introducing overcurrents during the turn-on phase and avoiding voltage spikes during the turn-off phase. Bipolar topology allows to completely insulate the load from the AC source.

When the load is predominantly of capacitive type, the turn-on commutation is performed at the zero-crossing of the input voltage sine wave. This allows to greatly reduce the inrush current.

When the load is predominantly of inductive type, the turn-on is performed at the peak of the input voltage sine wave, in order to avoid core saturation an then reduce inrush current when driving e.g. large transformers.

During turn-off, in boh cases, the commutation occurs on current zero crossing, in order to avoid voltage spikes caused by the stray inductance of the power line.

The following figure shows the functional scheme. The AC grid is directly connected at the input of the SSR. The system consists of two main PCB: the SSR board and the Nucleo-64 logic unit board.

The logic unit is implemented by the development board Nucleo-64. The sensing of input voltage/current and the generation of the gate signals is performed by the on board microcontroller STM32F446.

The GPIO and all peripherals were configured using STM32CubeMX tool.

The following figure shows the control system flowchart implemented by the code.

Start: in this state the code is initialized. All microcontroller peripherals are properly configurated. This state is invoked at the power-on and every time the reset button is pressed.

1) Self-diagnosis of undervoltage lockout and overcurrent fault implemented by the opto gate drivers. The microcontroller monitors the predefined GPIO where the faults are reported. The fault event is managed by an interrupt service routine.

The SSR was tested in Inductive Mode and Capacitive Mode.

Legend of the oscilloscope captures:

Preliminary tests were conducted on a purely resistive load, in order to validate the different load commutation strategies implemented.

The following capture shows the SSR turn-on at the peak of the input voltage, when Inductive Mode is selected.

The following capture shows the SSR turn-on at the zero-crossing of the input voltage, when Capacitive Mode is selected.

The following capture shows the SSR turn-off at the zero-crossing of the input current.

2 projects • 2 followers
I'm Mechatronic Engineering, PhD Student at the University of Modena and Reggio Emilia, Department of science and methods for engineering.
ContactContact