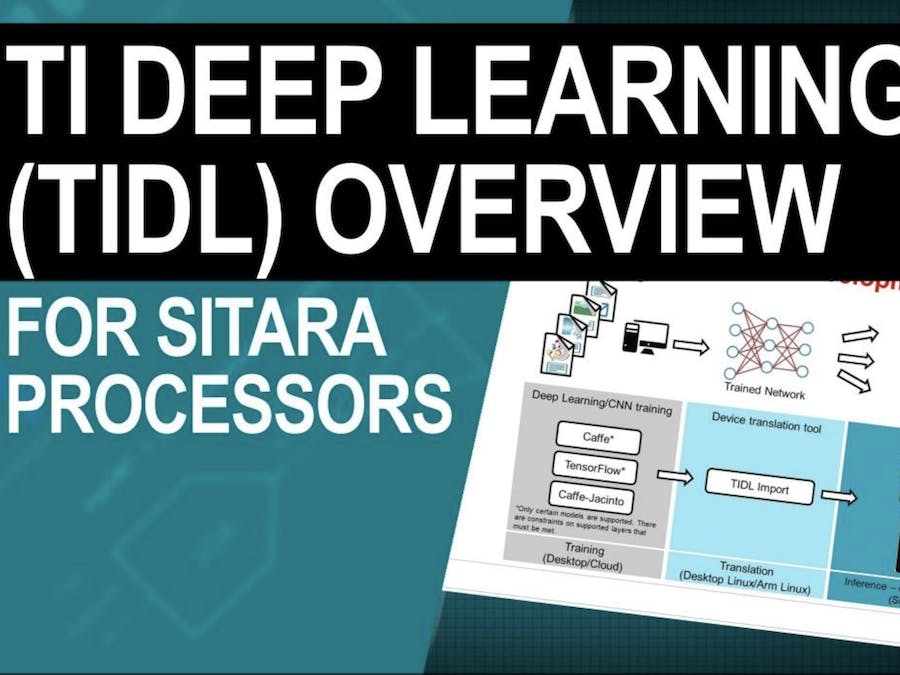 This project will document getting started with the Texas Instruments Deep Learning (TIDL) library on BeagleBone AI. For these examples, we'll be using pre-trained models with live data streams from a web camera captured by mjpg-streamer for network-based development (rather than desktop keyboard-monitor-and-mouse development common on non-embedded platforms).

The repository of examples is at https://github.com/beagleboard/cloud9-examples under the BeagleBone/AI/tidl folder. The Classification example is largely completed and the Segmentation example is under development. You'll also see a 'dummy' example that simply provides a live video stream without any processing.

Upgrade the software libraries on your BeagleBone AI

Visit https://beagleboard.org/upgrade for instructions to:

Make sure the TIDL library and examples are installed

Try out the classification example

Stopping the demo can be done by clicking the "Stop" button in the "Run Configuration" window.

More examples are being created now.

Debian, not Processor SDK or Yocto

The TIDL API library and examples are published and included in TI's Processor SDK, which is essentially a different Linux distribution provided by TI. The BeagleBoard.org provided Debian distribution integrates these same components.

The TIDL API documentation will make numerous references to the Processor SDK and occasional mentions of components like "Matrix" that are not part of our implementation. However, all the parts about the TIDL itself and the components it utilizes, like OpenCL, are still completely accurate as TIDL is integrated into the BeagleBoard.org Debian images.

Many of the integrated components can be found in Robert Nelson's repository of customized Debian packages at:

Getting rid of the monitor and streaming video via the browser

A fork of mjpg-streamer added support for OpenCV-based plugins via C/C++ or Python. This made it easy to not rely on having a local monitor displaying video data often used in popular deep learning models. Our goal is to help you make embedded electronics, not a desktop computer, and this development method much better aligns with our network-based running-on-BeagleBone IDE and self-hosted development tools. The TIDL examples that were previously written for OpenCV GUI output are to be re-written for this project as mjpg-streamer filters.

You can still run the OpenCV GUI demos using the keyboard-monitor-and-mouse approach.

Integration into the Cloud9 IDE

The primary integration components into the Cloud9 IDE are the runner and the Makefile. These tie the distribution implementation into something that can be utilized by a click of the "Run" button. A set of typical libraries and an execution model are setup based on the ".tidl" before the ".cpp" in the filename. All projects are assumed to be only a single source file.

Join the community and contribute your own examples

BeagleBoard.org is a collaborative community of Linux, open source and open hardware enthusiasts. We want to see you succeed and be enabled to teach others what you've learned.