Learn how easy it is to control TI RSLK kit over internet and control different motions of robot using Android app.

Learn how easy it is to control TI RSLK kit over internet and control different motions of robot using Android app. 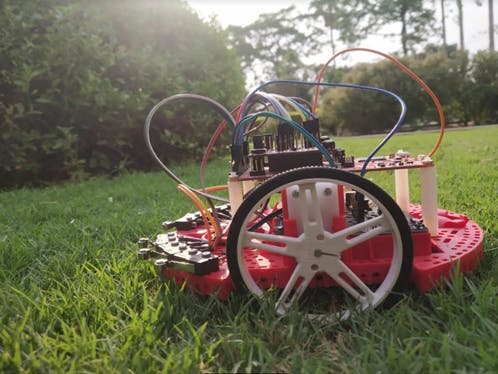 To control the RSLK Kit through Internet using an Android app.

We are controlling a robot car using internet. We have developed a mobile application which sends commands to the server whereas MSP432 LaunchPad and CC3100 Booster Pack receive the commands sent by the mobile application from the server (Database) and the car moves left, right, forward and backward according to the data received from the server. The motion of the robot is controlled as per the Energia code that is loaded onto the launch pad module.

components at glance
variables sent via app to control robo

• It can be controlled from all over the world with strong internet connections.

• Military application usage is one of the key advantages of this robot.

• This basic model can be further constructed and iterated with different additional modules for industrial purposes and applications.

• We can use solar energy panels instead of charging batteries.

• We need to modify robot (i.e. wheels) to operate in various surroundings and situations.

• Wi-Fi range needs to be boosted for controlling the robot efficiently.

38 projects • 44 followers
Working as Director of Innovation Centre at Manav Rachna, India. I am into development for the last 12 years.
ContactContact