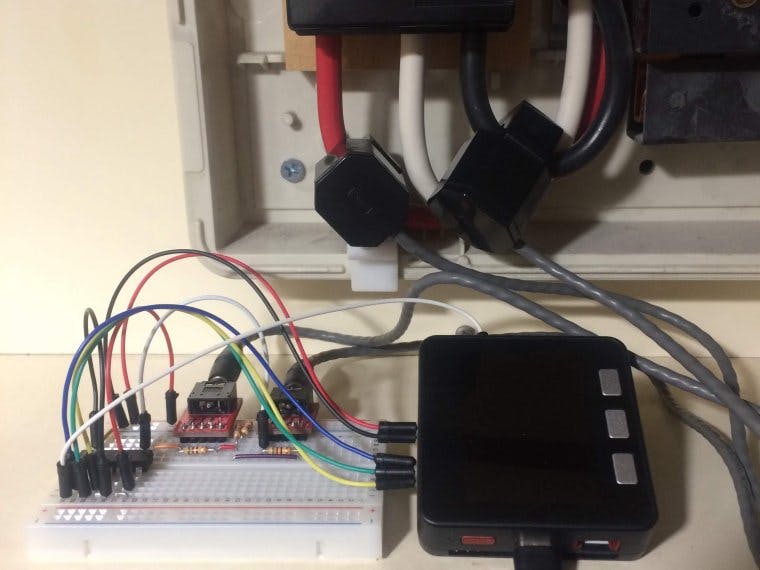 In homes, offices, factories and so on, so many devices are running with electricity. It is effective for energy conservation and cost reduction to measure the state of electricity usage of the equipment, to accumulate data and visualize it. In addition, it can be developed into watching services and services such as improving availability of facilities.

A circuit for measuring current using a clamp type current sensor is as follows.

Connect a load resistor of 51 Ω to the secondary winding of the clamp type current sensor and measure the voltage at both ends with the AD converter MCP 3004. Since the AC is measured, the voltage across the load resistance is positive and negative. We made a half voltage (1.65 V) of the power supply voltage 3.3 V with two 4.7 kΩ resistors so that the voltage changes around 1.65 V as the center.

It is a measuring circuit made on the bread board.

The measurement program is as follows.

The first program will print out the sampled data to see if the sampling of AC is working well.

The part accessing MCP 3004 is made into a library. We put the entire program including the library in Github.

The power supply cable is made of two wires. Even if two wires are clamped, the current of the return and return is canceled, no magnetic flux is generated, and the secondary current does not flow. As shown in the photograph, we measure with just one of the two wires.

Build the program and transfer it to M5Stack and start the serial plotter instead of the usual serial monitor.

Connect the appropriate electrical products to the end of the power cable. In the experiment I connected a 1200 W dryer. When moving or stopping the dryer, the following waveform is drawn on the serial plotter. The waveform varies depending on the connected device, but it was confirmed that the AC waveform could be measured.

In order to find the current value of alternating current that fluctuates plus or minus, square the sampling value measured for several cycles to obtain the average value and take the square root.

The processing of that part will be as follows. The first program recorded all the values in the buffer to check the sampled value, but it is not necessary to calculate the current value. Every time sampling is done, squared sample values are added, and finally averaged to find the square root. If you call this process every minute, you can measure the current value every minute.

Power is voltage × current. Since the voltage of the household AC is 100 V, it does not become that it will become the power value if 100 V is multiplied to the current value.Since there is a phase shift between the voltage and the current in the case of AC, the actual power (active power) used is

I decided to grasp the tendency of electricity use by using the current value in order to investigate electricity usage pattern of equipment rather than obtaining accurate power value this time.

Since the current value per minute is obtained, it is displayed on the LCD of M5Stack.

Prepare 100 ring buffers, store the current value every minute, and display the value in the ring buffer on the LCD. The program of the part displayed on the LCD is as follows.

Send it to Ambient for visualization

Send current value per minute to Ambient for visualization.

Sending data to Ambient is easy. Connect to Wi-Fi with the setup function and initialize the Ambient object with ambient.begin (). Measure the current value in the loop function, set the data with ambient.set (), and send it to ambient.send ().

The program involved in sending to Ambient is as follows.

Measure the current consumption of the household

Many families in Japan are supplied with electricity in two systems called single phase three wire system. By measuring the current values of both of the two systems, we can measure the current use condition of the whole house.

It is a state that a clamp type current sensor is actually attached to the distribution board.

Please attach with care with the circuit breaker being dropped.

Looking at the measured current value with Ambient, the following graph is seen.

In the chart setting, set the graph size to "large", d1 and d2 are displayed in the same chart, and date specification is set.

The graph is the current value of the author's home. It is understood that the refrigerator is connected to line 1 (blue line), and it is constantly moving while repeating on / off. Line 2 has an oil heater and it runs from 0 o'clock to 6 o'clock. A big peak around 6:30 is an oven range.

Use prototype for M5Stack

M5Stack has "proto module" which can develop original extension module. We created a circuit that was confirmed with bread board using proto module. We made it possible to connect up to 4 current sensors.

M5Stack can be expanded with extension module such as GPS module, but with proto module, it can also expand its own functions, further expanding its application range.

If the ammeter is installed at home, it will be possible to visualize the use situation of electricity at home and energy conservation awareness will be enhanced. If you examine the everyday trends, it seems that it can be used as watching service data.

If you look at the electricity usage status of machine tools in the factory, it will be possible to visualize the operating status of the machine and use it for improving the operation rate.

This article was written by Shimojima of ambient data.

Although the article actually wrote after experimenting, it does not guarantee the operation. Switch science and ambient data are not responsible for any damage caused by using this article.