In this, the solar panel is fixed on a structure that automatically moves according to the position of the sun like a sunflower.

In this, the solar panel is fixed on a structure that automatically moves according to the position of the sun like a sunflower. 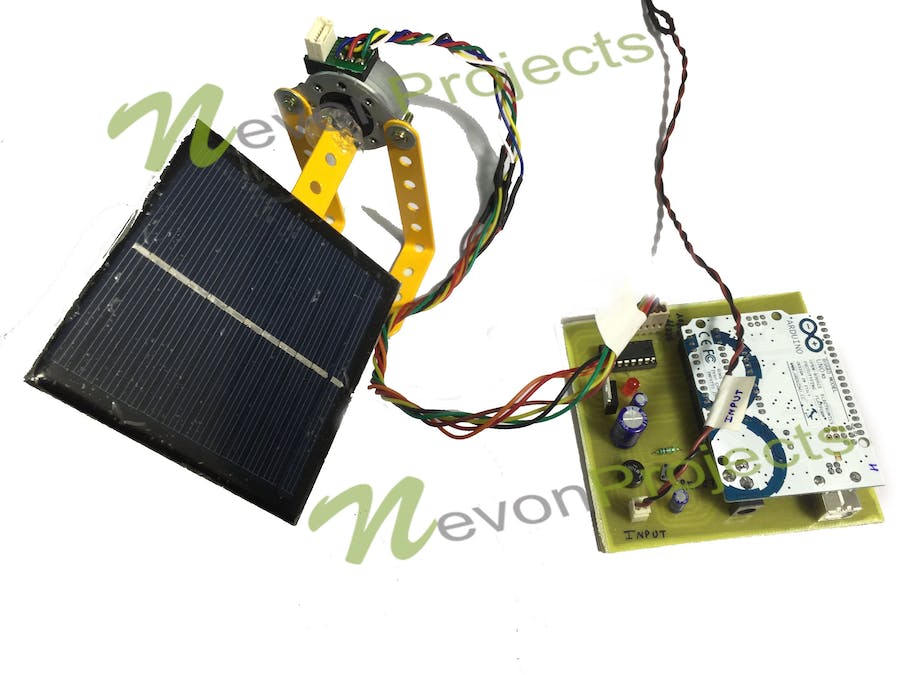 In this article we are going to make a Sun Tracking Solar Panel using Arduino, in which we will use two LDRs (Light dependent resistor) to sense the light and a servo motor to automatically rotate the solar panel in the direction of the sun light ans steer towards it. Solar energy is an unlimited source of energy which if harnessed properly will get the mankind devoid of using the conventional sources of energy he has been long using. This project has been designed keeping this in view to make the harnessing of solar energy more efficient. A Solar Panel is used to harness solar energy. Also, since a panel which is incident to the sun can gather more amount of solar energy, the solar panel is attached to a motor. This motor is electrically connected to the controller board. The system periodically checks the availability of solar energy from one horizon to other horizon periodically. In the scan it checks which direction has maximum incident solar energy and hence the incident sun and positions the solar panel in that direction. In this way maximum power that can be harnessed with the Solar Panel is harnessed by the system.

LDRs are used as the main light sensors. Two servo motors are fixed to the structure that holds the solar panel. The program for Arduino is uploaded to the microcontroller. The working of the project is as follows.

LDRs sense the amount of sunlight falling on them. Four LDRs are divided into top, bottom, left and right.

For east – west tracking, the analog values from two top LDRs and two bottom LDRs are compared and if the top set of LDRs receive more light, the vertical servo will move in that direction.

If the bottom LDRs receive more light, the servo moves in that direction.

For angular deflection of the solar panel, the analog values from two left LDRs and two right LDRs are compared. If the left set of LDRs receive more light than the right set, the horizontal servo will move in that direction.

If the right set of LDRs receive more light, the servo moves in that direction.