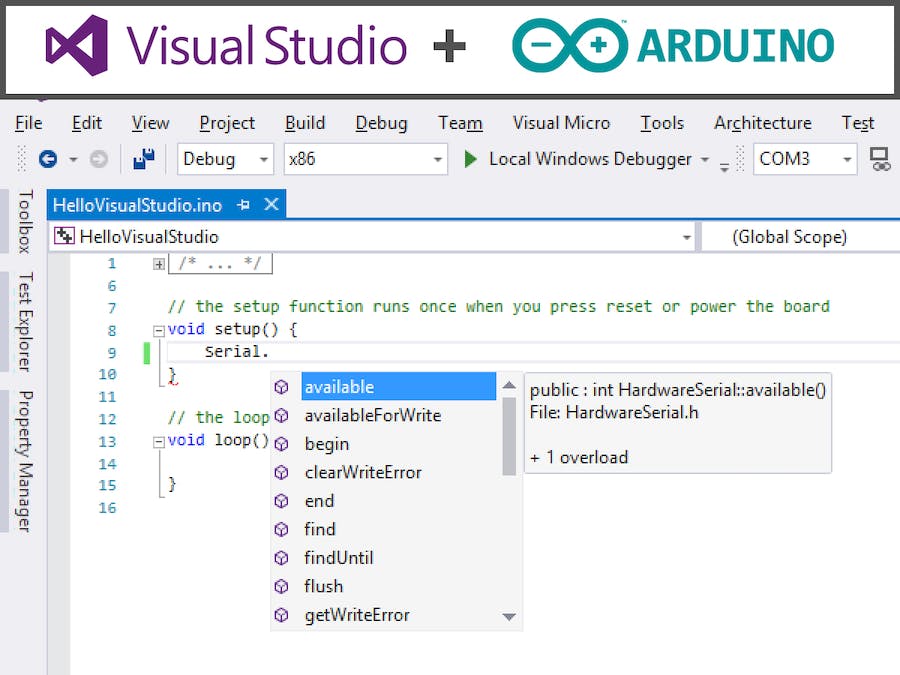 This tutorial needs no prerequisites.

Most of us use Arduino on daily basis. To be honest developing using Arduino IDE is a bit hard as you need to type everything yourself, it gets tedious if you want to keep your code clear and easy to understand

On the other hand, Visual Studio makes the development process so smooth and enjoyable, it helps you with whatever you want. It's also very comfortable for the eye as it has 3 different color schemes.

In this tutorial we'll do the following

Visual Sutdio is a great tool from Microsoft. It's available in many versions, in this tutorial we'll use the free version ( Visual Studio Community Edition ).

After you have downloaded the ISO file / Online installer double click on it and launch vs_community.exe (as I'm not connected to the internet the setup will give me a warning because it won't be able to download extra features, but this is pretty fine in our case), then chose the install type custom and a directory of your choice

Next we'll go over to the feature list, make sure you choose C++ ( you don't need windows xp support )

Then hit Next, it takes a while to complete installation

After the setup completes, you can login with your Microsoft account ( @hotmail, ..etc) or you can just Not now, maybe later then choose your favorite color theme

then it'll take a couple of mins to load for the first time.

Welcome to the world of Visual Studio

After you've installed Visual Studio with C++, you need to install the FREE plugin which is called Visual Micro, it contains many features such as:

If it doesn't allocate, mostly the Arduino IDE is installed in C:\Program Files (x86)\Arduino

Click Start trial if you'll use it for free

Now, head back to the New Project window, you'll find Arduino Project entry, Choose a name for the solution and click OK.

Now you should notice the following differences

now if I start typing, the suggestion list will popup but it doesn't seem to be very helpful at this moment because it doesn't highlight an entry automatically

IntelliSense is such a great tool in Visual Studio which is one of the biggest reasons why I use Visual Studio to code anything even if it requires a long search for plugins, read more about it and why it can help you learn faster, here

Set the entry of Member List Commit Aggressive to true then click OK, let's try typing again. ( I changed the theme of Visual Studio to Light just for the sake of having clear contrast between the text and background)

Now it highlights the entry normally, you can directly hit the ( . ) -period- and it'll auto complete the typing. then all you need to type is about 2 or 3 letters for each variable instead of the full variable name in Arduino IDE, which makes you easily pickup a slightly long descriptive names for your variables and functions.

It can also give you suggestions by hitting ( CTRL + Space ) then you can browse whatever you can type.

Another great feature of intelliSense is code documentation. Check out the following image.

Can you imagine the power you have now ? just by typing simple comments, they appear as a documentation for functions and variables.

Either you're a code expert or a beginner or anywhere between, this will definitely help you improve your code style and reduces the amount of effort you need to make a good piece of code.

if you really like both the coloring of Arduino and IntelliSense, you can get the best of both worlds by changing the appearance of Visual Studio, in the following image the color is already set to Arduino IDE and it also illustrates how to set it just for the sake of saving space.

Now it's time to give it a try, Connect your Arduino and you'll find it in the port list if all is well.

Now you can simply and easily make large Arduino projects with Visual Studio and the tools available in it, please respect the project & share the knowledge if you like it.

You can also visit my other tutorials, check out electronic components on utsource.net