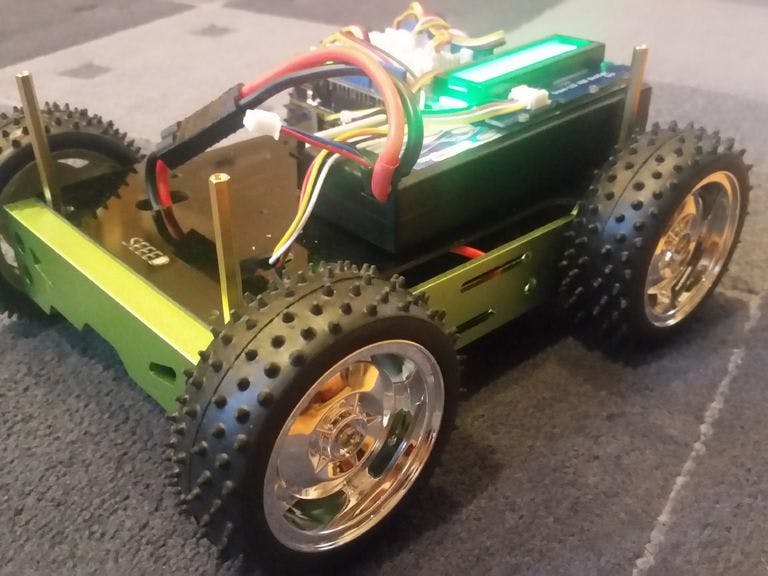 I was getting ready to join a small team of folks in conducting a Maker Experience for a group of High School students in Oakland, CA. Maker can mean a lot of things – for us it meant a focus on thinking about real world problems that can be simulated or solved via the Arduino with sensors and actuators. We had chosen the Arduino 101 along with the Grove Starter Kit for Arduino as our platform and were looking for a capstone project that would reinforce lots of the concepts we had been teaching as well as being memorable and fun. Through my network, I found some awesome Rover kits that were based on Edison and used Wi-Fi - it was the Seeedstudio Skeleton Bot - a 4WD mobile robotic platform. This platform has been around for a few years, but they were really high performance and very cool, so I decided to try to convert the Rover kits to use Arduino 101 and Bluetooth Low Energy communication. We had a great project for our Maker Experience! This tutorial describes the build/conversion of that Edison based 4WD kit to use Arduino 101.

There are quite a few Arduino based rovers on the internet - so what do I hope to add with this tutorial?

1. A practical example using the Arduino 101. With built-in wireless Bluetooth Low Energy communications (BLE) and a 6-axis Inertial Measurement Unit (IMU) - it feels like the Arduino 101 is made for motion! However, I could not find many real projects that put these new capabilities to use. This tutorial utilizes both the Arduino 101 BLE and IMU features in a useful way.

2. I also highlight the use of the Grove Starter Kit for Arduino, since it allows me to quickly add sensors and actuators (from a large catalog of inexpensive sensors) without the need to breadboard, which is more difficult and time consuming for me. This is a personal preference and not intended as a "knock" on those who are skilled at breadboarding.

3. My Arduino code is very modular - so hopefully it is usable even if you don't use the same motors, motor controller or the grove kit.

All software and schematics are provided. First, I describe building a basic 4WD Rover - Arduino based motor control taking commands via BLE from a smartphone - Android or IOS. In testing, I crashed the Rover a few times and found that trying to pick it up after I "turtled" it, with its knobby tires spinning fast, wasn't very safe. I decided to add a routine to detect crashes and turn the motors off when I crashed. I also have a few ideas for improving the rover and I will outline some of those at the end.

During the build, I benefited so much from public sample code and tips, I wanted to share what I learned in the hope that others can benefit from my work.

The high level steps for this tutorial are as follows:

3. Testing motor control with the Arduino 101

4. Building the BLE Remote Control – covered in a separate Instructable

5. Programming the Arduino 101 for a “Base Model” Rover

To create a “Rolling Chassis” from the Skeleton Bot – 4WD Mobile Robotic Platform – it is best to follow the recipe at Seeedstudio.com. I received the rover kit with the main body pre-assembled. This step can be completed by following the detailed instructions located at: http://www.seeedstudio.com/recipe/index.php?m=Hom...

As mentioned, the Lithium Polymer battery being used is a typical Radio Controlled car battery. It is a 2S battery – meaning is puts two of the 18650 battery elements in series. 18650s are rated at 3.7 volts, so having two in series, yields a 7.4 volt input for the motor driver.

In terms of output, the Grove I2C motor driver integrates an L298P dual H-bridge capable of delivering 2A per motor driver. It is also capable of driving DC motors in both directions and controlling speed and direction of each of the motor drivers independently. One additional feature of the Grove I2C Motor Driver board is that it has an onboard 5V regulator which can be used to power the Arduino through the I2C bus. I experimented and found that this worked well - the Arduino did not need to be powered by the barrel jack (or USB cable) when the battery was attached to the motor driver board. For more information on the this motor driver, please see the wiki entry at: http://www.seeedstudio.com/wiki/Grove_-_I2C_Motor_Driver_V1.3

I made sure to attach a grove cable and to feed the battery connector through a slot in the top acrylic plate before screwing it in place.

In order to ensure that the wiring was done correctly, I needed some simple Arduino code to spin the 4 motors at different speeds and different directions. The left motor in the front and the left motor in the back should spin identically. The same is true of the pair of motors on the right.

I found a good piece of code at: http://www.seeedstudio.com/wiki/images/8/8c/I2CMo...

I made a couple of modifications to adjust the speed of the motors in the loop. The code I used to test is attached.

Ensure that each motor turns, at three different speeds and in both directions. If that is not what you observe, check the wiring and retest until correct. I have attached a short video showing a successful motor test.

Step 5: Programming the Arduino 101 for a “Base Model” Rover

I start with a "Base Model" rover code - no frills, minimal options. It must contain:

I structure my code in a traditional way:

I find that creating user defined functions allows me to keep my code readable and structured – less chance of me writing spaghetti code; that is hard to understand and hard to debug.

The Base model code is a combination of 2 functions for controlling the DC motors – MotorSpeedSetAB and combined with the Rover state machine from deba168’s tutorial: Smartphone Controlled Arduino Rover, which I placed in a user defined function called RoverControl.

For communication, I modified the CallbackLED sample that showcases the use of Bluetooth LE on the Arduino 101. The main modifications were to define the UART profile (specific BLE characteristics and UUID’s) that the nRF Toolbox application expects to see. This is the application where I defined the remote control on the smartphone. There are several online tutorials on Bluetooth Low Energy (BLE) – I will not go into theoretical depth to explain its inner workings here. Let me walk you through each section of code briefly!

Section 1 (include and declare):

Here are all 4 lines of code in the loop() function:

I only want to respond to a command from the Remote Control if it is different from the command I am currently executing.

As I mentioned previously, I was inspired to add this feature after crashing the rover a few times. Either it would be up against a wall trying to push its gear motors into an immovable object, or it would be on its “back”, knobby wheels spinning quickly as it rocked back and forth – not what I consider to be safe to pick up without caution. Reducing “wear and tear” on the motors and reducing a need for first aid – both are a win.

I got the implementation idea from the Shock Detect sample for the Arduino 101. This is part of the Inertial Measurement Unit (IMU) functionality. After including the library, you initialize the IMU and attach an interrupt to the IMU and set it to trigger on “shock” in the setup() function. You set the peak and duration of a shock you want to detect and the Arduino 101 generates an interrupt, letting you take action in an event handler.

From a hardware perspective, I added the Grove Button to D2 and the Grove RGB LCD display to an I2C port on the Grove Shield. It should look like the pictures for this step.

In order to utilize the display, I include its library, initialize it in setup() and then write out the motor speed setting to the display as part of the RoverControl() function.

The interrupt service routine in the CurieIMU Shock Detect sample prints the orientation of the shock to the Serial Monitor. In my routine, I turn the motors off, change the RGB LDC display to have a RED backlight and writes a crash message to the LCD. I also set ‘crash’ - a Boolean variable that effectively blocks the rover from responding to new remote control commands until a reset button is pressed. The simple Loop() code now looks like the following:

The CrashRecovery() function is called when the Grove button mounted at the back of the rover is pushed. It is responsible for resetting the display backlight to Green and the LCD message displays the motor power setting again. The motors direction is set to ‘off’, the state is set to stop (‘c’) and speed is set to half power again. Finally, the crash variable to false for normal operation.

For Shock detection, I found that the initial setting of 1500 mg was too sensitive and indicated a crash in normal operation when changing speed or direction. With a little experimentation I was able to find a reasonable setting that didn’t generate false positives and still triggered in a crash.

The full sketch is attached.

This project worked out really well as a capstone project for our Maker Experience in Oakland. Our students were successful in building, testing and enjoying the rover.

I had a great time researching and building this rover. I learned a TON! As can be expected, not everything worked as expected the first time I tried. I learned way more when things didn't work, than when they did.

There are some things that worked really well on the Rover:

1. The BLE remote control is reliable and simple to create

2. The DC gear motors are high performance and work well

3. Using the Grove Starter kit made feature enhancements to the rover easy to create

4. Utilizing interrupts wherever possible for the IMU, BLE simplified the code and increased performance

Here are some things that did not work that well:

1. The I2C Grove Motor Driver would occasionally lock up and require a reset via small button on the board - only seen during code changes and debugging

2. The rapid direction and speed changes seems to be hard on the DC motors (a couple failures seen) - I should "smooth" out motor speed ramps and direction changes.

In addition to enhancements related to speed ramp smoothing I would like to add a range sensing in the front and rear to enable a "brake assist" to avoid collisions. Perhaps I will tackle these in my next tutorial. 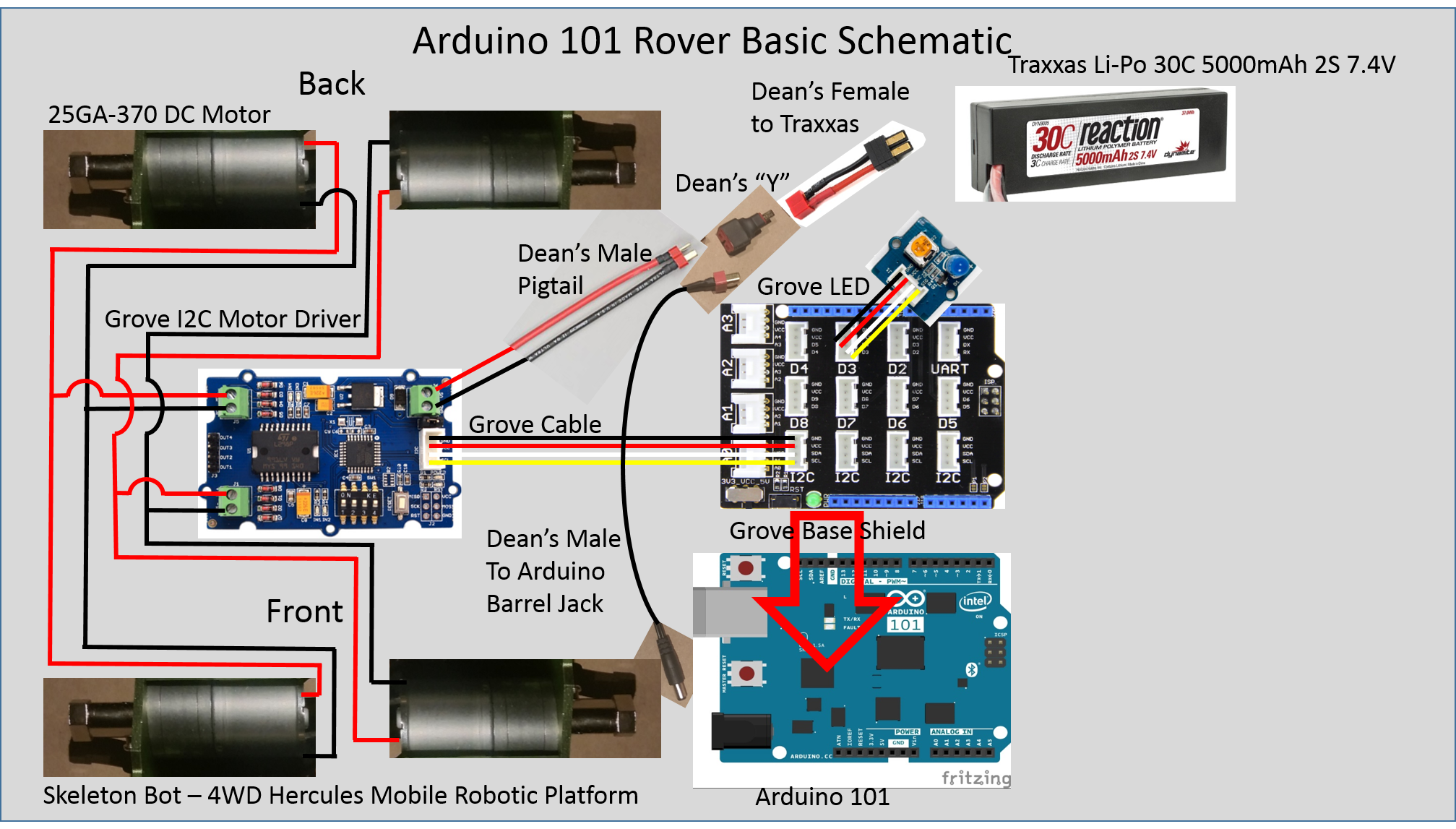 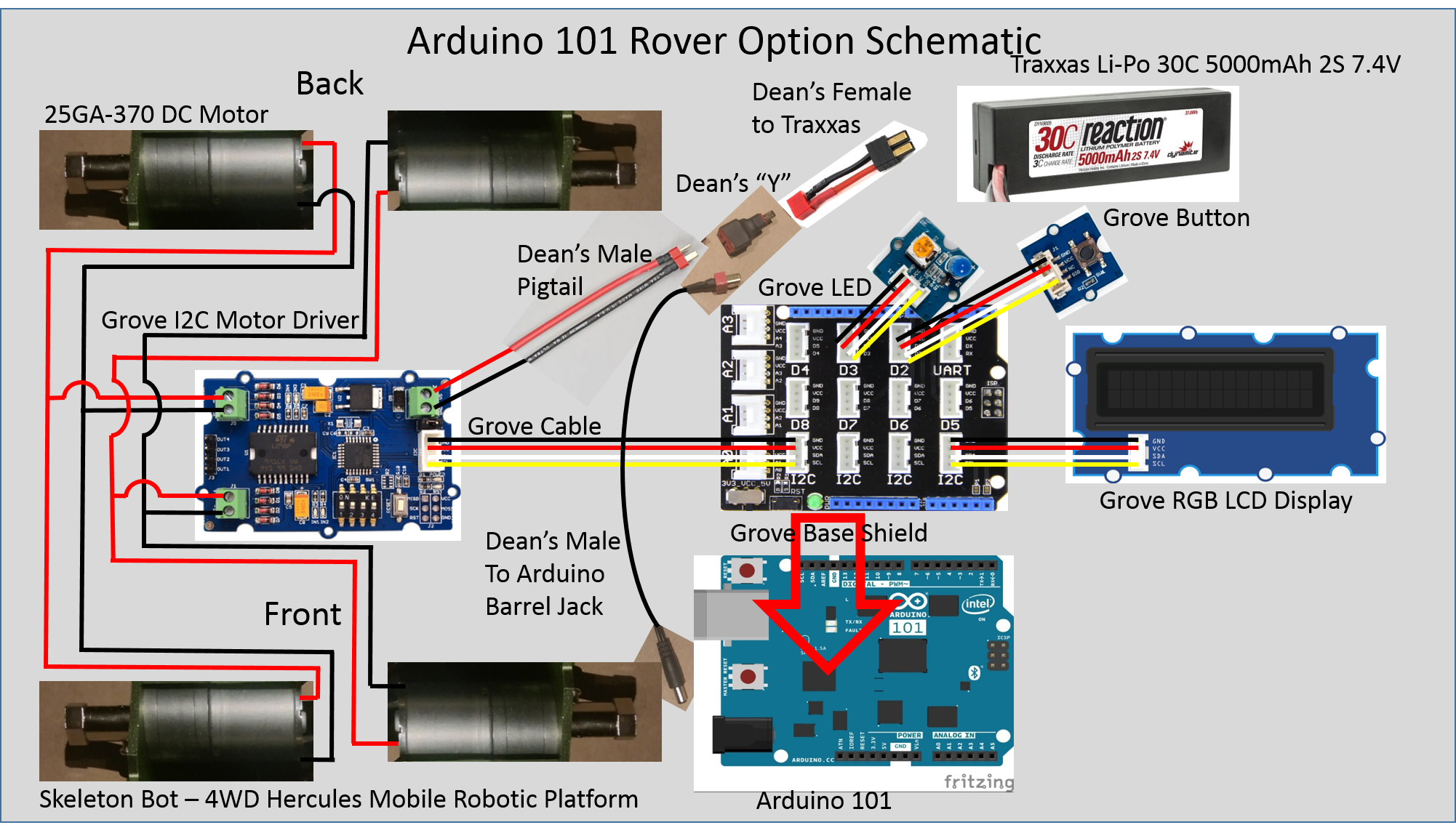 3 projects • 16 followers
ContactContact
Thanks to deba168, Nordic Semiconductor, and Arduino.cc.