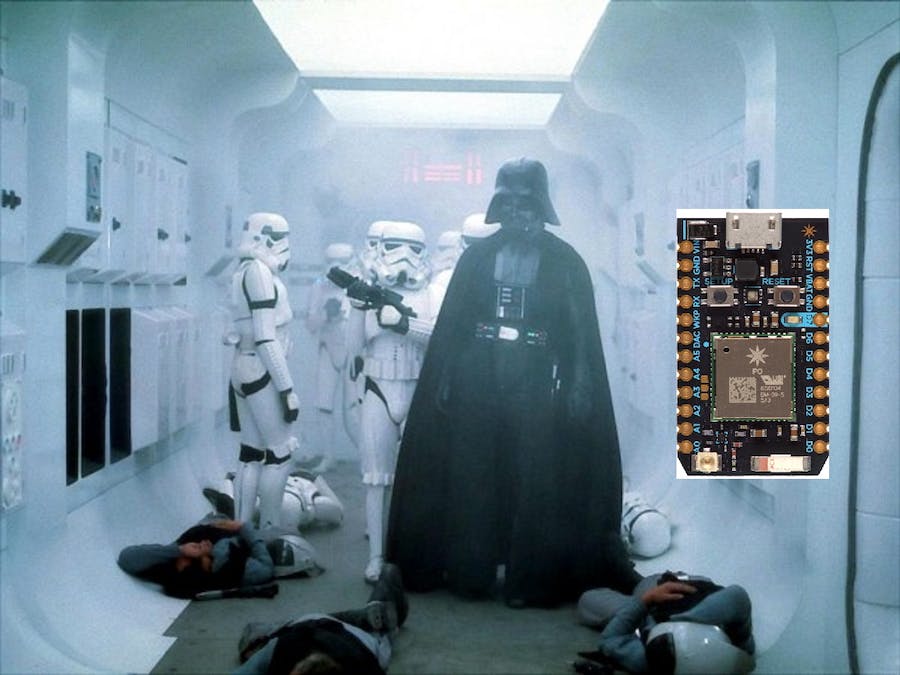 My daughter is a huge Star Wars fan (even though she hasn't seen any of the movies yet). Not surprisingly, she was all over it when I asked if she wanted to build a Star Wars themed project. I don't know how many times she has made me play the Imperial March (Darth Vader's theme song) when she is wearing her Darth Vader costume so that she can make a grand entrance into the room. So, we quickly settled on this project idea - automatically detect someone coming home and then trigger the playing of the Imperial March just before the person walks into the house.

This is a fairly simple project so it's well suited for beginners. I found it interesting because it's the first time I have used the publish / subscribe pattern to / from the cloud. It was also the first time I integrated different types of micro controllers into a single project. I love the Photon's simplicity and ease of use when it comes to creating a cloud connected solution. And you can't beat the variety and magnitude of add-on hardware available for the Arduino. Being able to put them together so easily enabled this project to come together quickly.

First, connect the LED to the Photon. Mount your Photon into the breadboard. Then connect the resistor between a Photon's ground pin and an open row on the breadboard. Finally, connect the long leg of the LED to a digital PIN on the Photon (I used pin D0) and the short leg of the LED to the open row to which the resistor is connected. Frankly, the LED is optional but I use it to indicate the state of the sensor as the PIR sensor itself provides no indication of when motion is detected nor does the Photon provide any indication when it publishes the event to the cloud.

1 / 4 • The small breadboard makes it easy to connect everything together.

Power up the assembly via the Photon's USB Micro B connector to either a PC or a wall outlet. Open up the Particle IDE and paste in sensor code provided below. Then flash the code to the Photon.

Now, if you wave your hand in front of the sensor, the LED should light up. Also, you can check your logs on the Particle Dashboard to see that the event was published.

All my published events (from all sources) are visible in my log.

Connect the LED and resistor to the photon just as you did in the prior step. Again, the LED is optional but I find it useful to indicate when an event is received from the Particle cloud. Next, connect the male end of the jumper wires to Photon's Vin, GND, and a digital pin (I used pin D7).  The digital pin from the Photon will connect to one of the Music Maker's GPIO pins to trigger the music. The Photon's Vin and GND connections will be used to power the Photon from the Arduino.

I soldered male header pins to the shield to make connections to the Photon.

Finally, connect your speaker(s) to the terminal block(s) on the shield - there is one terminal block for a right speaker and one for a left speaker. I just connected one speaker - I salvaged a small speaker from one of my daughter's broken toys before we threw it out.

That's it. Go walk in front of the sensor and sit back and wait for the music to start.

As I mentioned earlier, this was the first time I used the publish / subscribe pattern. It was quite easy to do with the Photon. In the sensor code, when the PIR sensor's signal pin goes HIGH, I turn on the LED and publish an event to the Particle cloud. Publishing an event just requires one line:

Initially, I didn't make the publish private - I didn't care as there is no personally identifiable information. But, when I went to subscribe to the event, I was getting a lot of false alarms - apparently, a lot of other users are publishing "motion" oriented events. So, I switched the subscribe call to only subscribe to events from my devices by adding the "MY_DEVICES" parameter:

And in order for the subscribe function to limit itself only to my devices, I had to make the publish private.

The trigger code simply calls the event handler - soundAlarm - when the motion event occurs. All the event handler does is turn on the LED and turn the GPIO pin on the Music Maker shield HIGH. The Arduino sketch detects the GPIO pin being HIGH and then waits 60 seconds (for me to park my car, gather my things, and enter the house) before playing the MP3 file on the SD card.

I setup the sensor in the garage on the shelves right next to where I park my car. I placed the trigger and the Arduino with Music Maker shield and speaker on the kitchen counter as my daughter is usually at the kitchen table when I get home. Both locations have wall outlets nearby which made it easy to power both parts of the project.