Making Art, Games, and More With Pi and Python

Making Art, Games, and More With Pi and Python 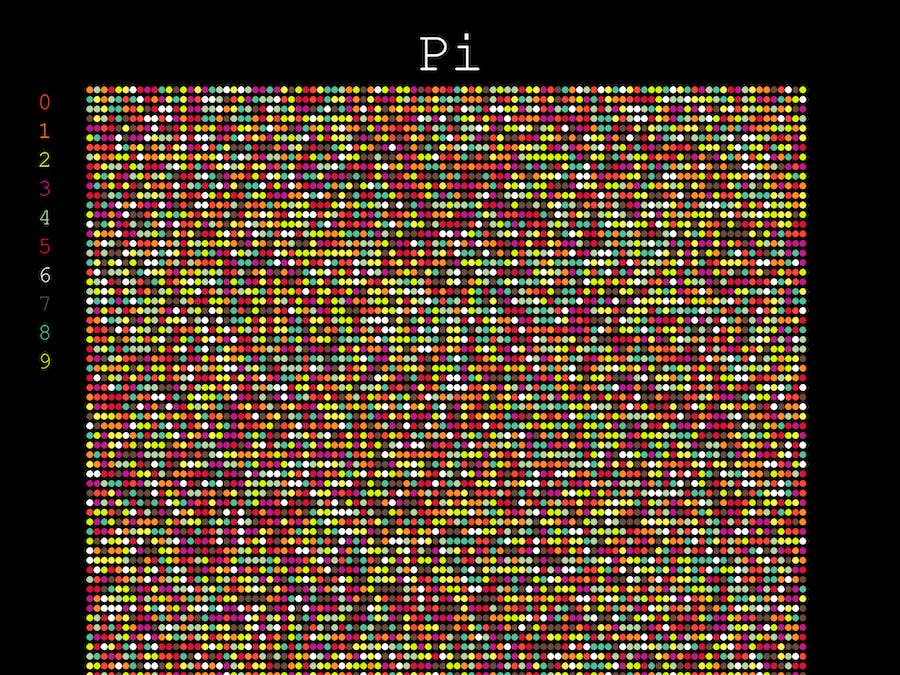 Celebrate Pi Day by making art, music, games with Pi using Python. In this Google Colaboratory Notebook, you will explore what Pi is, how it's used, and some fun applications. Open the Colab Notebook and follow along!

Table of Contents - Making Art, Games, and More with Pi and Python

Google Colaboratory is a Python development environment using Jupyter Notebooks that allows you to connect to Google’s powerful cloud computing resources and run Python code. It allows you to maintain a runtime environment where you can install packages, access data online, navigate a file system, and store/reuse data.

There are two different types of cells: code & text. Text cells are used to describe what's going on. Code cells can be executed one at a time by clicking the play button. The Colab notebook is broken up into 12 different sections. To run the code in a particular cell, click the play button to the top-left of the code cell.

Note: There is also a Jupyter Notebook in the GitHub repository that you can use.

In the first section, we will install all of the dependencies and clone my GitHub repository to gain access to the helper code and the text files containing the digits of pi. You must run this cell first before running any other cell. It downloads various dependencies into the Linux environment and installs various python packages needed to run the code later on.

Pi (π) is an irrational number. An irrational number means that the number cannot be represented as a common fraction and that its decimal representation goes on forever and never settles on a repeating pattern. That means we do not know, nor will we ever know the true value of pi.

Determining a value for pi has been a competitive game that has stretched on for ages as described in this timeline. To date, Timothy Mullican currently holds the record for computing 50 trillion digits of pi which took 303 days using an algorithm called "y-cruncher" developed by Alexander Yee.

Despite not knowing the true value of pi, it is still a very important number that we use daily. It is defined as the ratio of a circle's circumference to its diameter; however, its uses extend far behind basic geometry. You can watch this (relatively older) Numberphile video diving into pi in more detail.

Pi is the most infamous number. It is the only number with a widely-recognized holiday - Pi Day on March 14th. In this notebook, we will explore various aspects of pi and try to have some fun with the number.

Compute how old you are in terms of pi. Input your birthday in the fields specified to determine your age in pi-years and pi-days.

Approximate pi using a specified number of summation terms. We will be using the Leibniz formula for approximating π. It is an infinite alternating series that slowly converges towards pi as described by the formula below.

To use the program, specify how many terms (n) you would like to use to approximate pi. The program will spit out the resulting approximation.

Step 4: One Million Digits of Pi

Step 5: Plot Distribution of the Digits of Pi

Play the Pi version of Snake! I modified Snake so the snake appears as various segments of π. Instead of eating food, the snake is trying to eat the decimal digits of pi in sequential order. See how many digits of pi you can eat!

Note: This code won't run properly in Google Colab, so I had to embed my repl.it project. View the source code here. This project was originally forked from @LorenzoCampos and tweaked to make the pi version. See and play the game below.

See the full image in this section. It may appear as a solid white image for a minute as the image will take a little while to load in the Colab output window. The image is also saved in the "output" window and can be downloaded in the file tab on the left in Colab. The script uses the Pillow module to generate the image.

We can even make music with pi. The script below uses numpy to compute the waveforms and scipy to write to a.wav file. I kept some of the code in piaudio.py to keep from cluttering the notebook. This file is responsible for mapping the string note representations to specific frequencies and constructing the selected waveform for each note based on the duration and the BPM.

Try playing along with the notes dictionary to see what sort of cool sounds you can make with pi. Map certain digit values to keys on the keyboard. Must write the notes in the following format shown below. You can also specify what type of waveform you want by supplying the waveform argument to the play_note() function. It can either be sinusoid, triangle, sawtooth, or square.

A play window will show up in the output window to preview the audio. You can also download the.wav file. The audio is also saved in the "output" window and can be downloaded in the file tab on the left.

Processing is a flexible software sketchbook and a language for learning how to code within the context of the visual arts. It is a free graphical library and IDE. It is built in Java; however, there is also a Python mode.

You can't run Processing code in Google Colaboratory. You will need to download Processing and install the Python Mode add-on. Follow this Getting Started guide.

This Processing script parses the first 10, 000 decimal digits of pi and represents them as circles. The color of the circles indicates the numerical value of that digit.

This script shows how we can essentially use the digits of pi as a pseudo-random number generator for an algorithm.

Below we are going to explore the Six Degrees of Kevin Bacon using pi. Six Degrees of Kevin Bacon is a game / thought experiment that is an example of "six degrees of separation". The idea behind "six degrees of separation" is that any two people are (on average) six or fewer social connections away from each other. As a dumb way to explore this, we will load a random Wikipedia page and follow the links on that page until we arrive on Kevin Bacon's Wikipedia page.

The script below can take a long time to execute depending upon how many pages it needs to visit until we find Kevin Bacon's Wikipedia page. The minimal number of pages I've needed to visit so far has been 2, 254 pages.

For more projects, visit these links:

8 projects • 5 followers
I am an electrical & computer engineer turned educator. I am leveraging my experiences to create engaging curricula for students.
ContactContact