ESP, you say? Why not make an ESP8266 programmer that looks like a beautiful "talking board" planchette... and is also wearable?

ESP, you say? Why not make an ESP8266 programmer that looks like a beautiful "talking board" planchette... and is also wearable? 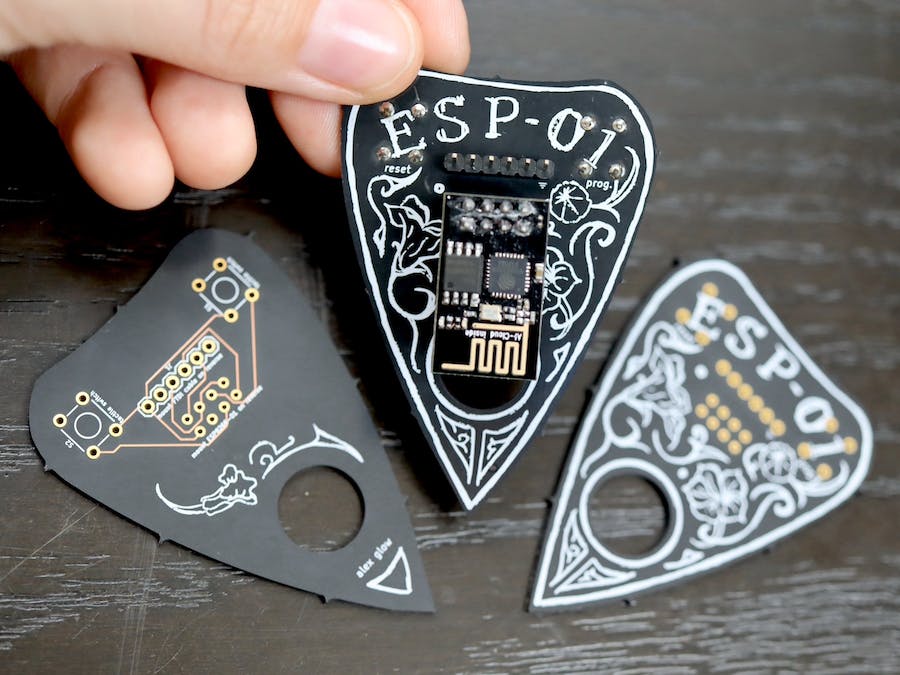 I'm building a suite of arcane tech tools that make everyday electronics tasks more beautiful. This one came out so nicely that the final version has a hole for an earring hook. (It's pretty large for an earring, but what a statement!)

The original programming circuit came from this article by Alasdair Allan in Make. I've built a couple of ESP8266 programming jigs based on this in the past, and while they usually worked, sometimes there'd be issues attributable to loose wires, or other causes that would take ages to debug. So, when I decided to play with the ESP-01 module again, it was a no-brainer to design a PCB version.

Given the "ESP" naming of Espressif modules, I thought it'd be fun to make it in the shape of an Ouija-style talking board planchette.

Order now on OSH Park! Make sure to select the After Dark service, for maximum pretty. ✨

Two boards – one populated, with the FTDI cable and ESP-01 connected; the other bare
As an earring! :)

As mentioned above, the original circuit came from this article by Alasdair Allan in Make. I added buttons to make the programming/test process easier: to use it, press down both the Programming and Reset buttons, and then release Reset, then Prog. This will boot the board into programming mode. When it's time to test, just press Reset again and it'll boot into your sketch.

I designed these to be manufactured by OSH Park, whose "After Dark" service – clear solder mask and white silkscreen over black PCB substrate – makes a beautiful aesthetic statement. So, I did my best to place all of the wiring on the bottom of the board, since it shows through the solder mask. It isn't the most technically perfect, but it's pretty, and it works!

Front and back of the boards, on a dark wood background

The buttons are placed on the bottom, so that the top design is unobstructed; they also act as standoffs for the board to rest on the desk, and provide a very satisfying action when you press down the corner of the planchette to program! I love little clicky buttons as much as anyone, but I love the solid feeling of using the board itself as the pressure surface.

I drew the top design in Procreate, on my iPad, using a rough brush that looks a bit like chalk drawing. The outline came first; I determined the dimensions from an image of a standard planchette, and used that to create the outline of the PCB in KiCad. Afterwards, I ended up making a second, cleaner version that blended better with the overall aesthetic. I kept the outline and center circle on their own layer, so I could independently edit the top and bottom design elements and play around with ideas.

For the plant designs, I took inspiration from these Art Nouveau-esque nasturtiums in a public-domain image by Maurice Pillard Verneuil. I traced a couple of the flowers and placed them around the planchette, with my own added curlicues and flourishes.

I used a standard serif font to create and place the ESP-01 lettering, then traced it and added a bit of extra character with the lining. In my opinion, the silkscreening on this looks spectacular; a beautiful job by OSH Park!

There are other useful bits of text and images, here and there: a ground indicator to show you which way the FTDI cable goes on, text labels telling you how to solder on the headers, and "reset" and "prog." labels for the buttons. Labels are important, but they don't have to mess up your aesthetic ;)

I ran a test using the same Arduino example code as my previous jig (reproduced in the Code section below), which I believe comes from Sandeep Mistry's ESP8266 library – but, as of writing this project, it was a few weeks ago and for the life of me I can't find the example anymore. It was the same example file, but under a new name. (I may update this later, when I test it again and build an actual project – since my Arduino environment is currently set up for programming ATtiny85 chips for another project, and I don't want to mess it up!)

Can't wait to use this for some real projects! 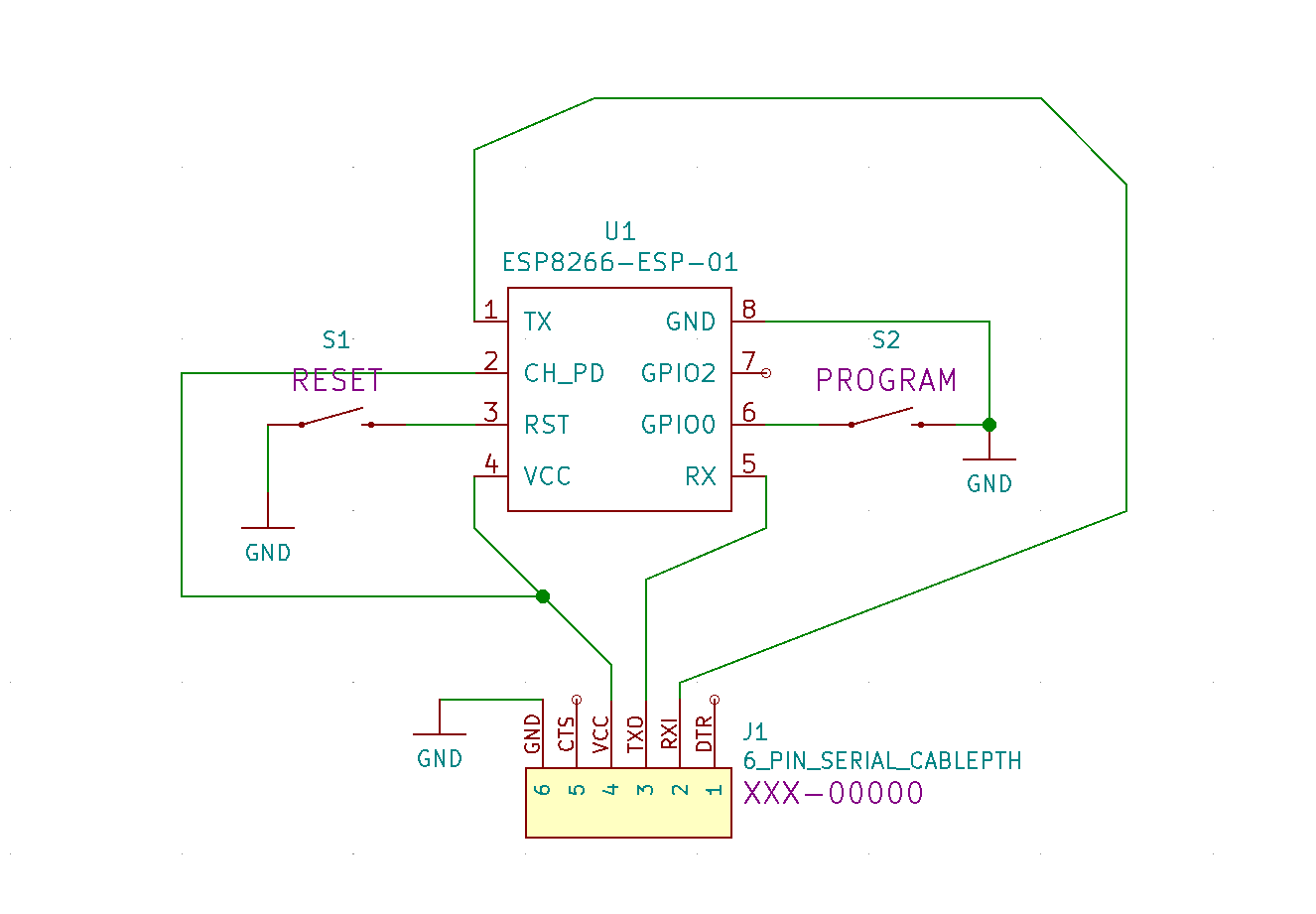 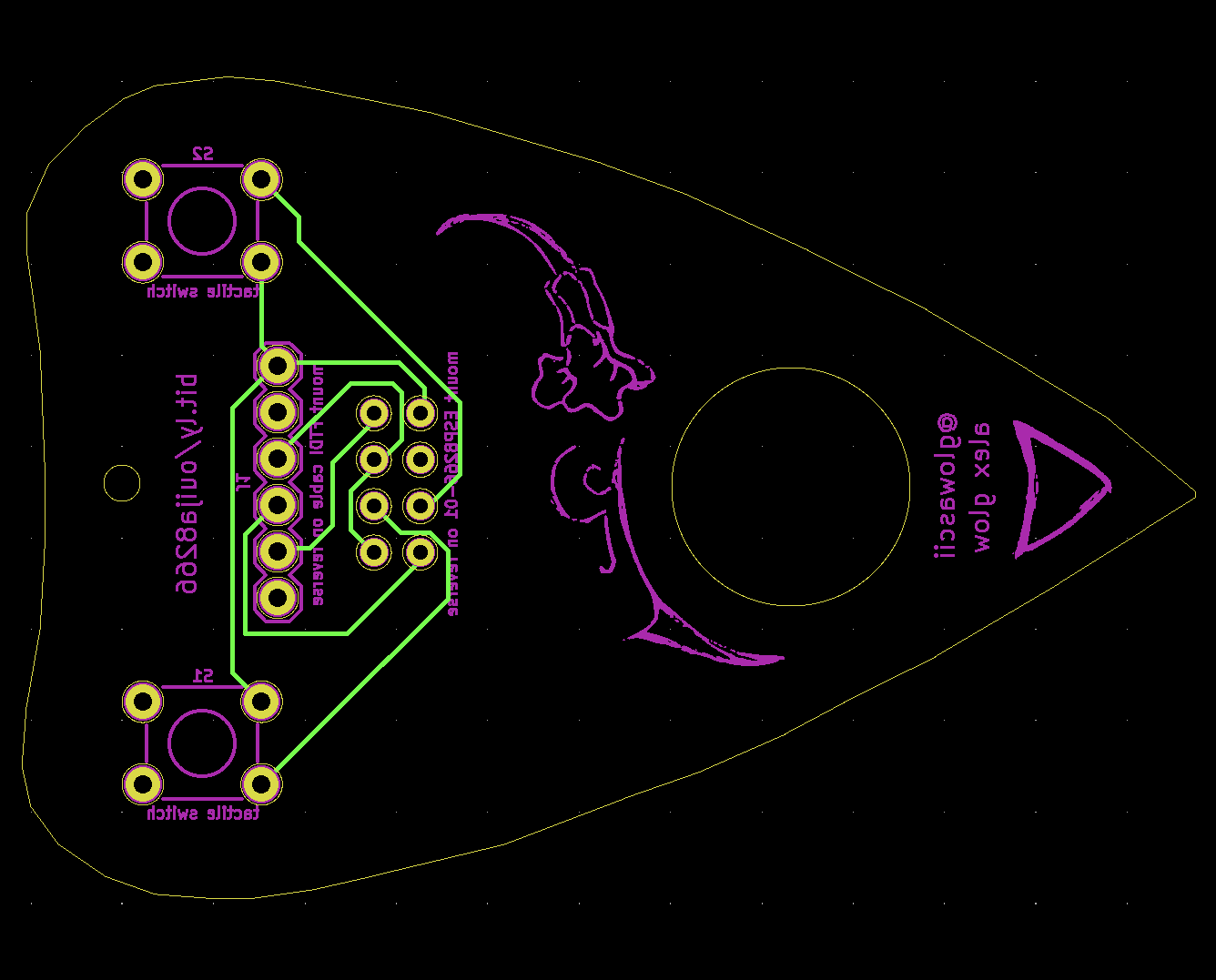