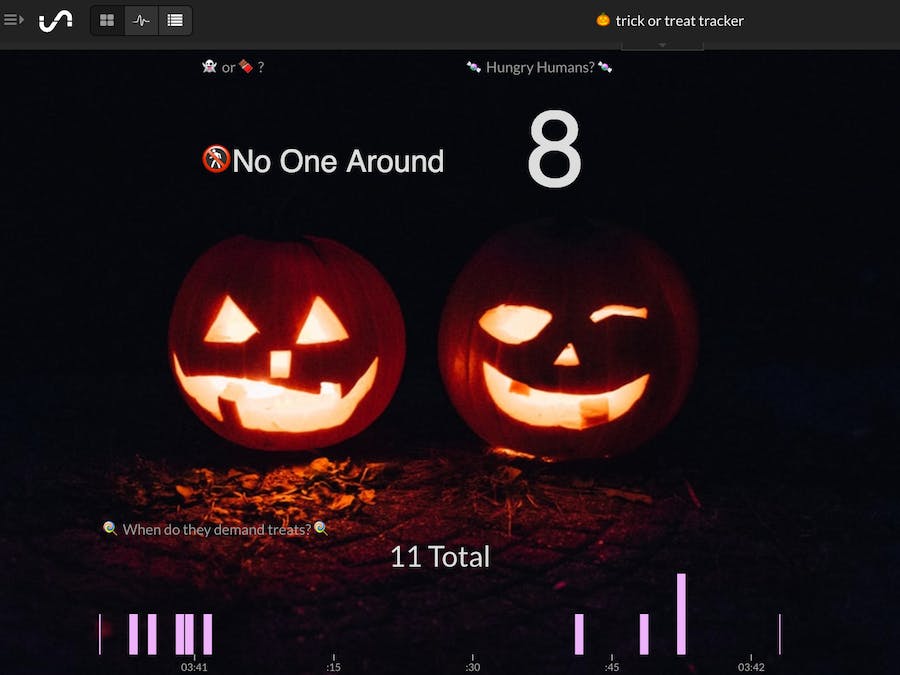 Looking for a quick Halloween project that's useful in more ways than one? Want to put that Pi Zero WH to good use? Feel like using data to determine how much candy you'll need for next year?

Get ready to build the Pumpkin Pi Trick-or-Treat Tracker! Doubling as decoration and a people tracker, this Pi-in-a-Pumpkin changes color and streams when motion is detected. Starting from absolute scratch, this project shouldn't take you more than an afternoon to put together - just in time for Halloween!

Once you have your Pi up and running, we need to connected the motion sensor & LEDs. Make sure you Pi is not connected to power at this point.

LEDs are a bit more tricky than the motion sensor because they require a resistor in order to run correctly without damaging them or the Pi. I used three 220 ohm resistors but 220 and 330 ohm resistors are usually used with LEDs.

To wire everything up you can either:

We will be connecting our LED to pins 11, 13, and 15. This is a little bit trickier than the motion sensor, though, because the legs on the LED correspond to a specific color! The long leg is GND; and, on my LED at least, the legs went Red, GND, Blue, Green. I connected Blue to Pi pin 11, Green to Pi pin 13, and Red to Pi pin 15. The second picture shows the final circuit connections.

Sure we can see when motion's detected with the LED, but how are we going to track how many trick-or-treaters dropped by to steal our candy?

We're going to stream to a dashboard every time motion starts and stops being detected. Since this dashboard is accessible from anywhere with an internet connection, we can remotely monitor whether or not someone is approaching the front door/candy bowl.

Install the Initial State Python module onto your Raspberry Pi. At a command prompt (don’t forget to SSH into your Pi first), run the following command:

After Step 2 you will see something similar to the following output to the screen:

When prompted to automatically get an example script, type y. This will create a test script that we can run to ensure that we can stream data to Initial State. The next prompt will ask where you want to save the example file. You can either type a custom local path or hit enter to accept the default location. Finally, you'll be asked which Initial State app you are using. If you've recently created an account, select option 2, enter your user name and password. After that the installation will be complete.

Let’s take a look at the example script that was created. $ nano is_example.py On line 15, you will see a line that starts with streamer = Streamer(bucket_.... This lines creates a new data bucket named “Python Stream Example” and is associated with your account. This association happens because of the access_key=”...” parameter on that same line. That long series of letters and numbers is your Initial State account access key. If you go to your Initial State account in your web browser, click on your username in the top right, then go to “my settings”, you will find that same access key at the bottom of the page under “Streaming Access Keys”.

Run the test script to make sure we can create a data stream to your Initial State account. Run the following:

Go back to your Initial State account in your web browser. A new data bucket called “Python Stream Example” should have shown up on the left in your log shelf (you may have to refresh the page). Click on this bucket and then click on the Waves icon to view the test data.

Create a script and open the text editor with the following command:

Copy and paste the code from here into your text editor.

Before we try to run anything, we need to make a few edits and review what's happening in our script.

Lines 1-21 are for initialization. First we import the Pi's GPIO interface and a way to sleep our script. Then we import the Initial State streamer that we installed on the previous page.

GPIO.setmode specifies which numbering system we are using for the pins. Rather than physical location, we are using the Pi's numbering system. As in our diagram earlier, the pins we chose were 23, 17, 27, and 22. We then setup the motion pin as input and the LED pins as output.

Lines 23-41 are important because we are initializing the Initial State streamer and setting the LED to yellow. Put your Initial State access key on line 28.

Lines 43-77 are the meat of the code. If motion is detected the script will check to see if " Time For Treats!" has already been streamed. If it hasn't, it's sent to Initial State and the LED is set to red; if it has, the script waits 1 second and then reads from the motion sensor again. The same goes for if no motion is detected.

It's time to test the code out! Make sure you've saved your edited file with your access key added on line 28, and then enter into the terminal:

Now to verify that our readings are being streamed to Initial State.

Head on over to Initial State and check out your dashboard! You should see a bucket called "🎃Trick or Treat Tracker". Wave your hand near the motion sensor and watch it update!

My dashboard consists of 2 Summary Tiles displaying the Last value and a Histogram of event count so I can see what times the sensor was triggered.

Here are some things to consider:

We're going to want to start our script as soon as we power on the Pi since our only control over it will be the power button on our portable power bank. Lucky for us, this is super easy!

First off, we're going to want to add a line to our visitors.py file to pause the script for 1 minute while our Pi connects to the WiFi. This is the crude way, but it's effective. Run:

And add sleep(60) to line 35 (between counter=0 and # Initialize the Initial State Streamer. Ctl-X, Y to save and exit. Using the service crontab we can start our script at boot:

Pick your favorite text editor (I like nano) and at the bottom of the file (under all of the comments), add @reboot sudo python /home/pi/visitors.py. If you named your script something else or put it in a different directory, replace /home/pi/visitors.py with the correct path. The path in my example is just the main Pi directory.

Save the file and reboot your Pi for it to take effect!

If your pumpkin is going to be sitting too far from an outlet to be plugged in, portable batteries work great! I recommend this one - the pack lasted 12 hours. Make sure the Pi can still reach your houses WiFi.

Carving a fake pumpkin to fit your project in is easy as...PUMPKIN PI.

I just cut a hole in the bottom big enough to fit my portable battery and a hole in the side that my motion sensor could peak out from! Electrical tape is my best friend. Put your Pi inside and test it out using your real-time dashboard.