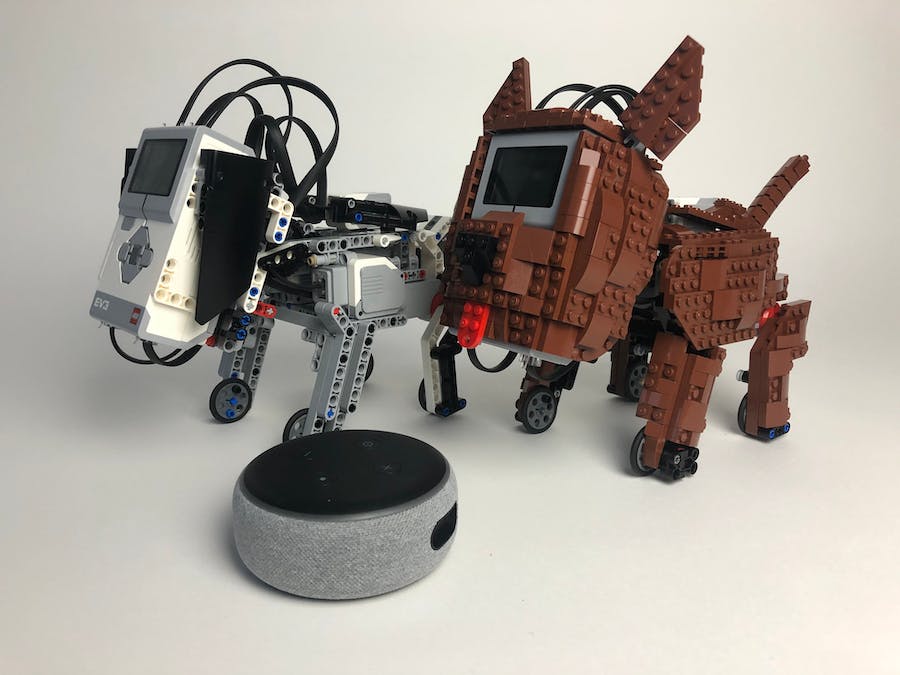 In my free time I love to build robotic animals with LEGO. When I build an animial my goal is to make the experience as natural as possible. Until now I never build a LEGO dog, since you use voice commands to interact with a dog. Using Alexa it is finally possible to create an intuitive voice interaction with a LEGO dog.

To get the full dog owner experience I decided to turn the experience into a puppy training. When you buy a puppy she still has to learn the basic commands: sit, down and stand. Using an Alexa device as a puppy trainer you can train the puppy such that it understands these commands. This experience is demonstrated in this video:

When you adopt a puppy you have to teach your puppy everything. To do this you often get help from puppy trainers. This is the experience I want to create with this project. The commands you can teach your puppy are sit, down, and stand. The position of the Lego puppy are:

You can start the puppy training by saying:

The Alexa device will respond with

You can give the following commands to your puppy:

If you issue a command that is different, the Alexa device will respond with:

The puppy will respond to the commands by performing the action she thinks she has to do.

When the puppy is very young she does not understand the commands. Hence, the action she performs is not always correct. Sometimes she does the correct command. To teach your puppy what is correct and what is incorrect you can give your puppy feedback:

When you keep on training, the dog will learn all the commands perfectly.

After the dog finished responding to a command the Alexa device will respond by telling you how to give feedback:

When the puppy is doing something good, the Alexa device will respond with one of the following sentences:

When the puppy is doing something incorrect, the Alexa device will respond with one of the following sentences:

When you gave feedback to your puppy by petting her back or saying 'Alexa, no', the Alexa device will give you a new task:

When you just petted your puppy after a doing something correct, the Alexa device will respond with one of the following sentences:

When you just said 'Alexa, no', the Alexa device will respond with one of the following sentences:

I choose to implement multiple responses from the dog trainer for each of the possibilities. This keeps the conversation with the Alexa device very intuitive. Moreover, a real dog trainer also does not say the same sentence each time.

At the end of a training

After a couple of minutes the training is finished, the Alexa device will inform you by saying:

When your puppy understands all the commands, but you want to keep on training, you do not have to buy a new puppy. Simply say "Alexa, restart puppy training". Your puppy will forget all the commands and you can train them all from the start!

The puppy is completely build out of Lego. Since I understand that it is hard to get all the correct pieces to build an exact replica of this puppy, I decided to make a puppy that has the same mechanical functions as the Lego Puppy from the Lego Education set 45544. Hence, it is possible for everyone with this set to build a Lego Puppy that you can train using Alexa. The exact same program can be used for this puppy.

The mechanical functions are:

The building instructions for the Puppy from the LEGO 45544 can be found here:

You can decorate this puppy in any color you like to match your favorite dog.

For everyone who wants to make an exact replica of the puppy I build, some detailed photo's:

To make the puppy perform commands some coding is necessary. The full code can be found in the puppy_training.py file in the attachment of this project. Next I will explain the most important parts:

In the initialization of the robot three arrays are created. Each array corresponds to a command (sit, down, or stand). In each array the poses are stored that the puppy relates to the command. In the beginning the puppy does not know any commands, hence each array is filled with all three positions (sit, down, stand):

When the puppy receives a command from the Alexa device, the puppy will randomly choose a position from the array corresponding to the command received. This is achieved using the following code:

At the start of the training this random action can be any position, but by repeating the commands and giving feedback the array will change to only contain the correct pose. This is done using the following:

Negative feedback: remove the current pose from the array, next time the command is given the puppy will do another pose. This achieved using the code:

Notice that after giving positive or negative feedback a message is send to the Alexa device. By doing this the Alexa device can respond with a new task during the training.

When a message from the Alexa device is received the following code is executed:

If a restart message is received all the arrays with poses are reset to the initial values and you have the train the puppy form the start.

If a command is received the following code is executed:

If the command is no, the negative feedback code is executed

If a command sit, stand or down is given the command code given above is executed and a new pose from the array is selected. After moving to the new pose a message is send to the Alexa device with the current pose and command. By doing this the Alexa device can respond and tell you to respond with negative or positive feedback.

Moving to a new pose

The following code is used to move from the current pose to the next:

This code detects the current pose, and determines the correct actions to go to the new pose.

The other position changes can be found in the puppy_training.py file in the attachment of this project.

The code taking care of the puppy training can be found in the index.js file in the attachment of this project. The code is based on the code of mission-04 of this contest.

Next i will explain the most important parts that create the puppy training.

The sentences that are used as a response during the training are stored in arrays:

when a message from the EV3 is received the following code takes care of the responses of the Alexa device:

This code selects the right response type and picks a random sentence out of the arrays defined above. This random sentence ensures the conversation is unpredictable and therefore more natural.

To summarize this project contains all elements to create an intuitive Lego puppy training with Alexa. If you want to create this experience yourself you can start by making the puppy from the Lego Education 45544 set and decorate it to look like your favorite dog. All the code necessary for this project is included and some code snippets are explained. So lets get started!

1 project • 12 followers
I build LEGO robotic animals as well as bringing life to LEGO Friends and LEGO Elves sets with the incorporation of LEGO MINDSTORMS.
ContactContact