Why buy an arcade cabinet when you can build one! Our love for retro games lead to this somewhat unusual Arcade Cabinet/Retro Game Station.

Why buy an arcade cabinet when you can build one! Our love for retro games lead to this somewhat unusual Arcade Cabinet/Retro Game Station. 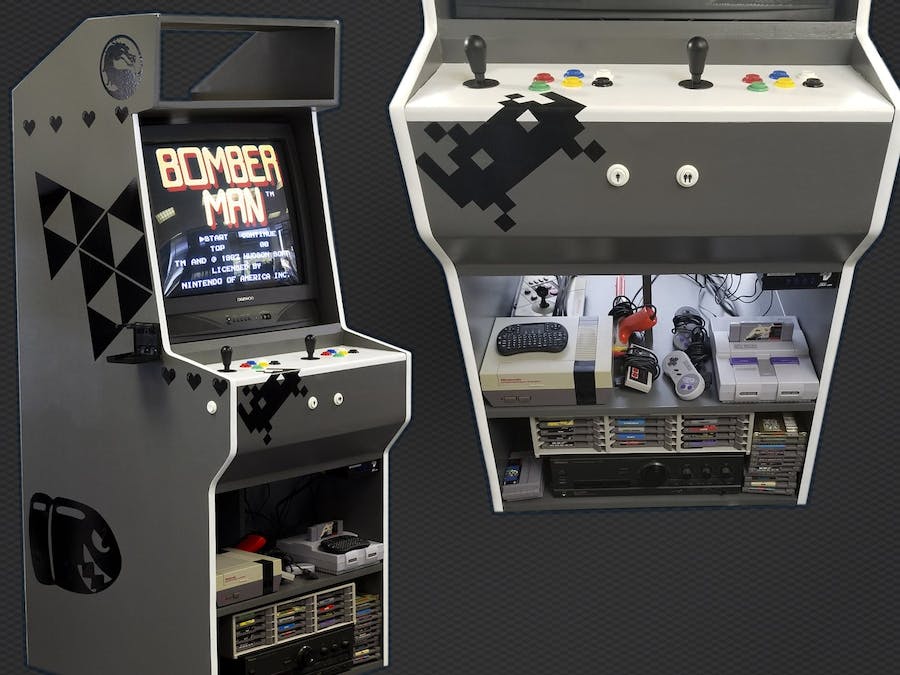 So I have been wanting to have an arcade cabinet for a few years now. I have built a few half cabinets in the past, but there is something about a full size one that seems special to me. Also I thought it would be fun to turn this into more of a Retro Game Station than just an arcade cabinet.

I started the build first by finding a CRT TV for sale on Craigslist locally. This would determine the size of the cabinet and almost everything after. I found that it was actually pretty hard to find a CRT TV nowadays. It used to be easy to get them in thrift/donation shops, but almost none of those take them anymore. Luckily there were two on Craigslist, so I was able to get one that was about the size I was looking for.

I usually find it easier to lay out the design when I model the things that will go into it, such as the TV. I also found models online of an NES and SNES.

Once I was happy with the size and pieces I laid the parts out on 4'x8' sheets (the size of the 3/4" MDF sheets). This helps me figure out the most efficient layout that makes for the easiest cuts and uses the least amount of wood.

You can download the Google Sketchup file here: Arcade_Machine.skp

Next I went out and bough three sheets of 3/4" thick 4x8' MDF. I used the layout above to take measurements from the 3D model and transfer them to the sheets of wood using rulers, a tape measure, a pencil, and a long straight edge. After a few hours of measuring the lines had been transferred.

Next it was time to start cutting out the pieces. For this I used a cordless jig saw. Any duplicate pieces such as the sides I clamped together and cut at the same time.

After finishing the cuts, I started to mark out where the center pieces wood attach to the sides.

Once the lines were done it was time to start drilling pilot holes, then carefully attaching the first few center pieces. I had a friend help me get the first couple pieces on as it would be very difficult to do that alone.

I used clamps to help hold the center pieces in place while they were being screwed in.

I picked up some nice locking caster wheels when I was out getting other supplies. This was not originally part of my design, but this cabinet was going to be so heavy that I thought it would be nice to make it easier to move. Unfortunately my original design did not account for this, so the bottom piece of wood was inside of the sides instead of having the side pieces on top, which is not very strong. You will see in future sections that I added a support piece under the bottom piece and sides to give it some strength.

The bolts were a little to long, so I made some wood spacers out of 1/4" scrap plywood. Then I attached the caster to the bottom of the cabinet.

Now that the machine was together it was time to start filling in gaps and holes with wood filler, as well as drill out the holes for the control panel. The filling took a lot of sanding and four fills to get all of the gaps and holes smooth.

I used a vinyl cutter to cut out the layout of the buttons.

Then I put a small pilot hole in the center of each vinyl circle.

Next I used a hole saw bit to drill out the holes. A "forstner" bit would have been better here, but I didn't have the correct size.

After drilling the holes, and filling the gaps with putty it was time to set up a small painting area. I also used a router with a slotting cutter 0.080" 3-Wing bit to cut the slots for the 3/4" T-Molding.

Once the slots were cut and the holes were filled it was time to put on a couple coats of primer.

The control panel was done off of the cabinet to keep it removable.

After a letting the primer dry for a couple days, I began to roll on two coats of final coat.

After the paint was dry I used a rubber mallet and a razor blade to install the T-Molding trim pieces on the front and back.

Time to install the buttons, joysticks, and wire it all up to the USB controller board!

Now that the control panel is wired up, it is time to start finishing the inside where the Intel NUC and other components will hide.

First I drilled out some holes for a couple of 120mm fans to keep the fanless NUC and HDMI to RCA converter (which gets surprisingly hot) cool.

Next I added two exhaust fans attached with industrial strength velcro, as well as velcro'd in the NUC and HDMI to RCA converter. I also wired up the fans to a 12V 2A Power Supply Adapter.

Next I put in the CRT TV and added some plastic stops to keep it more secure. Then it was time to close up the control panel and add most of the consoles and other accessories to their places.

Very messy, will do some wire management in the future.
Added some speakers.

After a bit of hard work testing the game consoles, some games, the RCA switch, and Amp. It was time to add some vinyl stickers to the side to give it some character.

There are still more vinyl stickers to cut and put on but I ran into some issues getting the stickers to stick properly on the Latex paint.

This is currently where this project is. There are still some things to do but it is nearly complete! Stay tuned for updates.

3 projects • 15 followers
Hacking minimum order quantities to get parts and you can too.
ContactContact