Improved version of the soldering iron controller for Hakko 907 iron. To simplify building the controller, LCD screen is implemented.

Improved version of the soldering iron controller for Hakko 907 iron. To simplify building the controller, LCD screen is implemented. 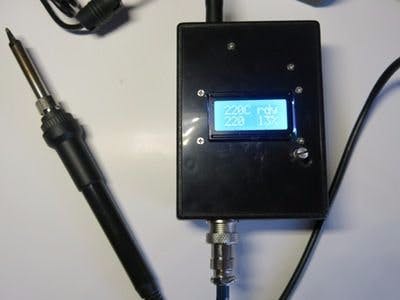 The controller deals with the hakko 907 soldering handles with replaceable tips and has built-in heater element and thermistor OR thermocouple to check the iron temperature. The handle has two independed electrical circuits for the iron heating and temperature checking. This controller can be used with another iron handle that has the similar architecture.

It is better to replace the plug on the iron handle with another one, for example, aviation plug GX16-5 or GX-12-5.

The key features of this controller are:

As I mentioned before, the controller has several modes:

When the controller is just powered on, the standby mode is activated. In this mode the soldering iron is powered. The main display shows the following information:

In the main mode the display shows the following information:

In the main mode, the controller checks that the iron is working properly. If in 10 seconds from start the temperature would not changed, the controller would switched off the power and the message 'Failed ' would be displayed on the screen. In this case, press the encoder button lightly to return to the standby mode.

To get to the setup mode, long press the encoder in standby mode. In the setup mode the configuration parameters can be adjusted. There are 7 menu entries in this mode:

tip: You should load default parameters before first use of the controller or after new minor software release is flashed.

The schematics of sensor reading of this controller depends on the type of the soldering iron thermal sensor: thermistor or thermocouple. Both schematics are combined in one picture below.

In both schematics the accurate operating amplifier MCP602 that implements rail-to-rail technology is used. This amplifier significantly increases the accuracy of the temperature readings and produces near full voltage supplied to the output pin. So the interval of readings on the A0 pin is 0-1023. You can replace the mcp602 amplifier with its analog. Using accurate operating amplifier allows the controller to keep the temperature of the iron inside the smaller interval.

If the iron handle implements the thermistor, the resistance of the sensor increased from about 50 Ohm when it is cold to about 200 Ohm when the temperature of the soldering iron becomes 400 degrees of Celsius. If the iron handle implements the thermocouple, the generated voltage increased from zero at the ambient temperature to 9 mV when the soldering iron reaches 400 degrees of Celsius. In any case, another iron handle can have the different parameters, so I decided to use a multi-turn potentiometer to tune the amplifier MCP602. For the very first time this potentiometer should be tuned the following way: when the iron is 400 degree of Celsius, the output voltage should become near 5 volts (reading of A0 pin in the Arduino about 900). To simplify the initial setup procedure the tune mode is implemented in the controller software. The tune mode can be run from the settings menu.

Initial Setup of the Controller

You need external thermometer to calibrate the controller. Do not forget to load default parameter of the controller from the setup menu.

The 500k multi-turn potentiometer has to be adjusted to get the operating amplifier the correct signal from the soldering iron. To simplify initial setup procedure of the controller, tune mode is implemented.

Select 'tune' menu item from the setup menu. The iron starts heating. The controller displays the temperature readings from A0 pin in the internal units (0-1023) in this mode. By rotating the encoder you can adjust the power to keep the iron temperature of 400 degrees of centigrade (use external thermometer). At the beginning you can increase the supplied power to the maximum value to speed up the iron heating, then decrease the power to keep the temperature at the 400 degrees. Now rotate the multi-turn potentiometer handle to get the sensor readings near 900. Ensure that this readings is not the maximum one, rotate the variable register and get 930-950, then return back to 900. It is important because the controller should be able to measure the temperature greater than 400 degrees of Centigrade.

When the variable register adjusted, press and hold the encoder handle for about 2 seconds. The initial setup procedure now is complete.

The main feature of the second generation of the controller is high frequency PWM signal used to heat the iron. Unfortunately, managing high-frequency signal on MOSFET transistor requires extra elenents in the schematics. This forum thread explains the problem in details. In short, the MOSFET has capacitance in the gate that require time to charge or discharge. To increase the speed of the MOSFET (irfz44n), the two-transistor driver is implemented on bipolar transistors. You can use another bipolar transistor pair.

Zener diode (D2, 15V) is used to limit Gate voltage (Vgs) of the MOSFET while it is open because the power supply voltage is higher than maximum value of mosfet vgs voltage. The diode FR107 removes the power from the iron when the MOSFET is closed. You can replace this diode with another one, but you must use fast recoverable diode.

The resistance of the cold iron heater element is very low and some notebook power supply can refuse to work. The controller just resets and the iron remains cold in this case. To avoid this situation, the capacitor of 1000uF is implemented just after the 24v input (see complete controller schematics).

The automatic switch-off feature has been implemented in the second generation of the controller. This was a great challenge because the iron handle has no shock sensor or other way to verify correctly the iron is in use now or just is laying down on the table. The main idea was to use the value of supplied power to the iron. In the idle state, the controller decreased the power to the minimum value to keep the preset temperature. Unfortunately, the math dispersions of the temperature and the supplied power are not constant in the idle state and can periodically deviate. Tuning the PID algorithm parameters, i have stabilized the readings and minimized both dispersions. Now the controller in the idle state keeps the temperature dispersion as low as possible. The criteria of the iron usage is the power has been incremented slightly from the smallest value registered. This algorithm has been tested for a while and proved could be used for automatic power-off feature.

This solution is not very reliable so you can disable this feature if something will be going wrong. Also, the sketch contains the class for debug and tune the PID parameters manually.

You can implement another iron handle in your version of the controller, the handle can have the shock sensor or similar to surely distinguish the idle state.

There are the some difficulties to get 0802 display in some countries. So another sketch was released to support 1602 display. The sketch is available in the github distribution. Or you can use another brilliant project from Manoj, who created schematics in Eagle editor and created PCB to simplify the soldering process.

It is the great pleasure to use controlled soldering iron. It is heating quickly and keeps the temperature suitable for the situation. This version is silent.