Joystick and STM32duino controls RPi AIY board over serial console and Arduino decodes the MPC response to display song artist and title.

Joystick and STM32duino controls RPi AIY board over serial console and Arduino decodes the MPC response to display song artist and title. 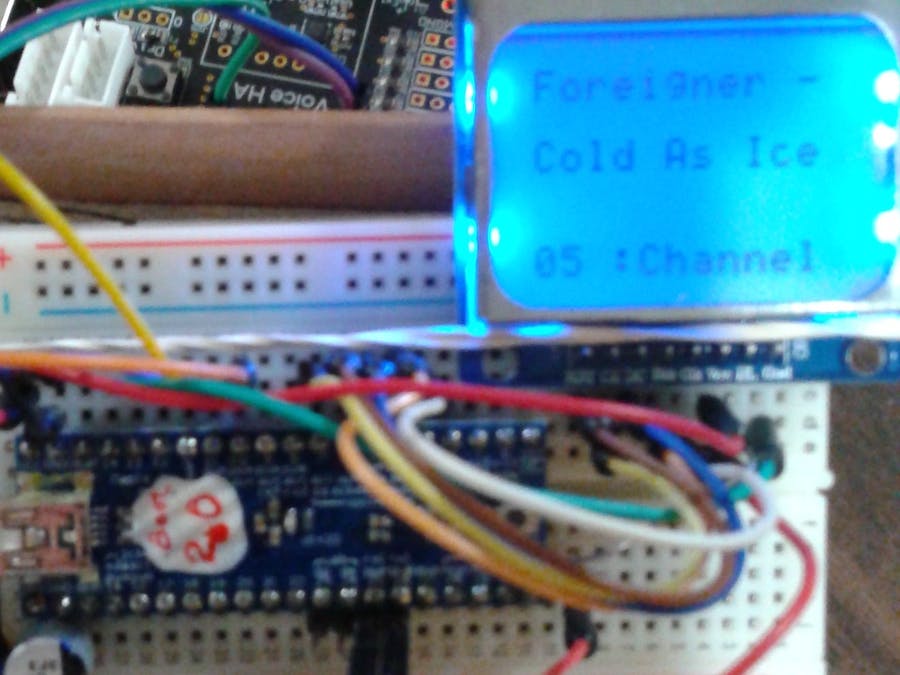 Victor Van Hee tells the story of how to convert a Raspberry Pi 3 and the Google AIY board to stream Internet Radio: here on Hackster

5 Modes assigned to the Joystick

This project builds on Victor's configuration by using an Arduino STM32, a Nokia 5110 LCD, and a common joystick to manipulate the Raspberry Pi project using serial communications over the default serial console at 115200 BAUD. Using MPC commands, the STM32Arduino provides for changing stations, changing volume, and muting the RPi. The demonstration code provides for 10 stored favorite stations, but the list can be extended to include many more of your favorites.

As MPC on the RPi is instructed to change channels, the program will output to the serial console (over the serial port exposed on the AIY board) various lines of information. In this verbose response serial stream is the artist of the song and the name of the song. The Arduino software will identify and capture the artist name and the song title and parse the data to display onto the small Nokia screen - updates to the screen occur at a programmed 5 second interval to account for new songs being played.

The Arduino source code is fully commented and hopefully simple enough for medium-level Arduino programmers to feel confident to modify as required. While I view the code as non-complexed, this is best not a Newbie project as it does involve going into the RPi's SD card and making some edits based upon Victor's article. Impetuous readers are forewarned.

Testing has shown that it is not necessary to actually install and enable Google's Cloud Platform, GCP. This means you only need to start with the AIY download image, and make modifications to the Raspberry OS to enable the AIY board. In short, this means registering with Google for an ID is not necessary. If you already have done this and played with your AIY card, no problem as the MPD/MPC will work. The downside, of course, is you are unable to fully utilize GCP as described by Victor Van Hee to voice-activate MPC. Either way, you will definitely need to edit /etc/mpd.conf as Victor shows - but stop after Victor's instructions:

In this build, the Arduino has full control of the serial console without login. If this makes you uncomfortable, then stop here as this project is not for you. (Of course, you could add code to the Arduino sketch to login, but you are on your own. I have another project here on Haskter.io showing how to do that.)

Instructions are provided here: http://www.anavi.org/article/216/ Note that a more convoluted method is shown here but I had difficulty with this procedure. You should also enable the serial console in RPi configuration:

You will need to wire the Arduino power, ground, and serial to the AIY board. 3.3V and Gnd can be found on the SPI connector. RxD and TxD are identified below:

RXD and TXD on the AIY board

Maple Mini (and similar) information can be found on this link.

This is an Arduino multi-tab project, that means there are multiple.ino files and everything must be in the same directory. Only one external piece of code is utilized and is available here: http://arduiniana.org/libraries/streaming/

The basic premise of this implementation is to pass a serial command stream to the Linux serial console. In the software, this string sequence is broken down to a preamble, a command string, and a postamble. For example:

The command string represent the Internet URL + port number as shown below:

Mikal Hart's Streaming library is not required, but simply adds a bit of convenience to the coding (<<) by allowing us to easily redirect the output to the serial as well as the LCD as shown below in the snippet:

One of the many benefits of a multi-tab Arduino project is the ability to easily organize the software sketch. When done correctly, the Arduino build system will combine the multiple.ino files before compile and all of the benefits of Arduino such as automatic function prototyping will work as expected. The resulting code is very, very simple to understand:

Our program loop is simply five (5) functions that are repeatedly called.

Extending the number of stored channels

Extending the stored number of channels in the array is rather simple. Currently there are 10 examples stored, the number is represented by the variable:

and the last channel in the current array is:

element msg11. Therefore to add a new station, simply put the IP:port into msg[12] and change Channels from 10 to 11. Edit the function ChannelChanger to extend the case logic. Recompile and upload to the Maple Mini.

There are many links to Interent Radio Stations that can be found with Google. I found it helpful to open an SSH session to the RPi to test with MPC these various stations, noting the ones I preferred to include in the code.

The joystick presently implements a 0.5 second delay after as well as a +/- 5 (about 12%) dead-zone before activation. Both of these values may be changed to suit the individual. This is hardcoded through the joystick functions. For example:

After the RPi reboots, it may takes as long as 30 seconds before the Arduino can get and initialize an audio session through MPC.

I hope you enjoy my joystick control for Internet radio. The entire "joystick" thing came about because I have been using SSH for about a year for changing the stations on the RPi/AIY Internet player. My wife commented on the project and wanted to know why she could just not work the player as she does in her automobile: only her favorites saved in pre-sets and volume up/down simply. And so the results were implemented. I believe that this joystick implementation may well be the basis for many future projects, the implementation is extremely easy.

As always, have fun,

What about using a RPi Zero_W?

Seems to work OK in testing. I did configure everything on a RPi 3B and then just switched the mini-SD. Below is the TOP display: