Arduino on the ESP32 is a match made in heaven: One core for RF and one core for Arduino; but you can cheat and get more Arduino resources.

ESP32: In Love With Both Cores

ESP32: In Love With Both Cores

Arduino on the ESP32 is a match made in heaven: One core for RF and one core for Arduino; but you can cheat and get more Arduino resources. 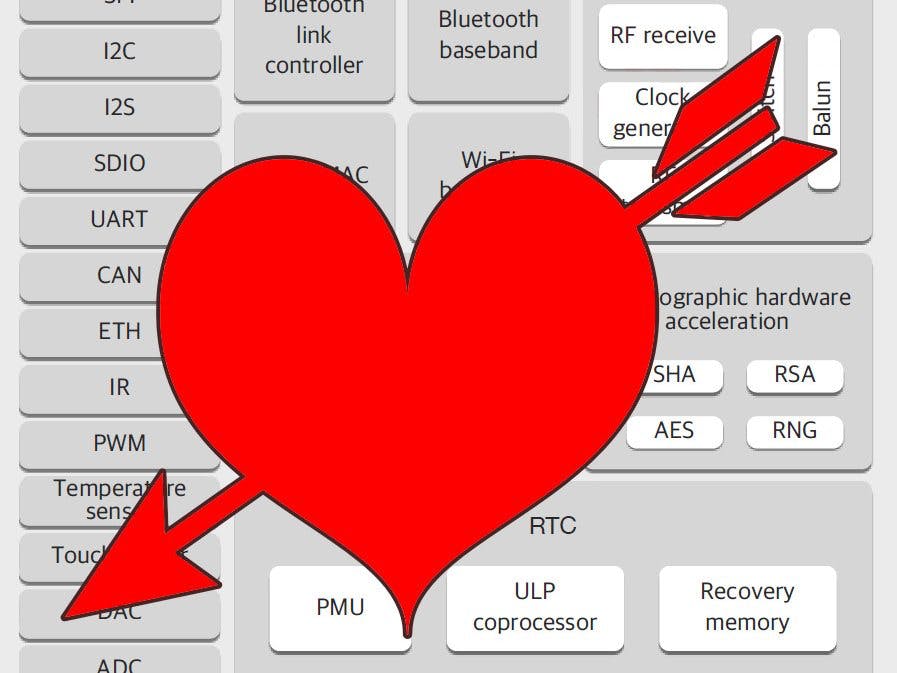 Arduino on the ESP-32

Until Espressif implemented FreeRTOS into the Arduino build process for the ESP-32 core, programming was pretty much a core_0 and a core_1 proposition ... like the lyrics above: one or the other!

Today, the ESP-32 Arduino Core is becoming mature and the under $5 U.S.D. Wemos ESP-32 Lite board packs a serious bang-for-the-buck! The default configuration assigns the first core (core_0) to the RF radio stack and protocols and the Arduino code is compiled to run on the second core (core_1). FreeRTOS manages everything and the programmer does not need to be reminded which core does what. Things just work.

Surely all of us hackers out in the Ether cringe when we think about default scenarios; toys were made to hack! And hack we shall.

Hopefully from reading the introduction above, you know that the cores in the ESP-32 are numbered as core_0 and core_1. Espressif code lives on core_0 and Arduino code lives on core_1 and for most users that is just fine. But for those on this journey that came up from the ESP8266 Arduino implementation, you will recall that all code ran in contention for the resources of one core. For the most part, the ESP8266 could work serious magic on just that one core. With more resources available, the ESP-32 would have been thought of as a fat-ESP8266 were it not for that second CPU. Therefore, the thinking goes that maybe core_0 is not as busy as the single core of the ESP8266 and if that is correct, the Arduino side should be able to steal a bit of time from the core_0 and run an Arduino workload on both cores. Intriguing.

Espressif has the (almost) entire documentation for the ESP-32 on the web at this location. The specific code that an Arduino sketch writer needs to create tasks is detailed here and looks like this in a sketch:

From the above, I have created Task1 (a function name) and my intentions are to run that task on core_0. &TaskA refers to a new object handle created by the earlier code statement:

Looking at the above code, I also created a Task2 (function name):

And TaskB will run on core_1 which is the default core for all Arduino code.

Task1 and Task2 are represented by two functions of the same name. In my Arduino code, I call the representative tabs Task1.h and Task2.h Code runs within the functions (workLoad) and that code (in this example case) is running the same workLoad, just a bunch of math to consume cycles: In reality different work would be performed by each named function. The functions have a context handle, TaskA and TaskB, respectively which was created by the TaskHandle_t type statement.

core_1 is where Arduino code runs by default. This means that setup() runs on core_1 as does loop(). It stands to reason that in the default operation, core_1 handles everything that happens in the loop() section. By defining a new Task2, we add a second task (function) to core_1 which is the TaskB object handle. This is an important concept.

By extension, Task1 (a function with some work to do) is running in the TaskA context (handle) and is running on core_0 so this becomes an additional task for however many Espressif tasks are already running on that core. Object handle TaskA then is essentially stealing time from the RF section which is assigned to core_0. Care should be exercised on loading core_0 because just as in the case of the ESP8266, if the protocol stacks are not serviced regularly, the system can become unstable and even crash.

Making it all work

Anyone who looks at my past Arduino sketches know that I am a big believer in keeping the Arduino sketch organized and I really am disturbed when I see hundreds of lines of code in just one tab. I organize by tabs, but this can easily break the Arduino default behavior of automatic declaration of forward references. Therefore, when one breaks-up long code, it is often necessary to add a forward reference which would not normally be needed in a one-tab project.

Below is the complete code. A ZIP is attached since cut & paste often fails due to invisible control characters.

Special thanks to Andreas Spiess: check out his YouTube channel. What to expect on the serial terminal for output:

By default, Arduino code is a single task and is assigned completely to core_1. Espressif RF protocols and control code runs exclusively on core_0.

With some very simple code, we can create a task (one or more) and assign the new task(s) to a specific core. The loop() block in Arduino will continue to run even if there is no code in this section; however FreeRTOS will manage everything. My multitab Arduino project can be used as a template for your own code. The small delay(10) statements are required in this example to allow the serial print buffer to spool without creating garbage on the serial connection.