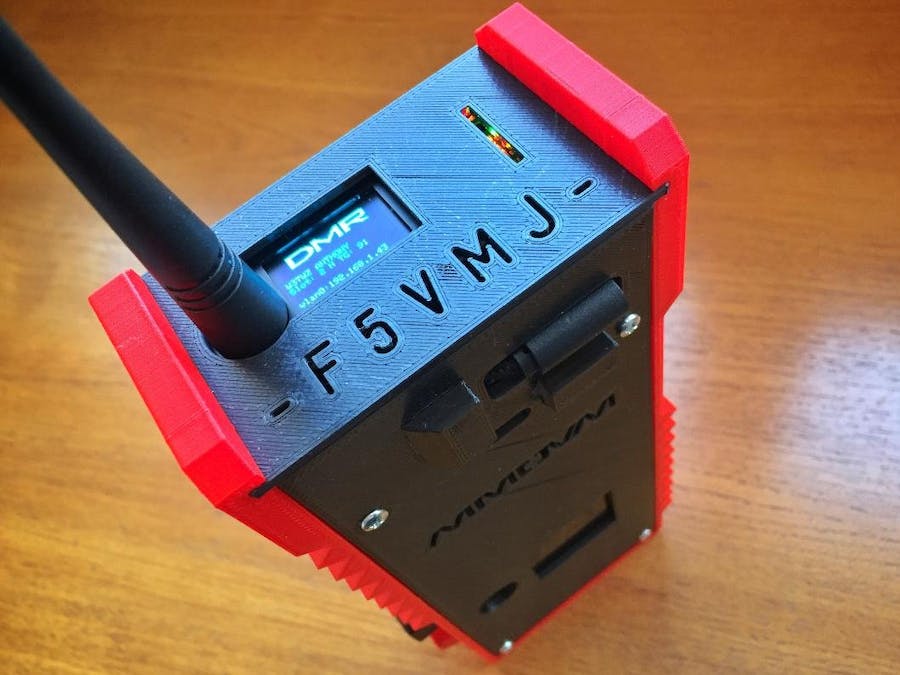 Spurred on by my hamradio friends back home after recently moving to another country, I finally delved into the new digital voice modes after some initial hesitation. Is it real radio? In part, no. It feels more like accounting than engineering when filling in all those fields and settings needed to configure digital voice. However it does allow worldwide ham to ham communications when the ugly realities of space, building regulations and noise levels make it impractical to work HF from a small city apartment. As long as there is a tube to the interwebs, be it when at home or when mobile, we are good to go.

For mobile and portable operation we can use digital repeaters which are linked to the internet when we're out and about.

In our home shacks, personal hotspots give us the possibility to be self sufficient with regards to repeaters, or indeed if no digital repeaters exist within range of our homes.

These hotspots are tied in to our individual house router, normally with WiFi or ethernet and of course have limited range. Portable battery powered hotspots do exist but are few and far between. A popular option is to create a WiFi hotspot on your mobile phone and access the internet by hitching a ride on the 4G ether waves. However, this does have the disadvantage of occupying your phone's internet resources as well as draining its battery.

For a portable hotspot option there aren't many commercial products available. The few sold are full of fancy functions that would never be used and priced quite high. They also often relied on a mobile cellphone for the connection to the outside world. Finding a self contained portable digital voice hotspot with a lot autonomy and a dedicated 4G connection was hard. A unit that could be carried in a rucksack if needed and that could operate for many days without needing to be charged.

A few inspiring amateurs had already documented versions of their portable hotspots which are listed at the end. Building a version to individual requirements is not that difficult. It's just a case of interconnecting and configuring three basic components. Just a hotspot, a 4G connection, a power source...easy peasy lemon squeezy.

The opensource MMDVM project makes for an affordable simplex hotspot and runs atop the ubiquitous Raspberry Pi Zero single-board computer. These are often called Jumbospots online and are easily found cheaply in boxed versions with Pi-Star already pre-loaded. An almost turnkey version. It does need a final configuration to individual requirements of course. An even cheaper solution is to assemble it from it's individual component parts and load it up with Pi-Star yourself. A straightforward affair.

The TP-Link mobile 4G router was the dearest part of this build. Having said that, it does double up to provide a personal WiFi network serving up to 10 connections and 150Mbps downloads. It can also be used as a backup to the internet connection at home or when traveling. It was nice to have it when a construction worker cut through fibre optic cables and rendered 20000 households without internet for a week during my second Covid confinement.

Bigger is better. A 26800mAh high capacity battery seemed ideal. Apparently a value just below the maximum limit that aviation regulations will allow in carry on baggage (<100Wh). This makes these batteries very popular and competitively priced. The small store bought hotspot options encountered have battery saving features like sleep modes which help stretch out their autonomy. Also, they don't have any 4G connection to power as this is usually provided by your mobile cellphone. This drains less of their battery but more of your mobile phone's battery.

This self contained homebrew version powers everything. The portable 4G router used here will no doubt implement battery saving technology. However, this cannot be said for the Jumbospot which is essentially designed to run at home from a wallwart, sucking up an endless supply of electricity gathered from one of the 56 nuclear reactors which are at my disposal.

I measured anywhere between around 150mA to 200mA of current consumption by the Jumbospot depending in what state it was functioning. Without a display fitted this can be substancially reduced.

Using the quick and dirty formula of Battery Life = Battery Capacity in mAh / Load Current in mAh, will give us a very rough idea of autonomy expected. It does not cater in other factors like temperature or age. However we should be good to go for many days between charges dependent on hotspot usage. Using an 'IEsafy Batterie Externe 26800mAh' or something similar. With its two 5V outputs, each capable of a hearty 2.1 Amps. One-click ON and two-clicks OFF.

This does not deserve to be called homebrew electronics. Everything is done with just two short USB to micro USB cables coming from the battery outputs. One powers the Raspberry Pi Zero in the MMDVM hotspot and the other powers the 4G router. In fact, it trickle charges the latter as this has its own small battery.

Using 25cm long hookup cables with 90 degree USB micro connectors, reduces the profile of the enclosure to keep things compact. The correct orientation of these right angle micro USB connectors should be double checked. The standard USB connectors from the battery outputs can also be 90 degree elbows. Their left hand or right hand orientation should be checked also, although this is not critical if using reversible USB connectors which give seemingly magical connecting flexibility.

So as to keep the unit as tidy as possible, I printed my own case to house everything. The STL files are available on Thingiverse to download, print or modify.

THE CAVEATS, REGRETS AND IMPROVEMENTS

Power savings. The large battery provides long operating times but is somewhat cheated on by no real battery saving options in the Jumbospot. Lowering the Pi-Star RF level will help a little. Operating without any display or leds will help a lot. Although this does spoil the project's operability and attractiveness I think.

Charging time is never-ending. The 26800mAh of juice takes an age to charge to 100%. Factor this into your portable preparation, or get caught short.

You will need a SIM card. There are cheap unlimited data plans here in France. We're lucky. This 4G router displays your data usage if you don't have an unlimited plan and need to keep an eye on things. In any case, this application is not very bandwidth heavy. You can also configure Pi-Star to preferentially use other known local WiFi networks first. Like when you are at home or when you grab a latte in Starbucks for example. It will flip to and from local WiFi and 4G.

Battery status? There is a peep hole to view the battery's state leds. Often difficult to see with my longsighted eyes. Having a battery with leds on the opposite end would have allowed a cut out in the base of the case and make for easier viewing of the battery's remaining charge. For a future version.

Use 18650 cells. Is it worth having a power source made up of 18650s and an associated TP4056 charger circuit in a future version? Probably not, as external high capacity battery banks are so competitively priced with all this already built in.

Battery cannot be charged and provide output simultaneously. I disconnect or turn off the Jumbospot and TP-Link whilst charging. Is there another battery which will do this automatically? For a future version.

Replacing the antenna. As Nike said...Just do it! Why? Because this is as close as you will get to dabbling in real radio. The hard stubby antenna provided in the Chinese Jumbospot kits does radiate the meager RF output over short distances but I doubt it's actually tuned. Flexible alternatives from Nagoya or Diamond are available which are better in performance and flexible. They can bounce about inside a backpack without worrying so much about straining and breaking the SMA PCB connector. Otherwise a really short black suppository style aerial is fine too. Many cheap dual-band Chinese antennas abound which exhibit poor performance on 2m but will tune well on 70cm. Caveat emptor. Your mileage may vary.

Improve the design of the case. To better accommodate each of its three components and make it stronger and more compact. It's portable but it's big by modern standards. A cross between an old Motorola MT-500 and a ship's EPIRB. It's bigger than my Anytone, by a lot. For a future version.

Make a smaller version. Is it necessary to have such a large battery? Is there a smaller 4G router? Use a less power hungry Jumbospot? All things to consider for a future version.