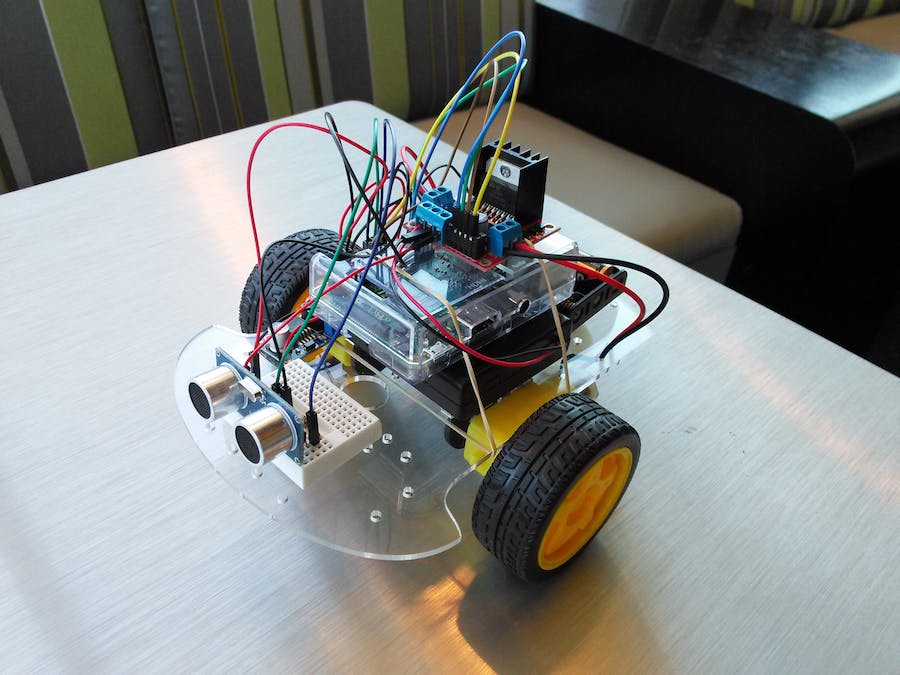 There is something about robots that have captured my imagination as long as I can remember. They are my comfort zone whenever I embark on new Maker adventures; as soon as I get past the “blinking LED” project, a basic robot is always my go to project when learning a new platform or technology. And so, when I decided to give Windows IoT Core a try, this project was naturally my starting point. The Rover is a simple robot so it’s a good place to start but it’s also infinitely expandable.

This initial Rover project creates a little robot that runs around your living room on its own. It just drives straight ahead until it detects an object blocking its path. At which point, it turns until it can find a clear path and then its full speed ahead again. The heart of the Rover is a Raspberry Pi running Window 10 IoT Core. The two motors are driven via a dual H-bridge motor controller and an ultrasonic distance sensor is used to detect obstacles. The Rover can be built on any rolling chassis; I selected a low cost one that is readily available from a variety of retailers around the world.

This is a beginner project and no advanced software or hardware skills are required. Excluding the pre-requisites, this project can be completed in 1.5 to 2 hours if you have any Arduino or similar microcontroller experience.  If this is your very first electronics project, I recommend that you spend a couple hours watching a few introductory Arduino and Raspberry Pi videos prior to getting started.

I have a few enhancements still to make:

If you try any of these enhancements or any others you come up with, please leave a comment and let me know how it went.

Here are some online resources that I found very helpful throughout the course of this project:

Note: It will take 2-3 hours to complete the pre-requisites but most of that time is unattended.

There are several robot kits on the market that will work with this project. You just need a kit with two driven wheels and a third for balance. Follow the instructions which came with your robot chassis kit to assemble the base plate, motors, and wheels. I found a YouTube video showing the assembly of a robot kit very similar to the one I used.

Tip: I route the motor wires up through holes in the base to keep them from getting caught by the wheels.

Instead of using the 4 x AA battery holder that came with the robot kit, I used a different one with a cover and an On/Off switch. This is an optional substitution as it doesn’t change the performance or functionality of the robot at all. I just like the convenience of easily turning off the power to the motors using the switch built into the battery holder. Since I mount the Raspberry Pi directly on top of the battery holder, it’s a little more difficult to remove a battery to cut power to the motors.

The battery case can be mounted to the base in a number of ways. If the robot base has holes that align with the holes in the battery case and you have the right size screws, you can screw the case to the base. Otherwise, use Velcro, double sided tape, or rubber bands. I used rubber bands and they worked fine. I mounted the case in the middle of the base to keep the center of gravity close to the midpoint of the base.

The L298N motor driver allows you to spin the motors forwards AND backwards using a handful of GPIO pins. First, connect the two wires you secured to each motor in the prior step to a pair of motor terminals – the red and black wire from one motor to ‘Motor A’ and the red and black wire from the other motor to ‘Motor B’. Polarity isn’t important and you can always switch the order of the wires later if your motor ends up spinning the wrong way when you deploy your code. Next, connect the wires from the 4 x AA battery holder to the power terminals – red to +12v input and black to Ground; the 4 AA batteries are the power source for the motors. Also be sure to run a wire from the Ground terminal on the L298N to a GND GPIO pin on the Raspberry Pi (pin 6).

The L298N was designed to support a single power source for both the motors and the microcontroller / computer. The full voltage from the power source is routed to the motors. At the same time, the voltage from the power source is converted and regulated to 5v for the microcontroller / computer and is supplied via the +5v terminal on the power block. However, through past motor oriented projects, I found too much variability in the power from the L298N’s 5v supply – i.e. when a motor stalls, there is a large voltage drop in the 5v output (large enough to reset the Raspberry Pi). Additionally, even without the motors running, I measured only 4.35v of output from the 5v supply. While in reality, that was enough to power the Raspberry Pi (even though the Raspberry Pi’s specification state that it is below the minimum voltage required), I didn’t want to take any chances – it’s no fun chasing inconsistent behavior in the Raspberry Pi especially when it might be due to very minor voltage changes. Therefore, for this project, I decided to use two power sources – one for the motors and one for the Raspberry Pi. Earlier in this step, we connected the 4 AA batteries to the +12v terminal to power the motors. In the next step, we’ll connect the 3 AA batteries to power the Raspberry Pi.

But while we are setting up the L298N, we’ll go ahead and link the power from the Raspberry Pi to the L298N. First, remove the physical jumper – labeled ‘5v enable’ in the photo – from the L298N. This sets the motor controller logic to be powered by the Raspberry Pi via the +5v terminal on the power block rather than from the power source connected to the +12v terminal.

Important: Make sure you remove the physical 5v enable jumper on the L298N. If you don’t, then the L298N will output a variable 4-5v via the +5v terminal which may cause performance issues with the Raspberry Pi.

Now, your connections should match this diagram:

Either solder the red and black wires from the 3 x AA battery holder to the In+ and In- solder pads respectively on the DC converter or, for those without a soldering iron, hook the ends of the wires into the solder pads – labeled ‘Power input from battery’ in the photo – and wrap the electrical tape around them a few times. Put three batteries into the holder and use your mutlimeter to measure the DC voltage out from the DC converter. Use the converter’s built in potentiometer to “dial-in” an output of 5v.

Lastly, connect the output of the DC converter to the Raspberry Pi. Using the wire strippers, I cut the male ends off two male / female jumpers, stripped a little insulation off, tinned the exposed wire, and soldered them to the Out+ (red jumper) and Out- (black jumper). Alternatively, twist the exposed wire strands, hook them on the solder pads on the DC converter, and tape. Connect the female ends of the jumpers to a 5v pin (red wire to pin 4) and GND pin (black wire to pin 14) on the Raspberry Pi.

The HC-SR04 has 4 pins – VCC, Trig, Echo, and GND. I mounted the sensor into a mini breadboard to steady it on the robot as well as to simplify all the necessary connections. VCC on the sensor should be connected to 5v so use a male / male jumper to connect the distance sensor’s VCC to the power rail on the breadboard which was created in Step 2.

As an aside, here is a chart to help you read the color bands on a resistor for future reference. You'll use it more often than you think.

Step 5: Mount the components to the robot chassis

Download the source code from GitHub and load the project into Visual Studio. The main part of the program is straight forward - just two while loops. As long as the GPIO pins initialized properly, the first while loop drives the robot forward indefinitely. Nested within is a second while loop which simply turns the robot to alter its course as long as an obstacle is in its way.

Tip: If a motor is spinning in the wrong direction, either swap the pin settings in the code or swap the physical wires from the motor in the terminal block.

This initial project only required forward, right turn, and stop. However, in the code, you will see subroutines for reverse and left turn as well. That functionality is commented out for now; I left it in as it will soon be needed as I expand my project.

The ObstacleDetected subroutine simply compares the robots distance to a detected object and determines whether the robot is close enough to warrant a course change. The specs for the distance sensor state that it can measure distances up to few hundred centimeters. Just because the wall on the other side of the room is a 300 cm away doesn’t mean that it’s currently an obstacle and that the robot needs to make a course correction. Therefore, I arbitrarily picked a distance of 30 cm – any object less than 30 cm in front of the robot is considered an obstacle and therefore, will need to be avoided via a course correction.

The DistanceReading subroutine controls the distance sensor to take a reading. The process for getting a distance reading is as follows:

After everything is running perfectly, you can set the program to run at start up so that you don’t need to manually start the program; instructions can be found here on how to set the program as the startup app. 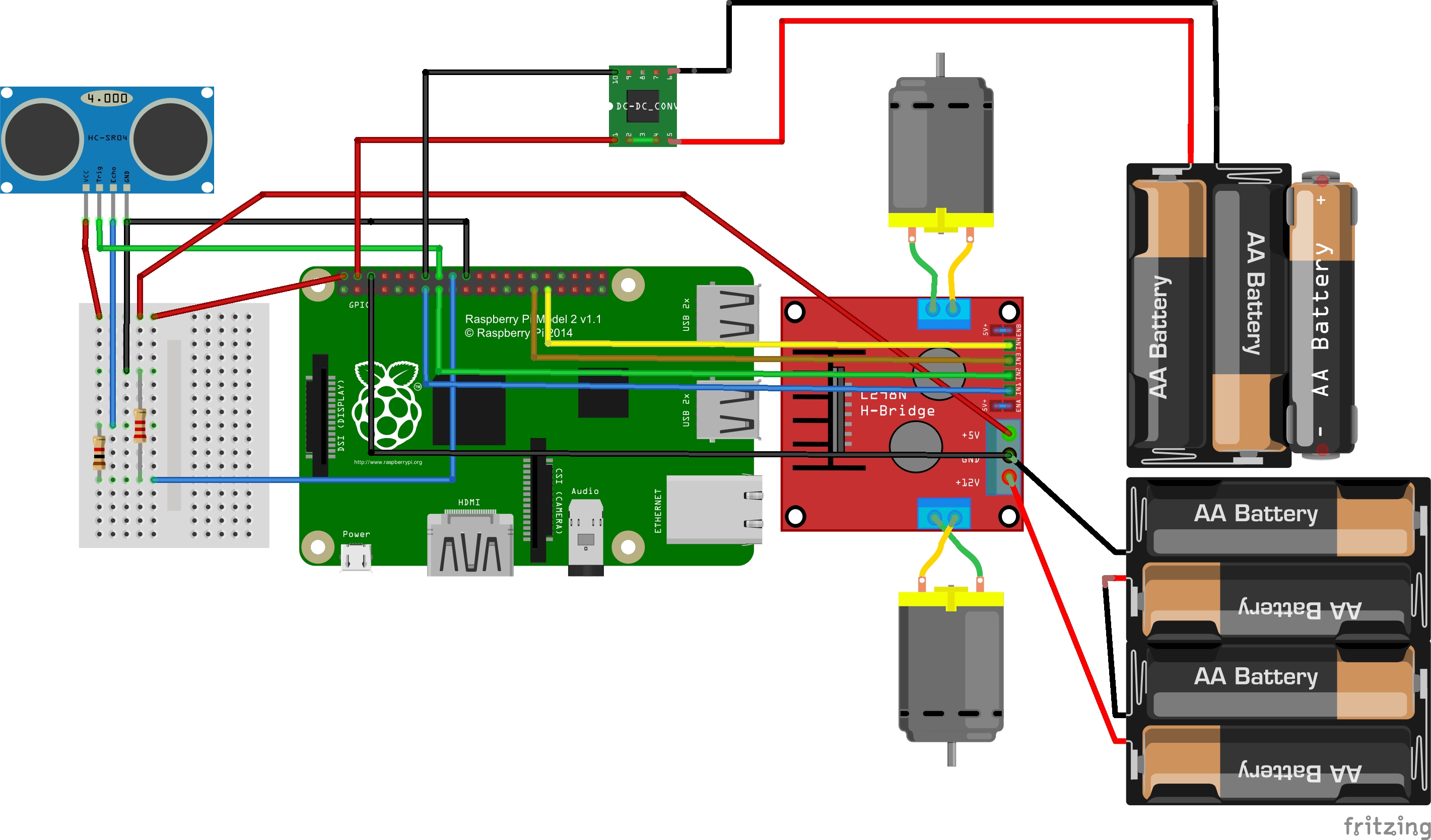