This IoT incubator will maintain just the right temperature for your bacteria cultures. And, it will alert you if something goes wrong.

This IoT incubator will maintain just the right temperature for your bacteria cultures. And, it will alert you if something goes wrong. 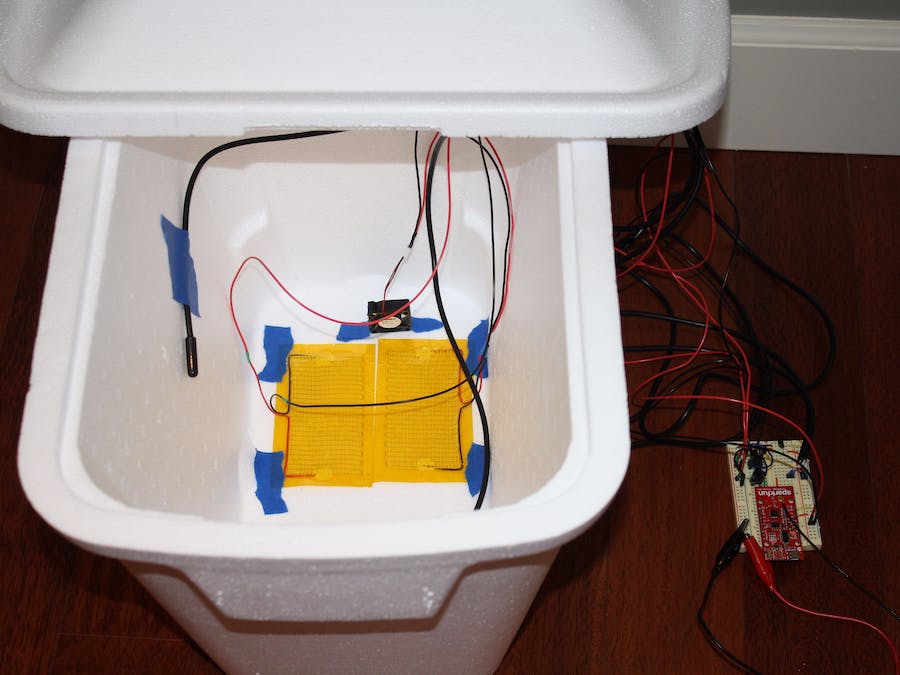 I've expanded the type of monitoring I do on our local creeks. Initially, I started with basic water temp - see my Salmon Stream Monitor project. Then, I manually started conducting water chemistry related tests - alkalinity, pH, hardness, etc. Now, I want to start doing bacteriological monitoring - primarily E. coli and secondarily other coliform bacteria. However, in order to be able to count the bacteria, I need to incubate the samples at a temp of 29 to 37 degrees Celsius for 30 - 48 hours.

One the samples get cultured in the incubator, it's easy to count the amount of bacteria.

I could purchase a basic Styrofoam incubator for about $80, but they aren't "smart". For much less, I can not only make my own but also make it Internet connected. An IoT incubator could report the temperature regularly and send me email or SMS messages if something goes out of range.

The incubator is made up of a couple of heating pads, an fan, and temperature sensors all of which are controlled by a microcontroller. Everything but the microcontroller is placed in a disposable Styrofoam cooler. The microcontroller turns the heating element off/on to maintain the set temp and the fan circulates the warm air to keep the entire cooler at relatively the same temp. Temperature data and heater status (off / on) are sent to the cloud every minute. Alerts are sent to my phone from the cloud platform if something goes out of range.

For the hardware, I chose SparkFun's ESP8266 Thing Dev board. I've used it before so I not only had one on hand but also already have the Arduino IDE set up for it. The SparkFun Thing Dev has WiFi capabilities, more than enough GPIO pins, and an analog digital converter (ADC).

For the cloud side of things, I chose Ubidots. I liked their feature set and it was easy to integrate with their platform. They also have their own libraries for a variety of microcontrollers but I already had MQTT setup on my ESP8266 using Nick O'Leary's Arduino client for MQTT so I merely had to change the address of the MQTT server and add my Ubidot's security token to the connection string.

I started with a single heating pad but even though the 5x10cm pad is using about 11 watts (9v and 1.2a), I couldn't get the incubator temp much over 33 degrees. Even though that could work, I added a second heating pad to give me some head room. With two heating pads, the incubator reaches operating temperature (33 degrees) in less than 10 minutes and has a max temp of 39 degrees C.

I found both types of temperature sensors easy to use. When using the LM35, the key to converting the analog signal to a temperature is knowing the analog reference of your microcontroller. The ESP8266 Thing's ARef is different that the Arduino's (which was used for most of the examples I found online) so I needed to adjust the formula accordingly. The nice thing about the DS18B20 temp sensor's is that you can run several sensors on the same GPIO pin; the 1-wire protocol required for the DS18B20 seems to be well supported across a variety of microcontrollers so that wasn't an issue.

Here are some items you need to take care of before starting the project:

This project isn't a getting started guide for the ESP8266; there is quite a bit of information available online about these devices and Sparkfun's tutorial for the Thing - Dev Board (the specific ESP8266 board I used for this project) is more than sufficient to get you started. The Sparkfun tutorial also has detailed instructions for adding support for ESP8266 boards to the Arduino IDE so follow those if you need help getting your development environment configured properly; I had no problem getting the SparkFun ESP8266 Thing Dev board working with the Arduino IDE version 1.6.8.

Nick O'Leary's Arduino Client for MQTT - aka PubSubClient - is available via library manager so install it that way. If you aren't familiar with the IDE's library manager, Arduino has documentation on how to use it.

Ubidots has several pricing tiers but the free tier is more than sufficient for this project. You can create an account at http://www.ubidots.com.

Wiring the incubator consists of connecting the various components - heating pads, temperature sensors, and fan - to the microcontroller. As I mentioned in the summary, I realized that I needed to keep the fan on all the time so instead of controlling it with the microcontroller, I just wired it directly to the 5v power supply. The temperature senor wiring is relatively straight forward; all the temp sensors have a 5v power and ground connection. The LM35 also has a signal connection to the microcontroller's ADC pin while the DS18B20's signal wire connects to a digital pin. Both the DS18B20 sensors can all be connected to the same pin as the 1-wire protocol is able to address each sensor individually.

I connected the heating pads, fan, and temp sensors with about 3 feet of wire so that I could easily place all those elements inside the incubator while keep the microcontroller outside it.

I am still learning my way around Ubidots so there may be other ways to setup the backend but this is how I did it. First, I created a data source named 'incubator'. Then I added four variables to the 'incubator' data source so that I could track various aspects of my incubator - ambient temperature, bottom temperature, top temperature, and heater status. Ubidot's data source seem to be the same concept as an MQTT topic to which you publish data. And, variables are the data elements you want to track within each topic.

One thing to note is that the code references data sources and their variables using their labels - not their names. Here are the labels I set up for each element:

In addition to viewing the data for each variable, you can create graphs on the dashboard. I created a basic line graph and plotted the bottom temperature and the top temperature so that I can easily see what's going on in the incubator.

Step 3 - Edit and Deploy the Sketch

You can download the sketch from the GitHub repository. Before deploying it to the ESP8266 Thing Dev board, you'll need to edit a few variables via the Arduino IDE. First, enter the connection information for your WiFi network.

Finally, if you used different data source and variable labels, you will need to update the topic parameter in the publish() function and the JSON object names accordingly.